Even before the Hurricane entered production, Sydney Camm had begun to work on the Typhoon. It was developed at Langley but its manufacture was to be contracted to Gloster Aircraft. The cockpits on early Typhoons were fitted with ‘car door’ style access hatches. These were later dropped in favour of the sliding ‘teardrop’ design.

The profile of the wing shape was relatively thick and this provided space for large fuel tanks. The wings also had great structural strength which made the aircraft a steady gun platform and allowed for heavy guns and underwing armament. The development was fraught with difficulties however, and it took some time to create one of the most powerful fighter-bombers of the Second World War.

On an early test flight on 9th May 1940, the first prototype, P5212, suffered a structural failure at the join between the front and rear fuselage which was about the rear of the cockpit. The pilot, Philip Lucas, could see the split but rather than bailing out and allowing an out of control aircraft to end up wherever, he landed the aircraft safely. Lucas was later awarded the George Medal for this action.

…‘Another curious thing used to happen on the many occasions on which I ferried Typhoons from Brockworth, in Gloucestershire, to Lichfield in Staffordshire. A direct route was not on because of the Birmingham balloon barrage, so one had first to fly to a junction on a main railway line between Coventry and Birmingham. And as I soon found out that I could only reach this important point accurately if I deliberately flew on a compass course that was wrong by 10°.

The reason turned out to be most odd. The Typhoon’s undercarriage folded up inwards, so that in flight the wheels were tucked up in the fuselage, near the compass. The two undercarriage legs of the Typhoon were made by two different firms. The firm that made the starboard legs didn’t demagnetise them as thoroughly as did the firm that made the port legs, so that on a northerly course the compass needle was deflected by 10°. This didn’t show up when the compass was ‘swung’ and adjusted on the ground, for then the wheels were not retracted.’

In 1941, RAF Spitfire Vs were being outclassed by Focke-Wulf Fw 190s of the Luftwaffe so the Typhoon was rushed into production to meet this new threat. In service, several Typhoons were lost to unknown causes and the Air Ministry considered withdrawing the type.

At Hawkers, on an early flight, test pilot Ken Seth-Smith lost his life when his aircraft broke up in a level speed test. This ruled out pilot error and extensive testing and modifications were begun. It was found that there were structural weaknesses in the rear fuselage and especially the tail section. The Sabre engine could be difficult to start in cold weather and it also suffered high oil consumption.

The Typhoon in action

When the problems were resolved the Typhoon finally proved its worth, specialising in chasing the Fw190 and Me109 low level fighter bombers over Southern England. One squadron, No 486(NZ) claimed 11 such fighter-bombers in two months, part of a total of 20 between October 1942 and July 1943. As the Allies took the offensive, the squadron’s aircraft were later armed with eight 60 lb RP-3 rocket projectiles to attack enemy shipping in the English Channel.

Late in 1943, Typhoons flew their first missions over enemy territory armed either with the rockets or two 1,000 lb bombs. The Typhoon resembled the Fw190 from some angles, and in order to distinguish them, the Typhoons had high-visibility black and white stripes painted on their wings and fuselage, a scheme that was later adopted for allied aircraft on D-Day.

With the Liberation of Europe, Typhoon squadrons of the RAF’s 2nd Tactical Air Force operated from forward airstrips close to enemy lines and flew missions in support of the advance of allied ground forces. The Typhoons would dive bomb German armour, railway tracks and trains, bridges, barges on rivers and other infrastructure.

They were difficult and dangerous missions diving at well over 450 mph straight into anti-aircraft fire, releasing the rockets before pulling up and enduring G-forces which often caused pilots to suffer a momentary blackout. Crucially, when the pilot resumed consciousness, the blackout lasting just a second or two, he would find his rugged Typhoon climbing out of the action intact where other aircraft types may have broken up.

Armament consisted of four 20mm cannon and either eight air to ground rockets or two 500 lb or 1,000 lb bombs. A total of 3,317 Typhoons were built mostly by Gloster aircraft but fifteen of were built at Langley. 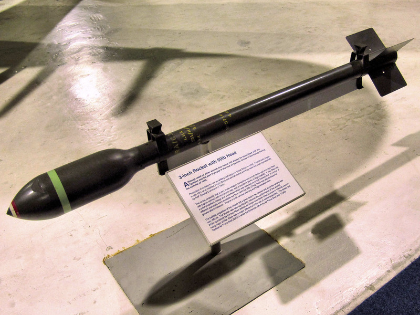 The Day of the Typhoon

This is an excellent account describing life on forward airstrips from which Typhoons operated from the Normandy landings and the Allied advance through Northern France. Seen through a young pilot’s eyes, The Day of the Typhoon by John Golley is sadly currently out of print. Very good condition copies can still be found on the internet. It is a very worth getting hold of a copy if you can.

Typhoon IB SW417 of 245 Squadron RAF, 1944. The image represents author John Golley’s aircraft though the registration may not be authentic 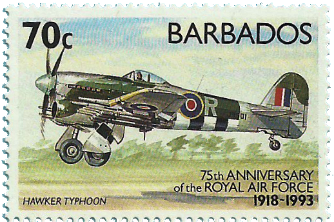 A Typhoon commemorated on a Barbados postage stamp issued in 1993