For anyone interested in seeing aircraft of Sydney Camm designs, this page is a list of interesting surviving Hawker airframes in the UK and where to view them. It isn’t a complete list and whilst Postcards from Slough will try to keep this page as up to date as possible. Anyone wishing to specifically visit a particular exhibit aircraft should check the owner’s website for latest information before they visit.

G-EBMB – The original G-EBMB is on display at RAF Cosford, Shropshire. An airworthy replica is also on display at the Shuttleworth Collection at Old Warden, Bedfordshire. 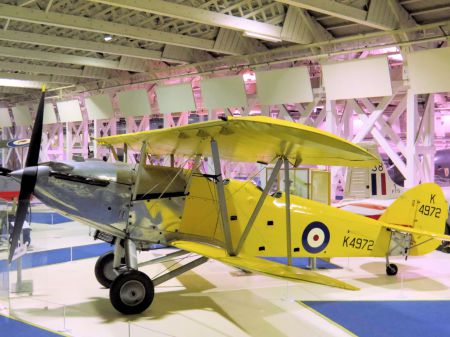 K4972 Hart Trainer is on display at the RAF Museum, Hendon.

K8203 (G-BTVE) is maintained in airworthy condition by the Shuttleworth Collection and represents No 64 Squadron RAF.

K5414/XV is kept in in airworthy condition in the markings of 15 Squadron RAF by the Shuttleworth Collection at Old Warden.

K5674 (G-CBZP) is in airworthy condition and is on display with the Historical Aircraft Collection at the Imperial War Museum Duxford. 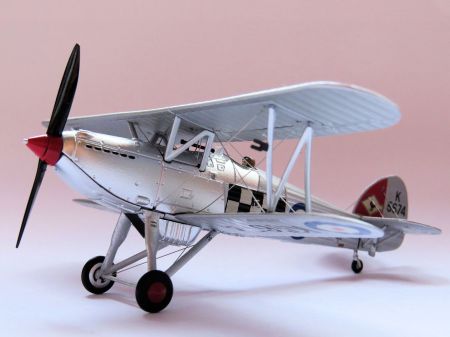 It was delivered to 43 Squadron RAF in 1935. In 1940 it was sent to the South African Air Force and was written off on a forced landing due to running out of fuel. It was returned to the UK in 2003 and restored to airworthy condition. The model shown above is a faithful 1/72 scale representation of the aircraft made by Corgi. 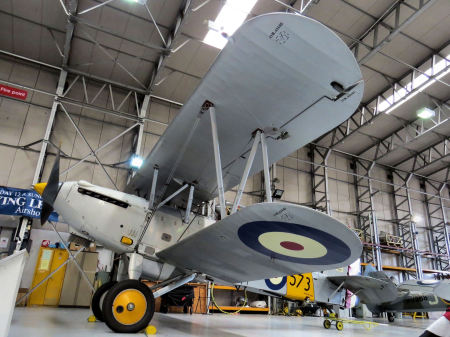 Since the late 1980s the RAF have been removing real gate guardians from their bases and replacing them with replicas built largely from resin. The originals are being restored to static display or even airworthy condition. The author will try to keep up to date on this subject but any updated information will be gratefully received.

R4118/UP-W (G-HUPW) Mk I in the markings of 605 Squadron RAF. It has been fully restored to flying condition.

Z5140 (G-HURI) Canadian-built Mk XII but painted to represent a Mk IIb of No. 126 Squadron RAF. Operated by the Historic Aircraft Collection, Duxford. 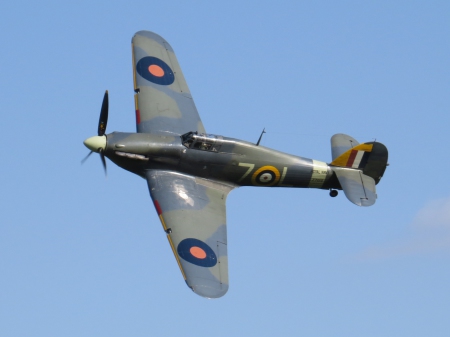 LF363/YB-W above Mk IIc is operated by the Battle of Britain Memorial Flight based at RAF Coningsby, Lincolnshire.

PZ865/EG-S, Mk IIC of 34 Squadron RAF, South East Asia Command 1944. Previous markings on this airframe have been JX-E of No 1(F) Squadron in 1942 and with its original registration PZ865 it was inscribed 'The Last of the Many!' being the last Hurricane built at the Hawker factory on Langley Airfield.

L1592/KW-Z Mk I is on display in 615 Squadron markings at the Science Museum, London 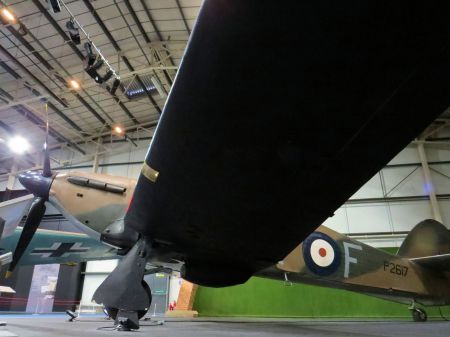 P3395/JX-B is on display in No 1 Squadron RAF markings at the Millennium Discovery Centre, Birmingham. Original registration for this Mk IV was KX829.

Z2315/JU-E Mk IIb is on display in No 111 Squadron RAF markings at the Imperial War Museum Duxford.

Z2389/XR-T Mk IIa on display in No 71 Squadron RAF markings at the Brooklands Museum, Weybridge.

LF378/UH-A above is a Mk II is on display at the RAF Museum Cosford. The markings were originally applied to an airframe with the registration BD867

BN230/FT-A Mk II is on display in No 43 Squadron RAF markings at the Hurricane and Spitfire Memorial Museum in Kent. Original registration LF751.

MN235 is the only complete Typhoon left and is on display at the Canadian Air and Space Museum on loan from RAF Museum Hendon. 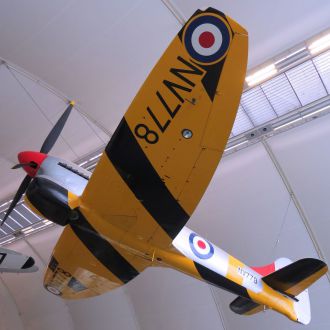 NV778 TT5 (above) is on display at the RAF Museum, Hendon 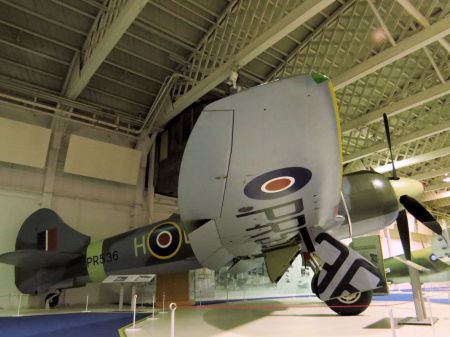 VR930/110 FB11 flies with the Royal Nay Historic Flight in the colours and markings of her original 802 NAS code of '110/Q' when she was first based at RNAS Eglinton, Northern Ireland, and then embarked in HMS Vengeance in 1948. 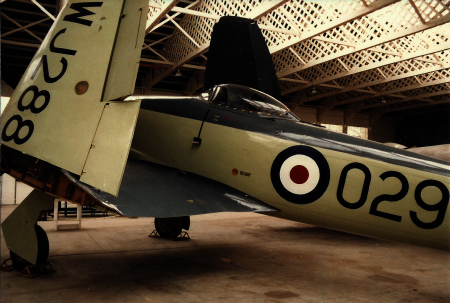 WJ288/029 FB11 on display at Duxford in 1987. This aircraft was taken to the US and restored to airworthy condition, sadly not to grace Britain’s skies. Last known to belong to the American Airpower Heritage Flying Museum in Texas in 2007 bearing black and white stripes and coded 153. 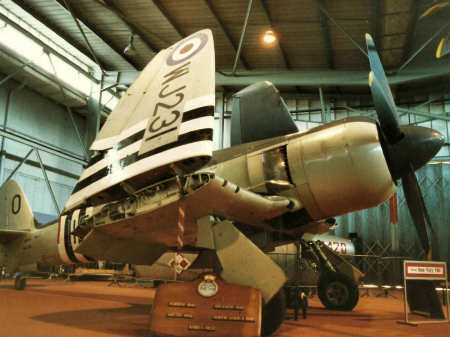 WV798/026. Since 2012 this aircraft has been undergoing restoration at the Classic Air Force in Newquay. 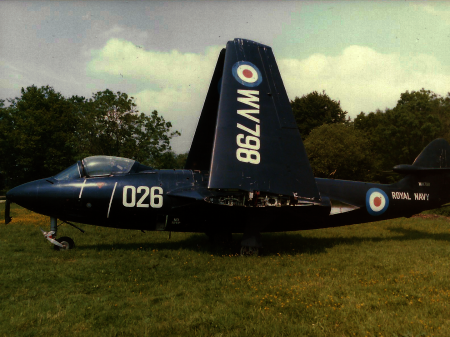 In 1981, WV798 was moved from static display at Thorpe Park to the Second World War Aircraft Preservation Society (SWWAPS) at Lasham as in the photo. By 2009 she had fallen into disrepair and was stored with Parkhouse Aviation at Booker until she joined the Classic Air Force, Newquay. 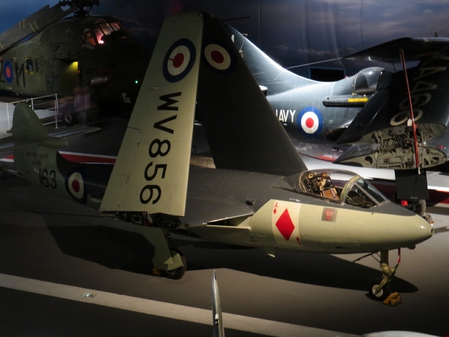 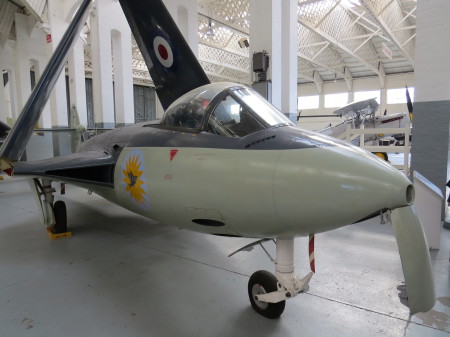 WV908/188 flies with the Royal Navy Historic Flight in the markings she wore with 806 Squadron at the end of her front-line career aboard HMS Albion. Currently, this is the only airworthy Sea Hawk in the World.

XP831 is on display at the Science Museum, London.

XP984 is on display at the Brooklands Museum, Weybridge.

WB188 was originally designated the Hawker P.1067 prototype. In May 1953 it was decided to fit a new Rolls-Royce Avon RA.7R to WB188. This engine was capable of producing after burn which increased the engines power output from 6,750 lbst to 9,500 lbst. The cockpit canopy was modified and a new pointed nose fitted. 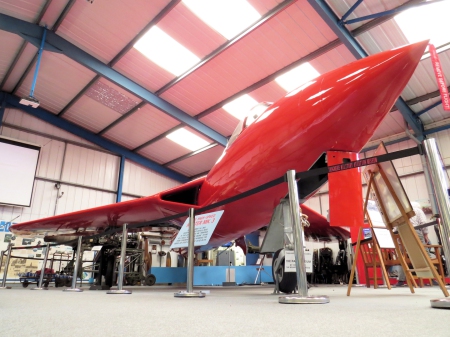 The aircraft was re-designated Hunter F.3 and at Littlehampton on 7 September 1953 Neville Duke set a new world airspeed record of 727·63 mph beating the previous record of 715·75 mph set by a USAF F-86D in July 1953. The aircraft is now part of the Tangmere Military Aviation Museum, Near Chichester, West Sussex. 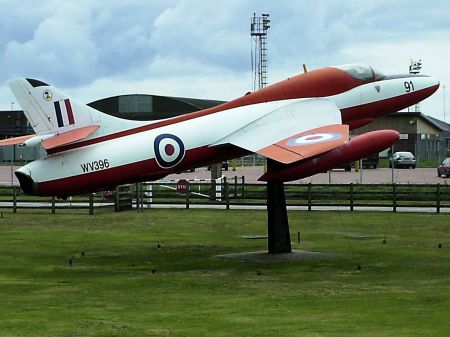 WV396/91 T.8C is a gate guardian at RAF Valley on Anglesey. XE627 F6A at the Imperial War Museum Duxford, Cambridgeshire 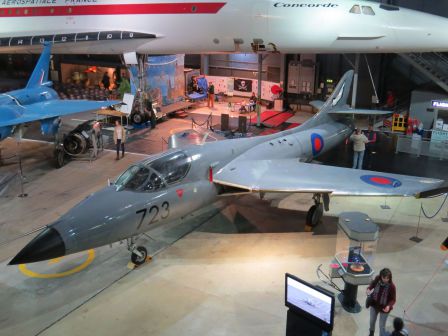 XL580 T.8M at the Fleet Air Arm Museum, Somerset. This unusual specimen has a Sea Harrier nose incorporating a Blue Fox radar and the cockpit is fitted with the appropriate instrumetation to replicate a Sea Harrier for a variety of testing and training scenarios. 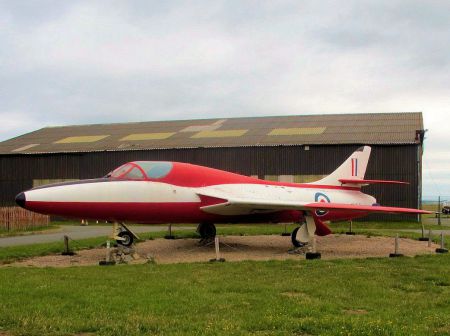 XL618 T.7 is on display outside of the museum at Caernarfon Air World in North Wales

XP831 is on display at the Science Museum, London

XP984 is on display at the Brooklands Museum, Weybridge

XS695 is on display at the RAF Museum, Cosford