The second son of John, King of England and Isabella of Angoulême, Richard was born 5 January 1209 at Winchester Castle. The house was Plantagenet. King John died in 1216 and was succeeded by Richard’s older brother who became Henry III and he made Richard High Sheriff of Berkshire at just eight years old. When he was sixteen, his brother made him High Sheriff of Cornwall by giving him the county as a birthday present. Very generous. 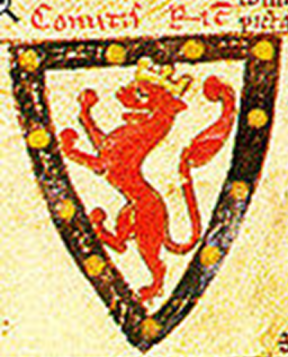 Revenues earned from Cornwall helped make Richard one of the wealthiest men in Europe. He campaigned on behalf of his brother, Henry III, in Poitou and Brittany which had been lost to the Plantagenet’s years before. Richard also served as regent three times but his relationship with his brother Henry was often fractious at best and he rebelled against him three times.

In March 1231, Richard married Isabel Marshal, wealthy widow of the Gilbert de Clare, 5th Earl of Gloucester. The couple had their honeymoon in Cippenham, now ward of Slough. The marriage displeased his brother Henry III because the Marshal family were rich and influential and often opposed him.

In the same year Richard acquired Wallingford Castle. He had other properties at Marlow and Cippenham. Richard had become stepfather to Isabel's six children from her first husband and the couple had four children of their own, only one of which, Henry of Almain, survived to adulthood.

Children of Richard and Isabel

Isabel died in 1240, she asked to be buried next to her first husband at Tewkesbury, but Richard had her interred at Beaulieu Abbey instead. However, he did send her heart to Tewkesbury.

Richard was opposed to the marriage of Simon de Montfort, VI Earl of Leicester, to his sister Eleanor. He rose up in revolt but was bought off with a gift of 6,000 marks from Henry III and peace was restored.

In the early 13th century, Richard commissioned the building of Tintagel Castle. It was a bit of a folly since the site held no apparent strategic significance. It is set on cliffs above a sea inlet on the north coast of Cornwall, 20 miles north-east of The Lizard. The perfect site for a holiday home. It deteriorated due to sea erosion by the mid14th century and was fully abandoned by around 1500. 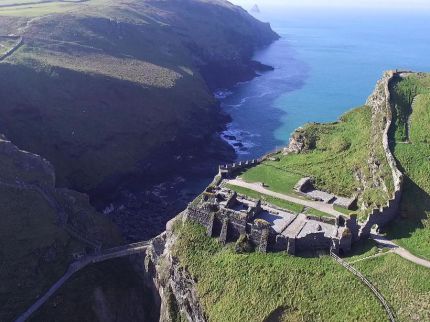 The site and surrounding area became associated with Arthurian legend during the 12th century by Geoffrey of Monmouth, a cleric, whose ‘historical’ writings about the King Arthur legends were discredited by the 16th century. The name Tintagel comes from the Cornish Dintagel, meaning ‘fort of the constriction’.

Later in 1240, Richard led the second host of crusaders on the Barons' Crusade to the Holy Land. He didn’t fight any battles but in 1241 he negotiated the release of prisoners at Cairo, one of which was Amaury VI de Montfort bother of Simon de Montfort, VI Earl of Leicester. He negotiated the burials of crusaders killed at a battle in Gaza that took place two years earlier. He also oversaw the refortification of Ascalon which had been demolished by Saladin.

During his journey to the 1240 Crusade, Richard met Sanchia, who would be known as Cynthia to the English, in Provence. She was the sister of his sister-in-law Queen Eleanor. Richard was warmly welcomed Sanchia’s father Raymond Berenger IV. Richard quickly fell in love with the beautiful Sanchia.

Before the crusade, when Prince Edward was born in 1239, provisions were made in case of Henry III death. Richard was excluded from all arrangements Henry’s wife Eleanor and her Savoyard relatives being most favoured.

To placate Richard on his return from the crusade in 1242, King Henry and Queen Eleanor brought up the idea of a marriage with Eleanor’s sister Sanchia. Richard and Sanchia married at Westminster in November 1243. The union was instrumental in bringing about the Treaty of Paris and friendlier relations with France. The treaty eventually ended all Plantagenet claims to territories in France.

Children of Richard and Sanchia

Sanchia died 9 November 1261 at Berkhamsted Castle and was buried in Hailes Abbey.

Around 1225, Richard was appointed count of Poitou which has a coastline on the Bay of Biscay. The territory was disputed and his hold on it was tenuous at best. In 1241 King Louis IX of France invested his brother Alphonse with Poitou. Richard and Henry III mounted a military expedition to take Poitou but the operation was a complete disaster. Richard conceded Poitou around December 1243.

Richard's third wife was Beatrice of Falkenburg. They married on 16 June 1269 at Kaiserslautern in south-west Germany. Beatrice was about sixteen years old when she married. Her father was Dietrich I, Count of Falkenburg.

The couple were childless and Beatrice died 17 October 1277. She was buried at the Church of the Grey Friars in Oxford.

Left: 13th-century depiction of Beatrice of Falkenburg, Richard's widow, shown as Queen of the Romans.

In 1256, Richard was elected as King of Germany by four of the seven German Electoral Princes but his candidacy was opposed by Alfonso X of Castile who was elected by the other three. The pope and King Louis IX of France also favoured Alfonso, but both were ultimately influenced by the powerful relatives of Richard's sister-in-law, Eleanor of Provence.

On 27 May 1257 the archbishop of Cologne himself crowned Richard ‘King of the Romans’ in Aachen. Richard only made four visits to Germany between 1257 and 1269 so the title can be thought of as little more than honorary status. 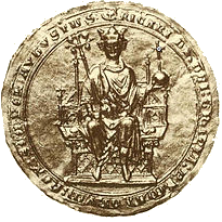 Seal of Richard, Earl of Cornwall, showing him enthroned as King of the Romans. Seal is inscribed: RICARDUS DEI GRATIA ROMANORUM REX SEMPER AUGUSTUS which translates to ‘Richard by the grace of God King of the Romans ever august’.

Richard had a mistress named Joan. She was married to Ralph de Valletort and later Sir Alexander Okeston of Modbury, Devon. With Richard, Joan de Valletort had three sons and two daughters.

During the Second Barons’ War of 1264-1267, Richard and his forces joined with his brother King Henry III in fighting against Simon de Montfort’s rebels. The war featured a series of massacres of Jews by Montfort’s supporters aimed at seizing and destroying evidence of Baronial debts.

The Battle of Lewes was one of two main battles of the war. It took place at Lewes in Sussex, on 14 May 1264 and was a crushing defeat for Henry and his forces. It marked the high point for Simon de Montfort as it made him the ‘uncrowned King of England’.

The consequences for Richard were serious as after the battle, he hid in a windmill but was discovered and imprisoned until September 1265. This was after the Battle of Evesham in August where Montfort was killed by forces loyal to the King. The war ended in 1267 with complete victory for the royalists.

In December 1271, Richard had a stroke. His right side was paralysed and he lost the ability to speak. On 2 April 1272, Richard died at Berkhamsted Castle in Hertfordshire. He was buried next to his second wife Sanchia and Henry of Almain, his son by his first wife, at Hailes Abbey, which he had founded. His Cornish title was passed on to Edmund, son of his second wife Sanchia, and he became 2nd Earl of Cornwall.

Richard founded Burnham Abbey in 1263 and the Grashaus (Grass house), Aachen in1266.

Burnham Abbey housed about twenty nuns at the outset but was never wealthy and was dissolved in 1539. The surviving buildings have been the home of an Anglican contemplative community since 1916.

The origin of the three lions or leopards is obscure but the earliest surviving representation of an escutcheon, or shield, displaying three lions is that on the Great Seal of the Plantagenet King Richard I which initially displayed one or two lions rampant, but in 1198 was permanently altered to depict three lions passant. 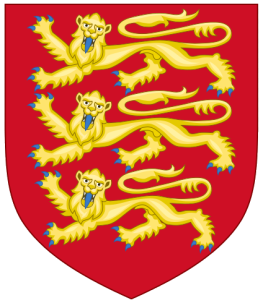 Three golden lions passant on a red field, representing the ruler of the Kingdom of England, Duchy of Normandy and the Duchy of Aquitaine.

To place Richard (1157-1199) in context he was known as Richard Cœur de Lion or Richard the Lionheart because of his reputation as a great military leader and warrior. He ruled England from 1189 until his death. He was succeeded by his brother John who in turn was succeeded by his son Henry III whose brother was Richard 1st Earl of Cornwall.

There's something familiar about that shield... 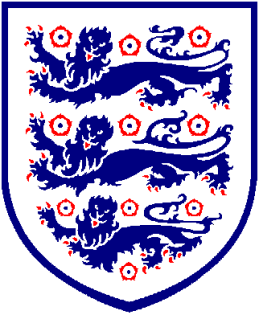 The Earl of Cornwall was built around the early 1980s so it’s a relatively modern pub. It lays back south of Cippenham Lane and east of Weekes Drive. It’s not my favourite pub; I prefer the nearby Long Barn, but it does have an extensive menu at very reasonable prices. There are two pool tables, two dart boards, wide screen TVs with BT Sports, Sky Sports and wi-fi connections. 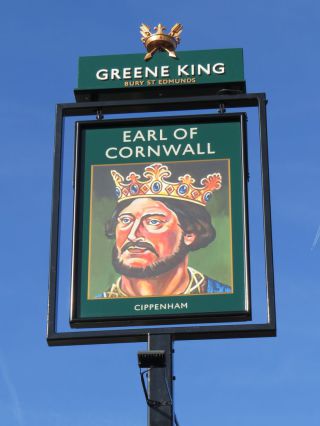 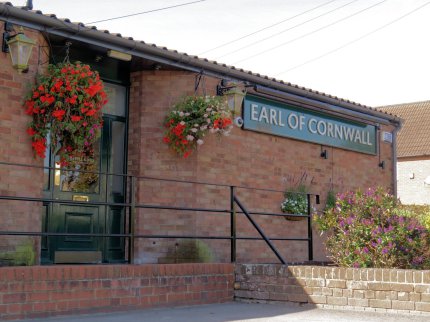