A resident of Upton Park was artist Henrietta Mary Ward. During Victorian times painting was an acceptable hobby for women but was frowned upon as a professional career. Henrietta Ward studied at Bloomsbury Art School and became the most prominent female artist of her day. She received commissions from Queen Victoria and gave art lessons to royal children.

In 1848, when she was 16, she married 32 year old artist Edward Matthew Ward who, despite having the same surname, was of no relation. In 1852 the Wards moved to Sussex Place in Slough and later spent six years at 11 Upton Park. The couple had eight children, one of whom was Leslie Ward, a caricaturist and much of his work was published in Vanity Fair. Henrietta outlived her husband by forty-five years. She published two autobiographies: Mrs EM Ward’s Reminiscences in 1911 and Memories of Ninety Years in 1924, the year of her death. She was buried in St Laurence’s Church along with her husband, father-in-law and son. 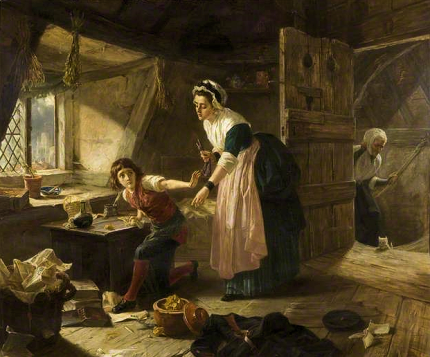 Henrietta Ward liked to paint scenes from how she imagined certain historical events. In this painting she imagined the poet and forger Thomas Chatterton (1752-1770) stopping his mother from picking up his parchment of his ‘medieval’ poetry. Chatterton suffered a not fully explained mental illness and died young of suicide.

It is a sympathetic portrait of the young poet. Ward’s skill is in understanding and use of light from two different sources to produce a piece of art that does not simply convey the episode but does it in a pleasing way. 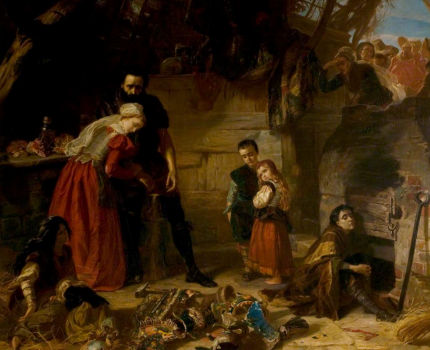 Palissy, the French potter of the 16th century, possessed by a desire to rival the fine Italian ware known as Maiolica. At the last gasp when success seemed certain, the flints composing the furnace had fused and, forming a flux with the pottery, ruined all his labours.

Some of Henrietta’s works include: 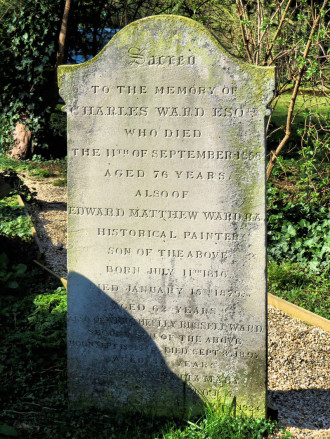 Henrietta Ward was buried in St Laurence’s church alongside her husband, father-in-law and son, her name is near to the ground and less distinct than the other names.