In 1966, Prime Minister Harold Wilson visited Slough as part of The Labour party’s General Election campaign. He went to Slough Technical School (now Slough Grammar) in Northampton Avenue to make a speech in the assembly hall.

The speech lasted about 45 minutes and at the end he was hit in the right eye by a stink bomb thrown by a schoolboy. As the glass shattered in his face, Mr Wilson put a hand to his right eye and exclaimed ‘What hit me? My eye hurts.’ 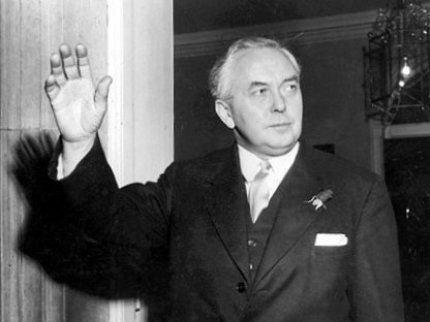 Wilson dashed off the platform with a handkerchief to his face and asked someone to call a doctor. He was initially treated by a first-aider and very soon after by Dr Arthur Smith. Some of the liquid had gotten into his right eye. It was inflamed and very sore.

The glass phial stink bomb gave off a strong smell of bad eggs.

Doctor Smith said that there had been some damage to the Prime Minister’s eye. There was an acid burn on the white of the premiers’ right eye and prescribed eye drops. Dr Smith said that the damage was not serious. He continued: ‘I have given him some tablets to ease the pain, but he will be alright.’

Mr Wilson did not return to the platform. He and his colleagues left for Downing Street. The Premier said ‘Something hit me in the eye and there was a shattering of glass. There was a smell. My eye is sore and smarting. But it will be alright in a couple of days. I’ll survive…’

Slough police said that two 15 year old boys were involved in the stink bomb incident. They were interviewed for more than an hour at Slough police station in the presence of their parents.

Of the one who threw the object Wilson said: ‘I have told the police I don’t want any charge preferred against the boy. Inspector Frank Wilson said: ‘No action is being taken, at the request of Mr Wilson. But the boys have been given a severe caution.’

Harold Wilson told reporters: ‘With an aim like that he ought to be in the England cricket team – and he should stick to the cricket ball.’

The General Election, which had been announced by he Prime Minister on 28 February, was held on 31 March. Labour won with a much increased majority. The majority was 96 seats in spite of this incident.

To the best of my knowledge, Harold Wilson had a routine to use his pipe when being asked an awkward question. Having been asked a question he would take out his pipe, and take great care cleaning it out thoroughly. Then he would fill it with tobacco with equal care. Minutes would pass by before he was ready to light it and take his first puff. Relaxed he would then say something like ‘’that’s a very interesting question and I will be looking into it.

By that time the person posing the question would have almost certainly forgotten the subject!