The Britwell Estate was established to re-house some 11,000 Londoners who had lost their homes in the Second World War. It was owned by London Country Council and at the time the local authority was Eton Rural District Council. London County Council later became part of the Greater London Council (GLC) and when that authority was abolished in 1986 the social housing was transferred to Slough Borough Council. The name Britwell derives from beorhtan wiellan, old English for ‘bright well’ or ‘clear well’.

A new development is the Britwell Centre which opened in Wentworth Avenue in April 2013. It includes Britwell Library with facilities for learning and volunteer work. There are computers available for public use and Wi-Fi access. The main hall can accommodate 150 people or can be split into one for 100 people and the other for 50. In addition there are two rooms for 18 people, two rooms for 10 people and an IT room for 14 people. The centre was officially opened on 5 April 2013 by HRH Queen Elizabeth II accompanied by Prince Philip the Duke of Edinburgh. 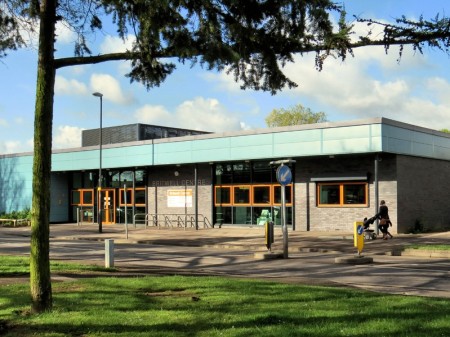 The Evergreen 2000 Trust is a voluntary community initiative. It was founded in September 1999 but has its history rooted in the 1960s when many of its members were involved in the conservation of Cocksherd Wood. The trust now manage a chain of seven conservation areas: Cocksherd Wood (4·85 Ha); Cocksherd Green, (1·66 Ha); Bangles Spinney (1·80 Ha); Bangles Green (0·30 Ha); Lynch Hill Valley (5·9 Ha); Lammas Meadow (3·35 Ha) and Haymill (9·17 Ha) giving a total area of 27·04 Ha. Lynch Hill Valley was formed by the Two Mile Brook which nowadays runs underground through Lammas Meadow until it surfaces in The Haymill. 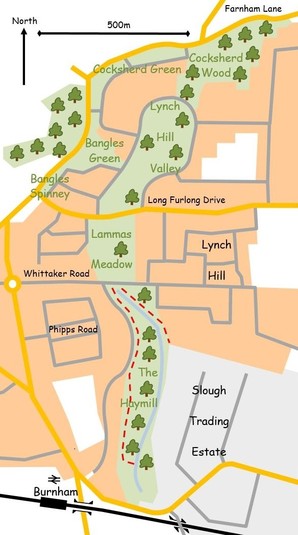 Cocksherd Green runs along the north-eastern edge of the Britwell and is ends in the east at a piece of ancient woodland known as Cocksherd Wood. The woodland covers an area of 11·98 acres and features a large hollow thought to have been gouged out by a glacier. It is locally known as Bluebell Wood. 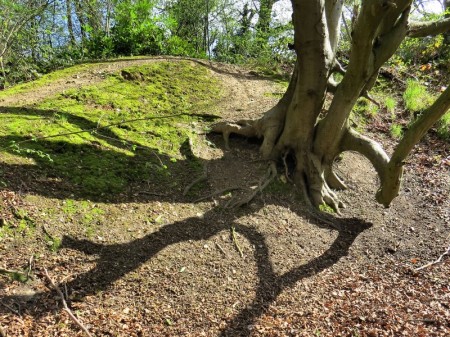 The wood is comprised mainly of deciduous trees such as ash, beech, hazel and oak and interesting birds found here include green woodpecker and bullfinch. Butterfly species include small skipper, small tortoiseshell and meadow brown. Stag beetles have also been reported here.

The whole area of nature reserves here are a genuine surprise and on one of my visits here I saw 3 red kites quartering the sky over Whittaker Road. The presence of birds of prey is usually a sign of a healthy natural environment.

Bluebells are bulbous perennials and the presence of them is often an indicator to ancient deciduous woodlands. They flower in spring, covering the ground with violet-blue flowers between the trees, before the leafy canopy cover of the trees closes in late spring. In western areas of their range they may occur in more open areas. In the UK it is a protected species under the Wildlife and Countryside Act 1981 and it is illegal to dig up bulbs or trade in wild bluebells. 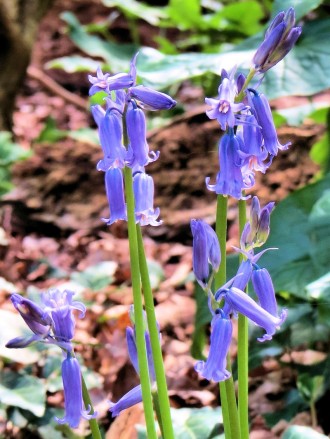 Bluebells occur in north-western Atlantic countries from north-western Spain to the British Isles but not as far north as northern Outer Hebrides, Orkney or Shetland. It also occurs east as far as the Netherlands, Germany and Italy. In addition it is an introduced species in north-eastern and north-western United States. The British Isles is estimated to be home to 25-30% of all common bluebells. 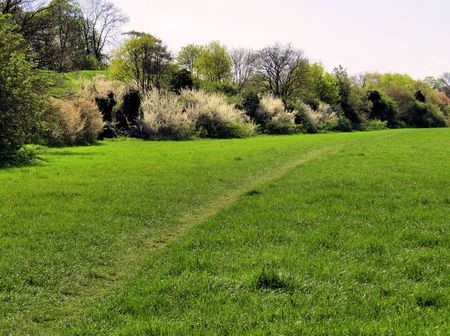 Lynch Hill Valley in the spring

In spite of its name, Burnham Railway Station lies within the Haymill Ward of Slough. It was opened as Burnham Beeches in 1899, renamed Burnham (Bucks) until 1975 when it was renamed Burnham. As an economy measure the station was closed during the First World War. Burnham Station handles around 1 million passenger arrivals and departures per year.

Alan Johnson, MP for Kingston upon Hull West and Hessle since 1997, worked as a postman in London in 1968 but moved to Britwell in 1969 to deliver post in the Burnham and Littleworth Common areas. While a postman, he joined the Union of Communication Workers and took an active role in union activities until 1987 when he became a full-time officer. He became General Secretary of the UCW in 1992.

His distinguished union career was followed by an equally distinguished political career which began in 1997 when he was elected MP for Kingston upon Hull West and Hessle. His maiden speech, made on 1st May 1997, was in support of a long campaign for trawlermen’s compensation which he led to eventual success.

Alan Johnson has appeared on the BBC television program Have I got News for You as host on one occasion and twice as a guest panelist. He has also written two books, This boy, A Memoir of a Childhood published in 2013 and Please, Mr Postman published in September 2014. To read Alan Johnson and his family’s experiences upon moving to Slough, please click on the button: