In the mid-1930s, RAF Fighter Command consisted of 13 squadrons equipped with obsolete biplanes such as the Bristol Bulldog, Hawker Demon and Hawker Fury. In 1935, the Air Ministry issued Specification F.36/34 for a new high speed monoplane single seat fighter.

Sydney Camm, chief designer at Hawker Aircraft, who was constantly working on new fighter designs, submitted the prototype of the Hurricane. It was powered by the new Rolls-Royce Merlin engine and designed to carry eight machine guns in the wings. 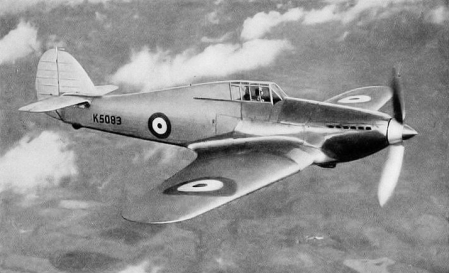 The prototype was originally referred to as the Merlin

In 1936, Hawker Aircraft Ltd bought Parlaunt Farm, Langley, to build an airfield and factory. It was completed by the end of 1938. The factory produced one Hurricane per day but production was up to five per day by 1942.

The Battle of France

In September 1939, The RAF had 18 squadrons of Hurricanes and the first of six squadrons were sent to France to help stem the German invasion. They were joined in May 1940 by four more squadrons but the German Blitzkrieg had gained momentum by now and all the Hurricanes were withdrawn to Britain by the middle of June.

Hurricanes were next involved in Operation Dynamo, the evacuation of British, French and Belgian troops from Dunkirk, and the Battle of Britain which is covered in another page. During the Blitz the Hurricane became the main night-fighter until more specialised aircraft were developed.

Hurricane I of the Finnish Air Force

This aircraft was one of twelve supplied to Finland in 1939 to help in their fight against the Soviet Union during the Winter War. Later the two countries would unite against the threat of invasion by Germany.

The Battle of the North Atlantic

When France fell, a major priority other than the Battle of Britain was the protection of convoys in the North Atlantic. These convoys were bringing desperately needed supplies from North America to Britain and the Soviet Union but, with little or no air cover, they were vulnerable to attack from U-Boats and long-range Focke-Wulf Fw200 bombers.

A stop-gap measure came in the form of Hurricanes launched from a catapult on a merchant ship to intercept the bombers. After the sortie the pilot would then make for nearest landfall or ditch in the sea hoping to be picked up by one of the ships. The aircraft were known as ‘Hurricats’ by the pilots. Later, true Sea Hurricanes were produced, fully equipped to be operated from newly-available escort carriers. 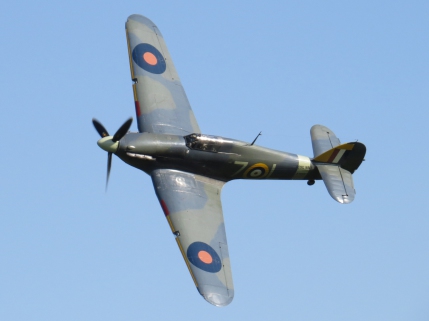 In the desert war in North Africa in 1942, Hurricane MkIIs fitted with four 20mm cannon and provision for two 250 lb bombs proved successful in the ground attack role against German and Italian armour In Europe, Hurricanes flew night-time intruder or ‘rhubarb’ missions flying low over France attacking targets of opportunity such as railway lines and military installations.

This aircraft  was flown by the Czech ace Flt Lt Karel ‘Kut’ Kuttelwascher DFC, RAF No 1(F) Squadron, Tangmere in 1942. He flew intruder operations and in 15 missions ‘Kut’ shot down 15 enemy bombers.

A handful of Hurricanes flown by valiant pilots and ground crews defended Malta from June 1940 until early 1942 when reinforcements finally arrived. 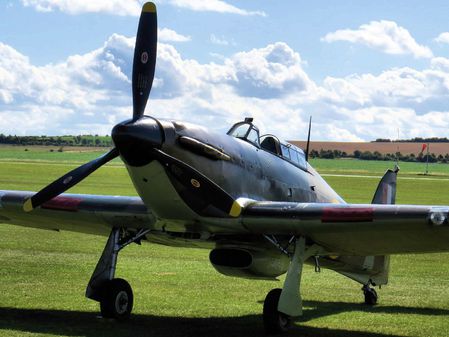 Built in Canada, this Hurricane I has the civil registration G-HURI and belongs to the Historic Aircraft Collection at Duxford. It carries the military registration of Z5140 and squadron code H-AC representing one of the defenders of Malta.

In September 1941, two RAF Hurricane squadrons, 81 and 134, were sent to Russia help in the defence of Murmansk. During this deployment the RAF pilots shot down 15 German aircraft for the loss of one Hurricane. Soon after, 2,952 Hurricanes were supplied to the Soviet Union under a Lend Lease agreement.

In 1942 Hurricanes were sent to Asia and fought throughout the war. The machines were becoming obsolete by now and there performance was further hampered by the fitting of tropical air filters under the nose.

A Hurricane IIC fitted with a tropical air filter and painted with Pacific theatre markings sent to the Far East in 1942.

14,451 Hurricanes were produced including 2,750 produced by the Gloster Aircraft company, 300 by the Austin Aero Company and 1,551 by the Canadian Car and Foundry, Ontario. Sea Hurricane numbers are a little bit sketchy because many were conversions from machines built as Hurricanes. The best number of custom-built Sea Hurricanes that the author can find is 885.

This aircraft was the last Hurricane ever built and wore the inscription ‘The Last of the Many’ below the cockpit as it left Hawkers at Langley.

Armament consisted of 4 x 20mm cannon and provision for 2 x 250 lb or 2 x 500 lb bombs. Only 13 Hurricanes worldwide are maintained in airworthy condition, 6 of which are based in the UK.

To learn more about the Poppy Appeal, buy products of remembrance or to make a donation that generate funds for the good work of The British Legion please visit:

Postcards from Slough would like to make it clear that any views expressed within this article are those of the website and do not necessarily reflect the views of The Royal British Legion, it’s members, The Poppy Appeal or any British service personel.