On a Friday, but I can’t remember which one, I received an E-mail from a guy called Chris who identified himself as a researcher for the Anne Diamond morning show on BBC Radio Berkshire. In his E-mail he asked me to call him by telephone to arrange a studio interview on Anne Diamond’s radio show.

I was quite pleased because Anne Diamond is a particular favourite of mine. She often appears on the mid-morning Channel 5 current affairs programme The Wright Stuff, sometimes as hostess. What I like about Anne is that when she starts to give an opinion, I may disagree with her initially, but when she finishes her point, I may still disagree but I find myself thinking in a very different way. 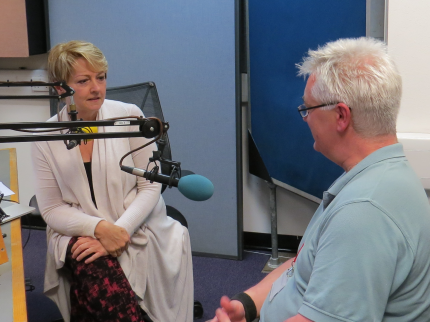 The researcher Chris told me that there would be three slots between songs for the interview with a wind up at the end of the half hour. He suggested that I concentrate on historic stuff. I took his advice but I was to come to regret this. I think Chris perceived Postcards from Slough as a history of Slough but it isn’t. It is a website about my hometown, the history is almost incidental. Looking back, I wish I had chosen the subjects myself. That way I could have been flexible instead of restricted. I could have emphasised the diversity of the website which reflects the diversity of Slough or I could have chatted about the race cars such as the Ford GT40 that came out of the town.

The day of the interview came. I set up Satnav and began my journey to the BBC Radio Berkshire studios which are based in a large non-secret house north of Caversham. In trying to avoid central Reading I took a countryside route which was a bad decision. There wasn’t much traffic but whatever car I was behind, the driver seemed reluctant to get to where he or she was going and drove at 20mph below the speed limit everywhere. Perhaps he had had a radio interview to get to.

On top of that, Satnav decided to be temperamental especially as we approached Reading. ‘We’ meaning me and Mavis, Mavis being my name for my Satnav. 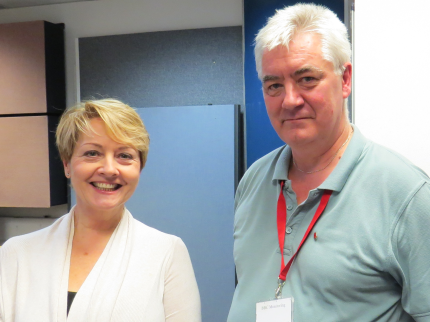 I arrived at the non-secret house and I parked my car in the rain-soaked car park which seemed to be miles away from the reception. I dashed through wet air to get to the studio reception just in time to be completely out of breath.

I was soon taken to meet Anne in her studio and settled for the interview which was conducted in breaks between songs. I used my crib sheet to help me talk on my three subjects.

The half hour went smoothly. Anne was charming as was her production team John and Michelle. During the last song there was just time for some photos and for Anne to ask about the ladybird pin badge that I was wearing, a story far mre interesting than the ones that I had gone to talk about. when the time was over we exchanged our thanks and goodbyes.

On my way home I tuned in to Anne’s show and they played a snippet of my interview. It took me a few moments to recognise my own voice and I hated it. When I got home I played the whole interview on BBC iPlayer and I felt some disappointment at my voice. I didn't sound at all interested.

I reflected on the event. It had been dull grey wet day. The journey had been awful there and back. I was breathless and damp as I went into the waiting room of the studio as I was now, and I couldn’t help thinking that I had chosen the wrong subjects. I also realised that my radio voice was terrible.

I tried to look for positives and went philosophical. All I could come up with was that perhaps it is better to have a poor radio voice than it is to have no radio voice at all.

Oh and I met Anne Diamond today. On balance, life is good. 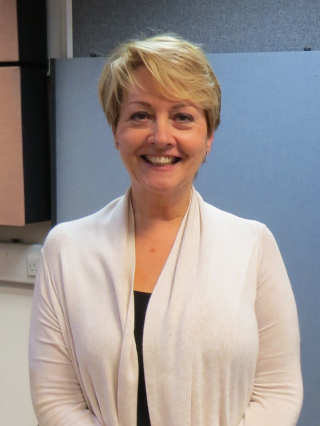