Sydney Camm’s design team at Langley began work on jet aircraft technology before the end on the Second World War. The result was obviously a big departure from Hawker’s previous designs which were a natural evolution from the inter-war biplanes such as the Hart and Fury all the way up to the Sea Fury.

Without an Air Ministry specification Hawkers began work on the P.1040 as a private venture. It was intended for the RAF as an intercept fighter but other fighters were already in service such as the Gloster Meteor and de Havilland Vampire with similar or better performance than that projected for the Hawker design. The Royal Navy did express an interest for thee aircraft as a fleet support fighter.

The prototype, VP401, was ground and stress tested at Langley but the airfield had no tarmac runway. With the proximity of the expanding nearby Heathrow, there was no chance of developing Langley so flight testing was carried out on other airfields. The prototype first flew on 2 September 1947 at Boscombe Down piloted by Hawker test pilot Bill Humble. The aircraft experienced some vibrations and buffeting which led to some redesign, most obviously the addition of a bullet fairing on the tail.

The first production Sea Hawk F1, WF143, flew on 14 November 1951 and was the first of 35 built by Hawker. The following 60 of the 105 ordered by the Royal Navy were built by Armstrong Whitworth (part of the Hawker group) as were all subsequent Sea Hawks. It was a clean elegant design but would soon be superseded by aircraft of higher performance. It did serve with distinction in a number of conflicts before retirement however.

Sea Hawks and the Suez Crisis

The Suez Canal links the eastern end of the Mediterranean to the Red Sea which ultimately leads to the Indian Ocean. It was opened in 1869 after ten years construction and is an important link between East and West both economically and politically as it provides a shortcut alternative to going around the Cape of Good Hope.

It was particularly important to Britain as it provided a link to India, Australia, New Zealand along with other British interests in the Far East. Under the Anglo-Egyptian Treaty of 1936 Britain held a lease to administer the Suez Canal for 20 years.

President Nasser of Egypt, who had led the overthrow of the Egyptian Royal Family in 1952 and had become a virtual dictator in 1956, nationalised the Suez Canal and the treaty with the British was not renewed. Britain formed a coalition with France and Israel who each had their own reasons to become involved in action against Egypt. 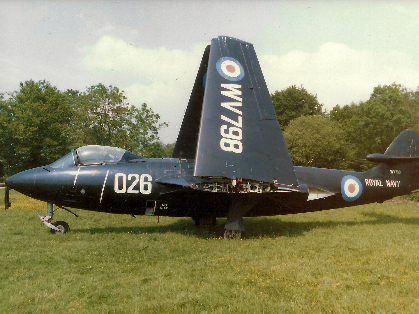 In 1981, WV798 was moved from static display at Thorpe Park to the Second World War Aircraft Preservation Society (SWWAPS) at Lasham as in the photo. By 2009 she had fallen into disrepair and was stored with Parkhouse Aviation at Booker until she joined the Classic Air Force, Newquay.

Initially dropping bombs and firing air to ground rockets at specific targets such as airfields and other military installations. In the early strikes, Sea Hawks of 804 and 897 Squadrons from HMS Bulwark were credited with destroying around 40 Egyptian Air Force aircraft and damaging a further 60 on the ground as well as the sinking of 4 Egyptian Motor Torpedo Boats (MTB).

After the Allied landings on 5 November. Sea Hawks flew ‘Cab-rank’ patrols where they could react quickly to calls from ground troops to give close air support and attack specific targets. The effectiveness of this tactic was proved in a particular action on 6 November at Port Said. 40 Commando were pinned down by fire from the Egyptian Navy HQ. Sea Hawks from the Cab-rank were called in and they destroyed the building with the loss of one aircraft to ground fire. The pilot survived. Later that day another Sea Hawk was lost along with the pilot. Three other Sea Hawks were damaged during Operation Musketeer but they each returned safely to their ships.

Diplomatic pressure from the US forced Britain and France to agree to a ceasefire in the early hours of 7 November. Sea Hawks remained in service with the Royal Navy until late 1960. They were replaced by the Supermarine Scimitar. 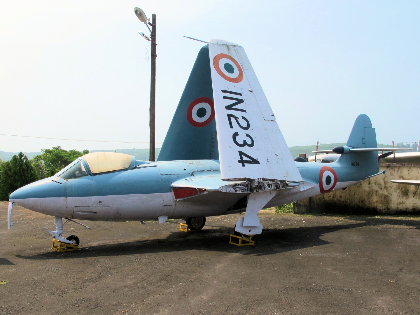 Sea Hawks of the Indian Navy saw action in the first Indo-Pakistan War of 1965. In 1971 tensions between the countries flared up again. On 4 December 1971 eight Sea Hawks of 300 Squadron from INS Vikrant stationed in the Bay of Bengal attacked the airfield and harbour at Chittagong with bombs and rockets.

The following day Sea Hawks attacked Cox’s Bazaar, Chittagong Harbour and ships in the area. The ports of Khulna, Chalna, Mangla and Chittagong were attacked on 6 December along with airfields at Dohazari, Hahlahazari and Chittagong. This action was continued until 16 December when Pakistani forces in the east surrendered. In those few days the Sea Hawks of 300 Squadron flew over 200 sorties and only one aircraft was badly damaged by ground fire but it managed to return safely to the Vikrant safely.

A total of 542 Sea Hawks were built. As well as the Fleet Air Arm, Sea Hawks were operated by the navies of Germany, India and the Netherlands. Nearly 40 Sea Hawk airframes exist and one, serial number WV908, is maintained in flying condition for the Royal Navy Historic Flight.