By the early 18th century what was once a basic wagon track for the Romans had become a series of individually-run turnpikes or toll roads that roughly followed today’s Bath Road. Mileposts were compulsory from 1767 on all turnpikes to help coaches keep to schedule, for charging fees for changing of horses at the coaching inns and to calculate postal charges. By the late 19th century control and responsibility of the road was taken over by the local county councils. 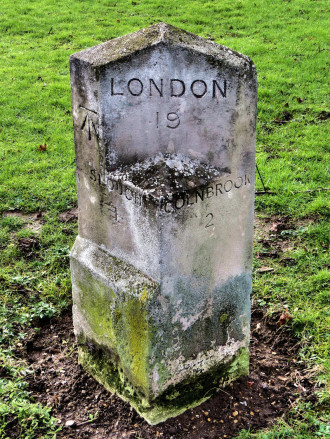 In the 1750s the journey time was 2 days but in the 1830s journey times for Royal Mail coaches was a little over 12 hours. It is at this time that public transport by stagecoach had reached its peak with ten services along the Bath Road each day. The coaching era was short-lived however, with the building of the Great Western Railway. The early 1840s saw the last coach service on this route.

The Slough Arm is a short canal branch linking Slough to the Grand Union Canal. It was built to transport bricks made from clay deposits in the area of Stoke Road in Slough. Incidentally, bricks from these brickfields were used to build nearby Eton College. The canal took two years to build and was opened late 1882. The Slough Arm is some 5 miles long and does not have any locks. 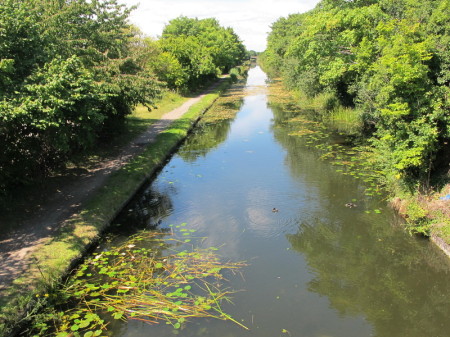 The peak of commercial cargo traffic on the canal was in 1905 when some 192,000 tons of bricks, sand and gravel was carried by the waterway. By the 1940s however, the deposits of clay and gravel were becoming exhausted. There was some timber cargo but the last commercial traffic was in 1960.

Slough Borough Council proposed filling part of the canal in but thankfully, the Slough Canal Group, formed in 1968, fought a successful campaign with the support of the Slough Observer newspaper and the canal was re-opened in 1975.

The first section of the Great Western Railway (GWR), ran between Paddington and the original Maidenhead station built on the east side of the River Thames opened 4 June 1838 but there was no station at Slough.

In 1835 the Act of Parliament that enabled the Great Western Railway (GWR) to be built prevented the construction of a station within 3 miles of Eton College without the permission of the Provost and Fellows of the school. It seems that they were concerned that Eton boys would find the station to be too convenient to travel to London and be exposed to whatever corruptions that might be found in the capital.

Typically with rules that haven’t been thought through, the act didn’t prevent trains stopping at Slough so tickets were sold at the nearby Crown Inn and passenger boarded or alighted at the trackside. Common sense prevailed and the relevant clauses of the GWR Act were repealed allowing the station at Slough which was opened on 1 June 1840. There is no definitive record of whether any Eton boys have either been led astray or not due to the presence of Slough Station. 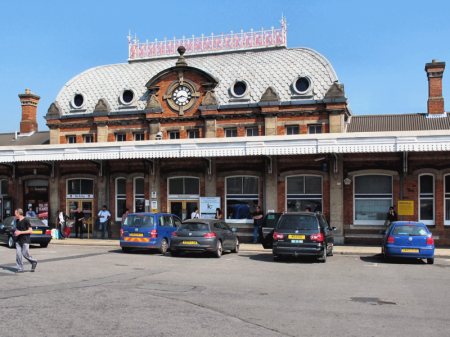 The original station at Slough was designed by Isambard Kingdom Brunel, the engineer responsible for the surveying and design of the whole of the GWR, and was constructed of timber. Slough became the Royal Station soon after when Queen Victoria made her first railway journey from Slough to Bishop’s Bridge near Paddington in 1842. Slough lost its Royal status in 1849 when the branch line to Windsor was completed to serve Windsor and Eton Central Station.

The unique and ornate present station buildings were designed by John Danks and was opened in 1884. The buildings represent the fifth station to be constructed here. The station has survived mostly intact except for some waiting room buildings on the island platform which were demolished in the 1970s before the station was Grade II listed. Local trains from Paddington stop at Slough and some express trains also stop here on the way to and from the West Country, the South West of England and South Wales. Slough Station handles around 5·5 million passengers per year. 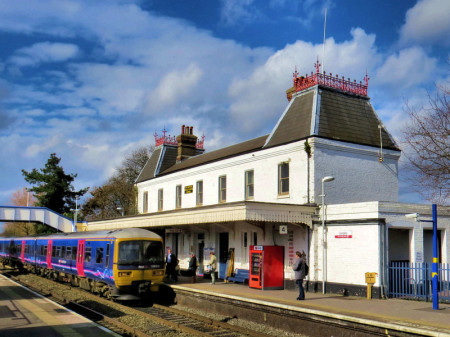 The original railway station at Langley was built in 1845. The present station was designed by John Danks who also designed Slough (1884), Taplow (1872) and Tilehurst (1882) stations. Langley handles around 0·7 million passenger arrivals and departures per year.

In 2006, First Great Western was declared the worst train operator in the UK with 25% of train services running late. This was a breach in the franchise contract.

In January 2007 a group of activists issued fake tickets to passengers on the Bath to Bristol section. The tickets were fine imitations of real tickets but had the words ‘Fare Strike’ printed on them along with phrases such as ‘Ticket type: Standing room only’ and ‘Class: Cattle truck’. The Company threatened passengers who participated with fines of up to £5,000 but their staff didn’t challenge the fake tickets.

Another fare strike took place in January 2008 because passengers weren’t satisfied that enough improvements had been made. Later that year the Department of Transport issued a Remedial Notice Plan; potentially the first step to an operator losing its franchise. 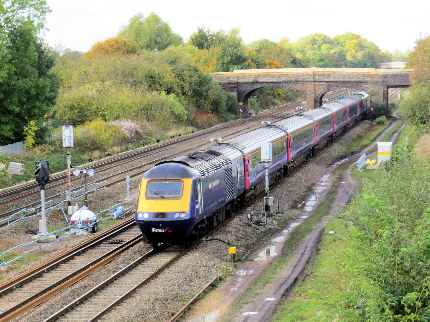 Many changes were made including longer trains on certain routes, cheaper off-peak tickets, refurbishment of some of the older trains and improvements to passenger information on station platforms.

These actions worked and by June 2009, First Great Western was transformed to become one of the rail network's most punctual operators with nearly 95% of trains arriving on time, and in February 2010 FGW was named Train Operator of the Year. 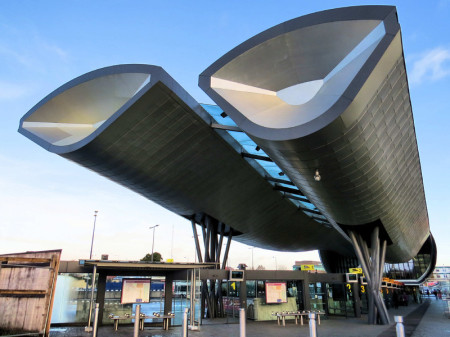 Slough’s old bus station was a draughty and dark depot with a multi-storey car park on top. In 2011, as part of the Heart of Slough redevelopment, it was replaced with a new modern design allowing natural light. The design was inspired by Sir William Herschel’s research into light waves and in particular his discovery of infra-red light. 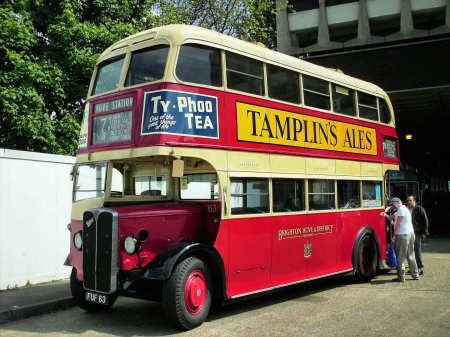 A double-decker bus belonging to the Amersham and District Motorbus Society at the old Brunel Bus Station on a ‘running day’ in 2009. 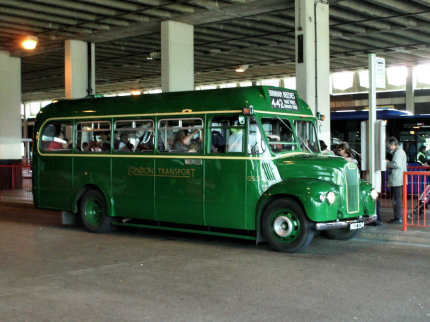 A single-deck bus also belonging to the Amersham and District Motorbus Society at the old Brunel Bus Station on  the same ‘running day’ in 2009.

The first two stages of the M4 Motorway, London to Maidenhead and Bath to Newport including the Severn Bridge, were begun in 1965 and opened in 1966. The English section was completed in 1971 and the Welsh section in 1993. The Second Severn Crossing opened in 1996 and the original Severn Bridge is now part of the M48. According to Department of Transport Statistics, in 2010 the average daily flow of all motor vehicles for the section that runs through Slough was over 126,000. 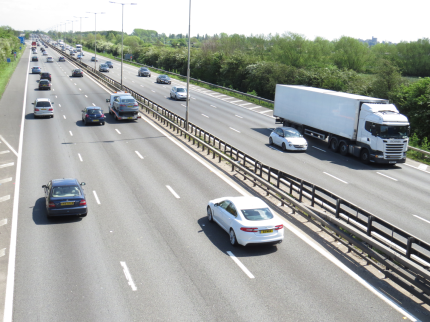 M4 Motorway looking east from Wood Lane Bridge in Cippenham. Windsor Castle can just be made out in the distance in the top right-hand corner. 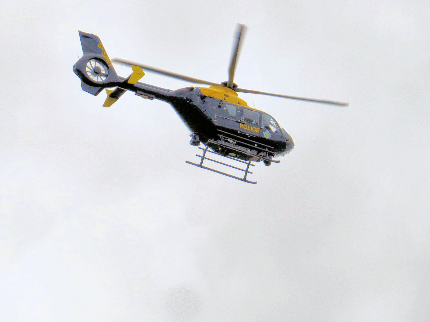 Police Eurocopter EC135 G-SURY on patrol over the M4