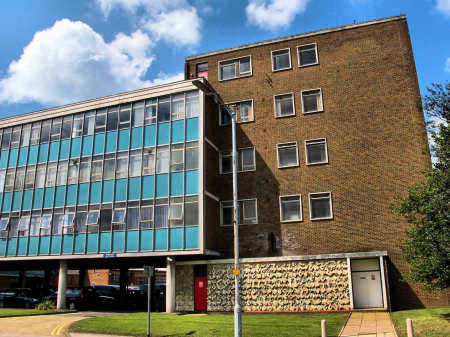 On 9th July 2001, the first episode of the TV program The Office was broadcast on BBC Two. It was created, written, and directed by Ricky Gervais and Stephen Merchant and initially the ratings were poor and it was nearly cancelled. I believe that the low ratings were because it was so well scripted and so well acted that people thought that they were watching a real documentary about a real office. Once the audience caught on that it was a mockumentary, however, the show took off and went on to become one of the BBC’s biggest ever exports.

The program was set in Slough and the opening credits featured various landmarks from around the town. The locations were carefully selected and filmed on overcast days to produce a dreary effect to reflect the dreariness of the office and the staff who worked there. This effect was enhanced by the use of the theme song Handbags and Gladrags as performed by Big George.

The locations featured in the opening titles included the Brunel Bus Station and the Brunel Bridge Roundabout each of which have since been redeveloped. Also in the sequence is Crossbow House which was used to represent the offices of the fictional paper merchants Wernham Hogg. Crossbow House was demolished in early 2014. In fact I believe the only landmark left standing from the opening sequence is the sign pointing to Slough Trading Estate.

The show was a spoof fly-on-the-wall documentary of the day to day activities in the office of a fictional paper supplies company Wernham Hogg. The main character David Brent, is the manager and who deludes himself as running a successful operation. He also wrongly believes that he is popular with his staff. He strives hard to maintain this delusion but all his efforts to impress his colleagues always ultimately end in disaster.

There are sub-plots with the other characters of course, the main one being the romance between Tim, an office-based sales rep, and Dawn the receptionist. Another source of amusement is the seriousness of sales rep team leader Gareth Keenan and his obsession with his work in the Territorial Army.

The main characters and actors

Chris Finch, an on the road salesman – Ralph Ineson

The Office won a Golden Globe Award in 2003. The series has been sold to something like 80 countries and has spawned foreign versions. In America the lead character was played by Steve Carrell and the series retained the title The Office. A French version was made called Le Bureau, Israel made HaMisrad and there was the French Canadian – La Job.

The show also made major international stars out of the actors who played the main characters.

Ricky Gervais was born in Reading on 25th June 1961. He is now a major TV and film star. Apart from his writing, directing and producing activities he has been the lead character in the TV shows of his own creations or co-creations with Stephen Merchant: Extras, An Idiot Abroad, Derek and the cartoon series The Ricky Gervais Show.

His film appearances include the Night at the Museum series (2006, 2009 & 2014), the animated movie Valiant (2005), Ghost Town (2008), and The Invention of Lying (2009) and Cemetery Junction (2010) both of which he wrote, directed and produced. Among his accolades he has won three Golden Globe Awards, two Emmys, seven BAFTAs and five British Comedy Awards.

Martin Freeman’s career has also taken off since The Office. Among many roles in his career he played Dr Watson in the three series of Sherlock shown on BBC1 (2010, 2012 and 2014). A fourth series is scheduled to be shown late 2015. He has also played Bilbo Baggins in The Hobbit film trilogy, Arthur Dent in The Hitchhiker’s Guide to the Galaxy (2005) and Paul Maddens in Nativity! (2009). He has also had starring roles in Love Actually (2003), The World’s End (2013) and the TV series Fargo (2014). Freeman’s honours include an Emmy, a BAFTA and an Empire Award.

Mackenzie Crook. The most famous role that Mackenzie Crook went onto is probably that of Ragetti in the Pirates of the Caribbean series of movies. He played the lead role in Three and Out (2008) and wrote, directed and starred in the highly acclaimed BBC TV series Detectorists (2014).

To some people The Office was an insult to Slough but when I first saw it I thought it was the funniest thing I’d ever seen. I bought the complete box set. I like to think that once again, Slough has been partially responsible, even in a tiny and very distant way, for yet another worldwide phenomenon.