These pages are about some of the flora and fauna to be found in my garden. When my wife and I moved into our house it was new and the back garden was just a rough lawn laid by rough developers. We soon designed and built the garden giving it a split-level lawn, a pond and rock garden and some borders in which to plant wildlife-friendly plants.

The garden covers an area of just 90 square metres but in nearly thirty years of living here, I have observed 48 species of birds, 9 species of butterflies, 30 species of other invertebrates, 5 species of wild mammal and at least two species of bat. It wasn’t an intensive scientific study, it was just casual observation by an amateur taken over time. The contents of these pages may vary from time to time. 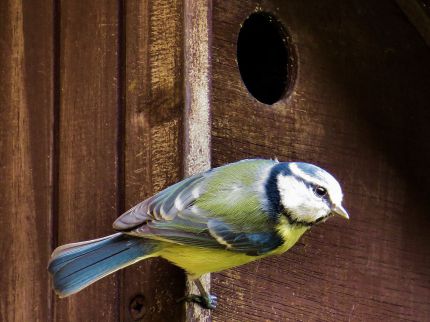 A blue tit checking out a nest box

I have added several features to attract and support wildlife in my garden. I built a wooden archway and planted a honeysuckle at the base of each leg. The honeysuckle attracts butterflies and other insects.

I fitted two nest boxes to the rear of the garage, both of which have been used by blue tits and great tits. I also fitted two bat roosting boxes but I am not sure that they have been so successful. 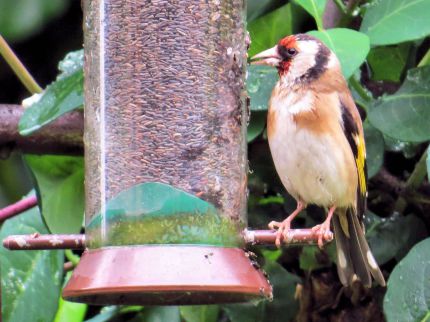 A goldfinch on a nyjer seed feeder

There is ivy on the back fence which is now very mature. I planted it to provide cover for all sorts of creatures and amongst it is a robin nest box which has also been used successfully.

There is a bird table and a bird bath both of which are fitted to poles in the lawn. I throw scraps out onto the lawn for birds that don’t visit the bird table. Passion flower plants grow on a trellis fitted to the back wall of the house and this attract butterflies and other insects.

My wife, father and I built a rock garden with a pond and stream. This attracts insects and therefore insectivores like grey wagtails.

I wanted to use coconut halves as bird feeders. The first thing is to empty the coconut of the milk. Drill a hole on side of the coconut then place it on a mixing jug with the hole down and drill a hole in the top to allow air in. This milk can be frozen to be used in cooking at a later time. 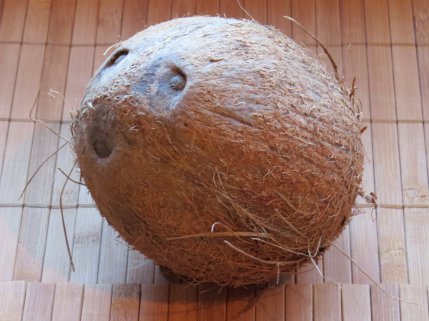 The husk needs to be halved and I had heard that striking it on one of the eyes with a sharp machete or kukri would achieve this. I don’t own a machete or a kukri so I tried a meat cleaver but to little effect. I did manage to start a split at one of the eyes but the husk was so tough that it didn't split completely.

Finally I lost patience and smashed on my patio on the point where I had started the split. It broke into two pieces; a one-third and a two-third piece. 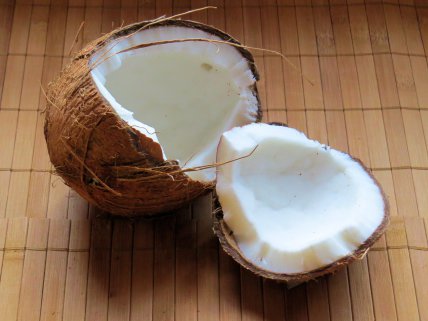 Using a hole that I had drilled in the husk, I hung the large piece from my archway for small birds such as blue tits, great tits etc . I fixed the other piece on another part of the arch for other birds, hopefully the ring-necked parakeet that has been visiting my garden lately.

First visitor was a squirrel who had a few sniffs and a cursory nibbles but generally turned his or her nose up at it. He got a taste for it and knocked it to the ground a couple of times so I removed it to place it closer to the patio.

A ring-necked parakeet is an exotic and welcome visitor