In 1942, even before the first Tempest rolled off the production line, Sydney Camm’s design team at Langley began work on its replacement. At the same time the Royal Navy issued a requirement for a similar aircraft for carrier-borne operations.

The new aircraft for the RAF was to be named the Fury and it represented a natural evolution from the Typhoon and Tempest. The Fleet Air Arm version was to be known as the Sea Fury. The first Fury prototype NX798 flew on 1 September 1944 with the second, LA610, on 27 November that year.

The new aircraft for the RAF was to be named the Fury and it represented a natural evolution from the Typhoon and Tempest. The Fleet Air Arm version was to be known as the Sea Fury. The first Fury prototype NX798 flew on 1 September 1944 with the second, LA610, on 27 November that year.

As the war drew to a close the RAF began to cancel orders for several aircraft types and they had a surplus of Tempests and late version Spitfires. The Fury would have been an unnecessary addition.

The Royal Navy however, had many aircraft under Lend-Lease from the United States and rather than buy them outright they preferred the idea of replacing them with this new British aircraft, so the Sea Fury programme was continued. 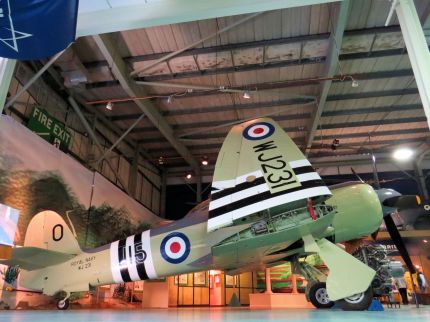 The Fury prototypes continued to be used in the development of the Sea Fury. The first prototype of the naval version, SR661, had an arrester hook but non-folding wings. First flight took place at Langley on 21 February 1945, powered by a Centaurus XII engine. Deck landing trials with this aircraft took place on HMS Ocean in October 1945.

The second prototype, SR666, which first flew on 12 October 1945 did feature folding wings and was powered by a Centaurus XV which drove a five-bladed propeller. The Sea Fury’s fully monocoque design, wide undercarriage and the raised cockpit position giving the pilot a better all-round view made the aircraft a superb carrier-borne fighter-bomber.

The Sea Fury went into production with an order of 200 for the Royal Navy initially built by Boulton-Paul. This order was cut to 100 and subsequent manufacture was carried out at Hawker’s Kingston facility. 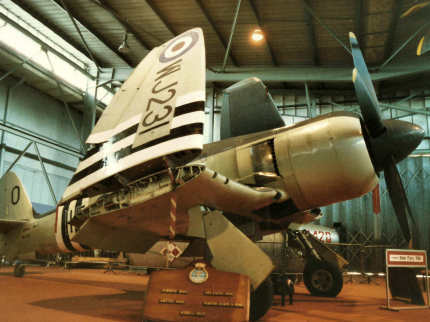 The Korean War began on 25 June 1950–27 July 1953 when communist forces from the north invaded South Korea. Forces from several countries were sent to the war zone under the command of the United Nations. Amongst the ships that the Royal Navy sent was the aircraft carriers HMS Glory and HMS Ocean. The Royal Australian Navy (RAN) sent the carrier HMAS Sydney. All three carriers had Sea Fury Squadrons: RN 804 (Glory) and 802 (Ocean); and RAN 805 and 850 (Sydney).

On the morning of 9 August 1952 some 15 miles northwest of Chinnampo in what is now North Korea, four Sea Furies of 802 Squadron from HMS Ocean encountered eight MiG 15 jet fighters.

For some reason the MiGs threw away their advantage by slowing down and descending. Lt Peter Carmichael commanding the flight dived on one of the MiGs, closing in to about 300yds firing his 20mm cannon. The shells exploded in the aircraft which went crashing to the ground.

In the ensuing confusion of firing passes, many head-on, Lt Davis and Lt Ellis managed to damage another two MiGs. Two of the Sea Furies suffered minimal damage. The action lasted about four minutes.

MiG-15 of the North Korean Air Force. Many of these aircraft were flown by Russian pilots.

The following day there was a similar incident but this time a MiG got in behind Carmichael but Davis managed to make him break off. Seconds later Davis found himself in a head-on attack. The MiG broke away first. The dogfight lasted about 10 minutes and one of the MiGs was seen heading north trailing black smoke. Incidentally, Lieutenant Peter ‘Toby’ Davis (later Lieutenant-Commander Davis) flew more sorties than any other UN pilot in the Korean War.

Sea Fury FB11 WJ232/114 of 802 Squadron of HMS Ocean during the Korean War. This aircraft was flown by Lieutenant Peter Carmichael who shot down a MiG-15.

Armament consisted of four 20mm cannon and either twelve air to ground rockets or 2,000 lb of bombs. A total of 864 Sea Furies were produced. As well as the RN, Tempests were operated by the Royal Australian Navy, the Royal Canadian Navy and the Pakistan Air Force.

In 1972, The Royal Navy Historic Flight (RNHF) was established at RNAS Yeovilton.. In 1995, the ground staff service personnel were replaced by civilian employees but aircrew remain as serving navy pilots who volunteer to spend free time with the RNHF. Air training uses the Flight's DHC Chipmunk.

Over the years, the RNHF has received aircraft of various types from British Aerospace, the German government and the Royal Navy.they also accepted technical assistance with the rebuilds and refurbishments of the aircraft. Three aircraft have been lost in accidents, sadly with two fatalities.

Sea Fury FB11 VR930/110 flies with the Royal Nay Historic Flight in the colours and markings of her original 802 NAS code of '110/Q' when she was first based at RNAS Eglinton, Northern Ireland, and then embarked in HMS Vengeance in 1948.

Sea Fury T20 VX281/VL advanced trainer in the markings of a 799 NAS/50th Traing Air Group based at Yeovilton 1949. It suffered an emergency landing at RNAS Culdrose Air Day 2014. The airframe has been repaired and it is hoped that it will be ready to fly with the Royal Navy Historic Flight for the 2017 display. 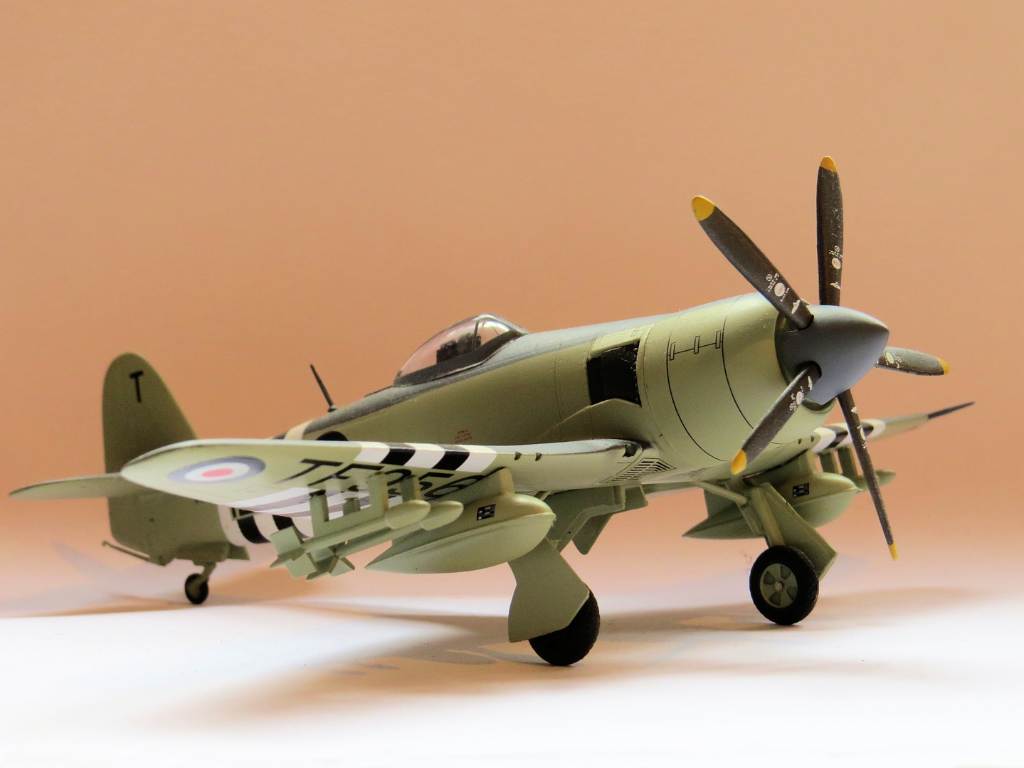 A Corgi die cast model of Sea Fury FB 11 TF956 of the Royal Navy Historic Flight. The aircraft represented here was lost in the Firth of Clyde near Prestwick, 10 June 1989