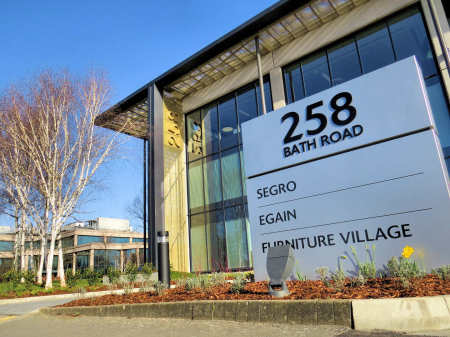 SEGRO office on the Bath Road

The Industrialisation of Slough

Before the 1920s, Slough was a sleepy market town in Buckinghamshire of around 15,000 people. In 1920 the area which was to become Slough Trading Estate was used to store more than 17,000 military trucks, cars and motorcycles that were surplus from the First World War.

Sir Percival Perry, former head of Ford’s UK operation, and Noel Mobbs, a Fiat franchisee, negotiated a deal with the government which included the 600 acre Bath Road site, all its covered workshops and the vehicles. The deal also included vehicles still abroad and those which would become surplus to the government over the next two years. 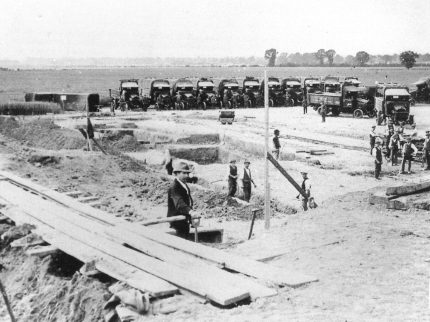 Slough Trading Company was formed In April 1920 and some 8,000 people, about half the town’s population at the time, were employed in the repair and sale of the vehicles. Over 30 buildings along with roads, railway tracks with a passenger station, a power station and gas producing plant were built.

As the stock ran down, the company adapted the use of the site to leasing parts of the estate to other commercial enterprises. The company became Slough Estates Ltd and was the world’s first trading estate. It is now the largest in Europe in single ownership and is a major international company.

The Peerless name has an odd lineage. In 1911, the Peerless Lorry Company of Cleveland, Ohio began building a range of trucks. They fitted truck and van bodies on car chassis and made larger chassis for trucks up to 5 tons. The US Army bought many Peerless trucks and the UK bought about 12,000 for use in the First World War. In 1919, the US manufacturer that had become known as the Peerless Truck and Motor Company, stopped building vehicles. 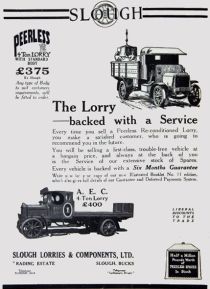 After the war, thousands of trucks of various makes including Peerless and, as this advertisement from 1922 shows, AEC, were returned to the UK and dumped on the north side of the Bath Road to the west of Slough. This is when the Slough Trading Company was founded to refurbish these trucks for sale to the civilian market after the First World War. Many of the trucks were in a very poor state and needed completely new components to be specially manufactured.

An impression of a typical Peerless truck from several very fuzzy old photographs and other images.

Later the Peerless name was used for an automotive parts supplier also based on the Trading Estate and, after the Second World War, the name was applied to the Peerless GT car company which was based on a site since absorbed by Mars Ltd.

Advertisement for Peerless Parts from 1930

The truck refurbishment enterprise had naturally laid the foundations for the fledgling trading estate which was being transformed even before the supply of vehicles had run out. By 1926, Johnson & Johnson, Citroën, Gillette Razor Company, Black & Decker were among many companies that had opened factories and warehouses on the Estate. Mars confectionery was established in 1932.

In the 1950s, there was a change in emphasis from heavy to lighter industry and by 1959, 600 factories were occupied by 240 companies. Today something like 17,000 people are employed by 400 companies on the Estate. Companies include Ferrari Maserati, LG Electronics, Stanley Black & Decker and Telefonica O2. 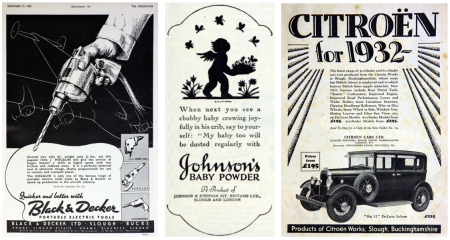 Some adverts from the inter-war period

Slough Trading Estate is 474 acres, equal to over 300 football pitches, and is owned by SEGRO plc (from Slough Estates GROup). Considering its size it’s one of the tidiest and cleanest industrial areas in the country. The company as a whole is thriving and boasts an extraordinary list of customers of around 1,700 including many major global companies. The company has continued expansion in Britain and is Europe’s leading provider of Flexible Business Space, owning properties in Belgium, the Czech Republic, France, Germany, Hungary, Italy, The Netherlands, Poland and Spain. It also has property in the United States and Canada.

There has been a power station on the Slough Trading Estate site supplying electricity, hot water and steam to the trading estate, local businesses and some residential customers in Slough since the 1920s. The power station operated on coal and gas until 2000 but was converted to renewable and sustainable fuel in 2001/02. It was acquired from SEGRO by Scottish and Southern Energy in January 2008. 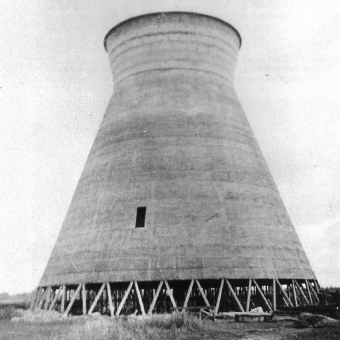 An early cooling tower built in the 1920s

The power station is the largest energy facility in the UK that is dedicated to bio-energy, burning around 300,000 tonnes of non-recyclable material per year that would otherwise have gone into landfill.

Wood fuel is supplied by Thames Valley Bioenergy and comes in the form of woodchips from local authorities, foresters, short rotation coppice growers and other sources. Non-recyclable materials such as laminates and packaging are supplied in the form of reconstituted fuel cubes made next to the site. The power station provides electricity, heat and drinking water to some 400 industrial and commercial premises on Slough Trading Estate and electricity to about 2,500 nearby domestic premises. 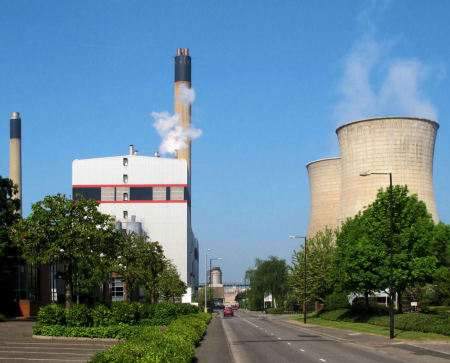 A passenger service ran from Paddington and Slough stations to a station on the trading estate accessed by a spur from the main line until 1956. The estate also had a railway directly linking the factories to the Great Western Railway until its closure in 1973. Five 0-6-0ST (Saddle Tank) engines were used to shunt the rolling stock and two of these locomotives still exist in museums. 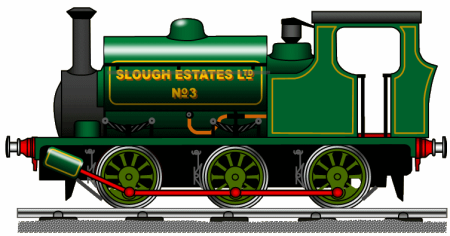 Built by Hudswell-Clarke, No 3 (works no 1544) was delivered to Slough Trading Co Ltd in 1924. It is now owned by the Slough & Windsor Railway Society and is currently on loan to the Middleton Railway in Leeds. No 5 (works no 1709) was built in 1939 and is at Embsay and Bolton Abbey Railway Museum still in working condition.