During the development of the Typhoon, Sydney Camm’s design team at Langley were already planning its replacement initially known as Typhoon II. The new aircraft incorporated low drag laminar flow wing developed by NACA in the United States. This resulted in thinner elliptical wings resembling those of the Spitfire. The thinner wings meant that room had to be found in the fuselage for fuel tanks.

The Air Ministry asked for six prototypes with different engines to cover the possibility of delay in the supply of any particular type. A summary of five different prototype marks with the engine types and body configurations is given here.

Mark I prototype HM599 had a Napier Sabre IV engine with no nose radiator and a Typhoon-style tail. The cockpit was of ‘car door’ type. First flew 24 February 1943. With its clean nose, the top speed of this mark was 466mph (750kmph) making it the fastest Hawker aircraft to that time. The Sabre IV engine was unreliable however, and only one aircraft was built.

Mark II prototype LA602 had a Bristol Centaurus IV radial engine and a Typhoon-style tail. The cockpit was a sliding type. Hawker revisited this design and produced it for service in the Far East after the Second World War when Bristol Centaurus IV engines were more readily. The war in Europe and against Japan ended before the Tempest II went into service.

Mark III prototype LA610 had a Rolls-Royce Griffon IIB engine and a Typhoon-style tail. The cockpit was a sliding type.

Mark IV was a cancelled project.

Mark V prototype HM595 had a Napier Sabre II engine with a scoop radiator and a Typhoon-style tail. The cockpit was of ‘car door’ type. It first flew on 2 September 1942. This was the chosen type to be further developed with a revised tail and sliding cockpit. The aircraft soon became known as the Tempest and the mark V went into production with the first off the line on 21 June 1943.

Because of its low-altitude speed, the Tempest was the preferred allied fighter to use to intercept the missiles and 150 Wing were assigned the task. Other aircraft types were later developed but the Tempest destroyed the greatest number; 638 out of a total of 1,846 claimed by RAF pilots.

Dealing with V-1s was a difficult and dangerous task because if the aircraft’s cannon caused the warhead of the V-1 to blow up, the chasing aircraft could be caught up in the explosion and itself destroyed. A safer way to dispose of them was for the pilot to manoeuvre his aircraft so that one of his wing tips came within 6 inches of the underside of a wing of the missile. The airflow from the fighter would disrupt the airflow under the missile and it would flip over to crash short of its target into the sea or less populated countryside.

Another solution was pioneered by Wing Commander Roland Beamont. He had the cannon on his aircraft realigned so that the shells would converge at three hundred yards. This meant the missiles could be shot down at a greater and safer distance. 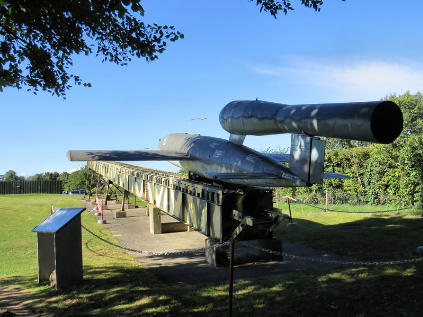 A replica V-1 ‘Doodlebug’ and launch ramp at Duxford

By September 1944 the V-1 threat had receded and Tempests based in South-western England flew armed reconnaissance sorties in support of Operation Market Garden, the airborne attempt to seize a bridgehead across the Rhine.

Tempest in air to air combat

Tempests from 135 Wing were used against the new German jet fighter the Messerschmitt Me262 using a tactic known as ‘Rat Scramble’. When a Me262 was reported to be in the air Tempests on alert would take off but instead of trying to engage the fast jet, they would fly to their base at Rheine-Hopsten to attack them as they tried to land when they were at their most vulnerable.

Tempest units achieved an estimated success ratio of 6:1 ratio against single-seat enemy fighters. Top gun was Squadron Leader David C ‘Foobs’ Fairbanks. He was an American who joined the RCAF in 1941 and scored 11 or 12 kills by 1945 when he was shot down and made a POW.

Armament consisted of four 20mm cannon and either eight air to ground rockets or two 500 lb or 1,000 lb bombs. A total of 1,702 Tempests were built.

The Tempest II was destined for operations against the Japanese in the Far East but the war ended before it was deployed. Three squadrons were sent to post-war Germany and four squadrons were sent to India. In 1949 Tempest IIs of 33 Squadron were sent from Germany to be used in the ground attack role against terrorists in Malaya. It was powered by a Bristol Centaurus radial engine and was considered to be one of the most powerful fighters of its day. 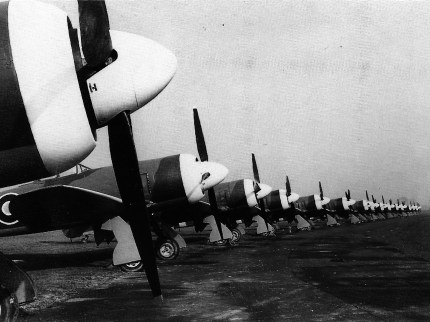 At least twenty Tempest II fresh off the production line

At the end of the Second World War and into the Post War era, a wider choice of engines became available. This meant that the Tempest II powered by the Bristol Centaurus 18 cylinder radial engine could be revived. Two prototypes were completed, the design owing much to the examination of a captured Focke-Wulf Fw 190 earlier in the war.

Tempest II prototype LA602 flew on 28 June 1943. It initially had a Typhoon style fin and rudder unit and had a four-bladed propeller. The second prototype LA607 had a larger and rudder and first flew on 18 September 1943. This prototype was used primarily for engine development.

The Tempest II had been intended for operations against the Japanese in the Far East but it suffered production delays for a number of reasons and the war ended before it could be deployed.

Production began in October 1944 with 50 being built by Bristol Aircraft. With the end of the war coming production was switched to Hawkers who built 402, 100 as fighters, 302 as FB II fighter-bombers with strengthened wings and wing racks for bombs up to 1,000 lbs. 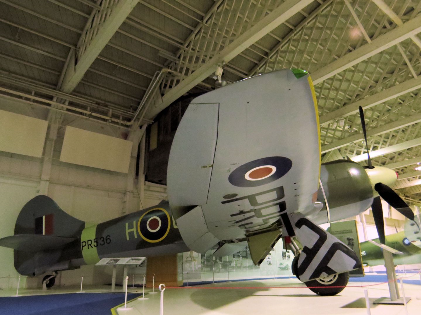 PR536/OQ-H Mk II is on display at the RAF Museum, Hendon