This page is dedicated to chief test pilots who were instrumental in the development of aircraft types produced at Hawker Aircraft at Langley Airfield.

Known as George but born Paul Ward Spencer Bulman on 8th April 1896 in Luton, Bedfordshire, Bulman flew with No 46 and later No 3 Squadron Royal Flying Corps. He flew Sopwith Camels and was awarded the Military Cross in 1918 for his conduct during The Battle of Courtai. He was promoted to second lieutenant and later the same year awarded the Air Force Cross.

Between the wars, as a flying officer for the newly-formed RAF, he worked as a test pilot on Sopwith and Blackburn aircraft. He was one of a few people to fly the Brennan helicopter. In 1922. In 1925 he transferred to the RAF reserve and became chief test pilot for HG Hawker Engineering, later to become Hawker Aircraft. He also won several air races flying the Hawker Cygnet. He became a director of Hawkers in 1935. 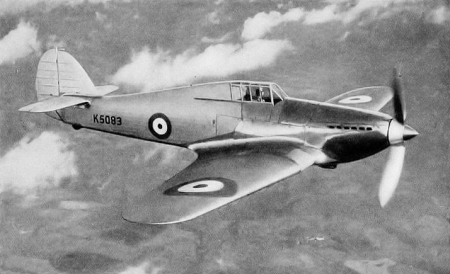 Bulman took the prototype Hawker Hurricane, K5083, on its first flight at Brooklands on 6th November 1935.

In 1943 Bulman was awarded the Commander of the Order of the British Empire (CBE). In 1945 he resigned from Hawker to pursue his own business venture that was unrelated to aviation. He died on 6th May 1963 in Surrey.

Apart from testing several aircraft types, Bulman made the first flights of the following Hawker aircraft:

George Bulman married Constance Dorothy Wiseman in 1920. Their only child, Flying Officer Raymond Paul Bulman, was killed in action with 605 Squadron over Germany in 1945. He was 21 years old.

Born on 14th April 1911 in Doncaster, Yorkshire, William Humble qualified as a mining engineer at the University of Cambridge. He didn’t pursue this career however, and instead became a racing and aerobatic pilot.

Humble learnt to fly in the Auxiliary Air Force and became a pilot officer in 1930 in the Special Reserve of the RAF. In 1932, he was promoted to flying officer and joined the newly-formed No 504 Squadron. In 1936 he joined another new squadron, No 609. In October 1940 he became a test pilot for Hawker Aircraft and flight tested Hurricanes as they came off the production line.

Later in the war, Humble tested and helped develop prototype aircraft such as the Typhoon, Tempest, Fury and Sea Fury. In 1945 he became chief test pilot and in 1947 made the first test flight of the P.1040 jet which was later to become the Sea Hawk. He retired from flying in 1948 and became a sales executive for Hawker being particularly successful in the Middle East.

He came back to Britain in the late 1980s as his health began to deteriorate. He died on 1st March 1992. He was the grandfather of BBC TV presenter Kate Humble.

Humble flew the P.1040 prototype from Boscombe Down on 2nd September 1947. It is pictured here at Langley

In late 1939 Roland Beamont was stationed at Lille in Northern France flying Hurricanes with No 87 Squadron RAF as part of the British Expeditionary Force. During this time he shot down three Luftwaffe aircraft.

He later fought in the Battle of Britain and claimed another three ‘kills’. He also flew night intruder ground attack missions on German forces in France He was awarded the Distinguished Flying Cross in 1941 and posted to No 79 Squadron.

In December 1941 Beamont was attached as a test pilot to Hawker Aircraft at Langley until July 1942. Although he wasn’t employed directly by Hawker, he was instrumental in the survival of the Typhoon. The early Typhoons were troublesome and difficult to fly but Beamont clearly recognised the strengths of the design and helped Hawker fix it.

Beamont was next assigned to No 609 Squadron flying the Typhoon and was promoted to Squadron Leader. In 1943 Beamont was again attached as a test pilot at Hawkers, this time to work on the new Tempest fighter alongside Hawker’s own chief test pilot Bill Humble.

With D-Day looming in 1944, Beamont formed No 150 Wing (Tempests) as acting Wing Commander. He shot down two Me 109s in the first few days of the invasion before the wing was reassigned to intercept V-1 Flying Bombs over south-east England. The wing shot down 638 as a whole with Beamont shooting down 32 himself.

Before the end of 1944 the threat of the V-1 had all but disappeared and 150 Wing were redeployed to support the Liberation of Europe. Beamont, based with his squadron at Volkel in the Netherlands shot down an Fw 190, his ninth kill of the war. Soon after, on his 492nd mission, he was himself shot down and taken as a Prisoner of War. He was detained at Stalag III near Breslau then Stalag III-A near Potsdam before returning to Britain in May 1945.

After the war, Beamont became a test pilot again, now for English Electric, and flew such aircraft types as the Canberra, Lightning and TSR 2. He later became Director of Flight Operations at the Warton division of BAC. He died on 19 November 2001 at the age of 81.

Born on 3rd September 1902 in Bexleyheath, Philip Gadesdan Lucas was educated at Epsom College then began an apprenticeship with Vickers.

In 1926 he joined the RAF and in 1931 joined Hawker Aircraft as a test pilot. In 1939 he became chief test pilot flying Hurricanes, Typhoons and Tempests from the production line and for development purposes.

In 1941 Lucas managed to land a prototype Typhoon safely after a severe structural failure during a test flight. Typhoons were notorious for structural and handling problems during their early development. For his courage and skill Lucas was awarded the George Medal.

Lucas flew the prototype Tempest V HM595 on its maiden flight on 2 September 1942 from Langley.

In 1946 Lucas retired from test flying and became General Manager of Hawker Aircraft retiring in 1967, the company having now become Hawker Siddeley Aviation. He died on 18 December 1981 aged 79.

The prototype Sea Fury, SR661, made its maiden flight on 21 February 1945 flown by Lucas. The aircraft had fixed wings and was powered by a Centaurus XII engine driving a four-bladed propeller.

Wade was born 27th January 1920 in Wandsworth. He learned to fly at Gatwick and joined the RAF Volunteer reserve. Wade flew Spitfires during and following the Battle of Britain he destroyed seven enemy aircraft. He was nicknamed ‘Wimpy’ after a character in the Popeye cartoon.

In 1941 he became a pilot gunnery instructor and also worked for the Air Fighting Development Unit at Duxford. At the end of the war he joined Hawker Aircraft as assistant to chief test pilot Bill Humble and became chief test pilot himself when Humble became a sales manager.

Neville Duke was born on the 11 January 1922 in Tonbridge, Kent. He joined the RAF as a cadet in 1940 and was commissioned at No 58 Operational Training Unit (OTU) in February 1941. He was posted to No 92 Squadron at Biggin Hill in April flying Spitfire Vs. By August he had claimed two Me109s. In October he was posted to No 112 Squadron flying Curtiss P-40 Tomahawks.

Duke crashed his aircraft (AM390) on a familiarisation flight and was also shot down on two occasions. He was still scoring victories himself however, and by February 1942 had scored eight kills.

After a six month break away from operations as an instructor, Duke re-joined 92 Squadron which was now in North Africa and flying Spitfire Vs modified for desert operations. By the end of this second tour of duty in June, Duke had been made a flight commander and scored fourteen more victories. Duke was squadron leader by the time he was assigned again to flying instructor duties.

Duke’s third tour began in March 1944 as Commanding Officer of 145 Squadron flying Spitfire VIIIs in Italy. He shot down five more aircraft in May but in June he was shot down by ground fire. He was sheltered by Italian partisans until US forces arrived. Returning to his squadron, he scored his final kills in September 1944 bringing his tally of outright victories to twenty-seven.

Duke returned to Britain and became a test pilot for Hawker Aviation in January 1945. The following year, after attending the Empire Test Pilots’ School at Cranfield, he joined the RAF High Speed Unit and flew test flights at high Mach numbers and high altitudes.

Duke resigned from the RAF and joined Hawker as assistant test pilot. After ‘Wimpey’ Wade’s death in 1951, Duke became Hawkers chief test pilot and was involved in the development of the Hunter.

In 1955, Duke had to make a forced landing in a Hunter at Thorney Island fracturing his spine. The following year, another heavy landing caused further injuries to his spine and he was forced to resign. He took up freelance aviation consultancy and later formed Duke Aviation. He also became a test pilot flying the Edgley Optica and Brooklands Firemaster 65.