The Ford Motor Company opened a commercial vehicle component factory at Langley Airfield in 1949 and in 1959 bought the entire ex-Hawker site.

They built a production line there for the new Transit van, the most radical light commercial vehicle the world has ever seen. 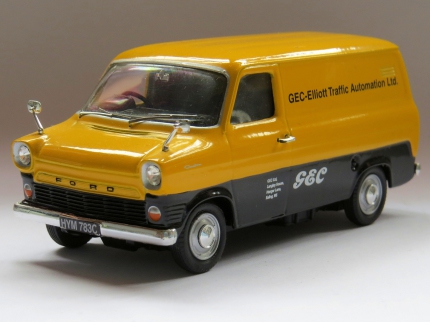 This model of a Ford Transit Mk 1 depicts an actual van which was built at Langley. The vehicle itself is privately owned and is maintained in a roadworthy condition.

Production of the Transit at Langley began in 1965. It had a broad track which meant the load area was designed to carry sheets of standard 8x4ft boards making it popular with builders. BBC TV Top Gear presenter Richard Hammond said flippantly: ‘…and builders only think in eight by four; show a builder a picture of Westminster Abbey and he will say “A lot of eight by four went into that”.’

The Transits broad track, its car-like steering and its car-like suspension gave it car-like handling and the 2·0 litre petrol engine version had a top speed of 90mph, faster than most popular cars of the time. Villains loved it for its car-like performance and space for 1·75 tonnes of loot, van. According to the BBC TV programme Top Gear, British police said that in the 1970s, 95% of all robberies that involved vehicles, a Ford Transit would be one of them and it became described as 'Britain's most wanted van.’ 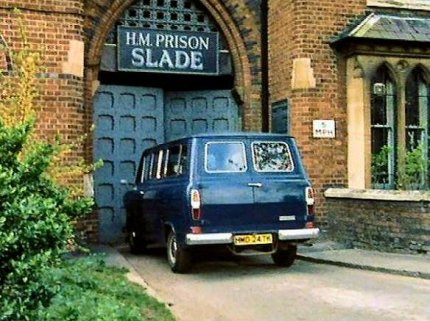 The Transit was becoming so successful that soon the Langley factory couldn’t cope with demand so in 1972 production was moved to Southampton.

Several marks of the vehicle have been built and the adaptable design meant that the variations of specification in terms of engine, length, body, colour, trim etc gives the buyer a huge choice. A staggering 13 million combinations are available of the current model. By 2011 six million Transits had been produced worldwide. 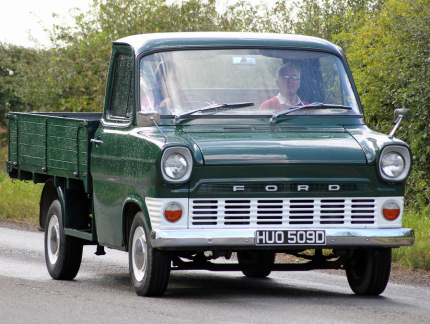 Over the years the basic Transit format has been copied by rival manufacturers including Citroen, Fiat, Hyundai, Mercedes-Benz, Peugeot, Renault, Vauxhall and Volkswagen

As a tribute to the Transit’s 40th birthday, Top Gear recruited Sabine Schmitz to try to take a Transit Mk4 around the Nürburgring aiming for a lap time of under 10 minutes. This was shown in Series 6, Episode 7.

After taking Richard Hammond around as a passenger in 10 min 23 sec, the Transit was streamlined using gaffer tape on all the panel joints and made lighter by removing all unnecessary weight including Hammond. With a Dodge Viper to run in front to try to increase slipstream Sabine had another attempt. Her final lap time was 10 min 8 sec.

Styled by Patrick Le Quément who was also responsible for the design of the Ford Sierra and later the Renault Twingo cars, the Ford Cargo went into production in 1981 at Langley. It was an adaptable design and the back could be fitted with a flat bed, drop side, tipper, a HIAB crane as well as solid and curtain side containers. Of course the goes on with the more specialist cherry picker, vehicle recovery etc. 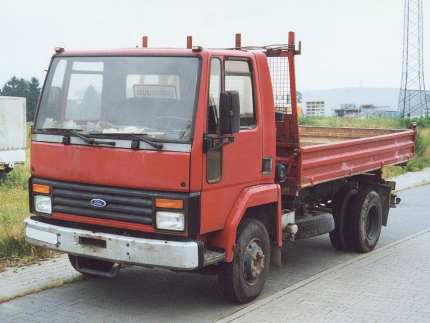 A Ford Cargo in Germany

In 1986 Ford sold its commercial vehicle division of Europe to Italian company Iveco and the model became known as the Iveco Ford Cargo. When it was updated in 1991 it became known as the Iveco Eurocargo. After the recession in the 1990s, Iveco rationalised its production operations and the Langley plant closed in October 1997. Demolished a year later, the site was redeveloped for housing, Royal Mail’s International Mail Centre, warehousing and offices.