In January 1990, Malcolm Stowell, Chairman of the Windsor and District Organists' Association, founded a series of Saturday lunchtime concerts. These concerts proved to be popular and in 2017, that is 27 years later, the series of concerts is still going strong.

In all those years Malcolm, who is also Organist and Choirmaster at St Mary's, has established close relationships with talented local artists and has personally arranged and overseen every concert since they began.

In 2005, Mayor Laurie Gleeson presented Malcolm Stowell with the 2004 Arts Award in recognition of his services to music in Slough. 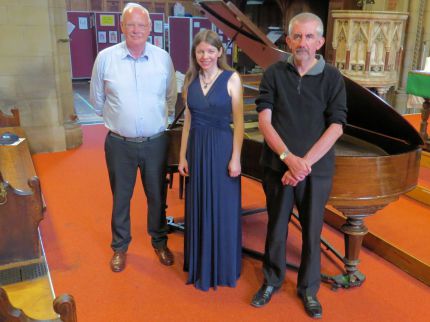 Charley Brighton plays the euphonium, gives tuition in brass instruments and is a conductor. He also maintains the Euphonium Collective Website which can be accessed by clicking the button below.

The Saturday Lunchtime Concerts generally last 30-35minutes and include a diverse range of players from solo artists, ensembles and choirs. Instruments are also diverse including brass, woodwind, string and percussion. On top of this St Mary’s has a fine church organ.

My first lunchtime concert at St Mary’s was on 24 June 2017. Malcolm informs me that this is number 1,568! According to the Euphonium Collective website, in 2016, 53 concerts were given by a total of 29 individual performers, 22 of which were male and 7 female and there were 8 choirs. 513 pieces of music were played to a total audience of 2,905. The concerts raised £3,751 for Church funds.

I must admit that my knowledge of classical music is lacking and I’m not a professional critic but on these pages I will try to give my view on some of the recitals that I attend. I put this down to my laziness with numbers.

In classical music I tend to like named pieces such as Rimsky-Korsakov’s Scherazade. The movement The Sea and perfectly gives the impression of rough seas with crashing waves and whirling gales. Prokofiev’s Troika conveys precisely the excitement of a ride on a sled drawn by three horses. Not two – they would not be as fast; and not four as that would be over the top.

The Chorate Chamber Choir are a Reading-based mixed voice chamber choir formed in 2009 by a group of experienced singers. They use their performances to raise funds for good causes.

The group gives recitals at churches in Reading and carol sing for local charities. They regularly give concerts at St Mary’s church in Slough as part of the Saturday Lunchtime Concert Series. In March 2016, they took part in the 1,500th concert of this venue. 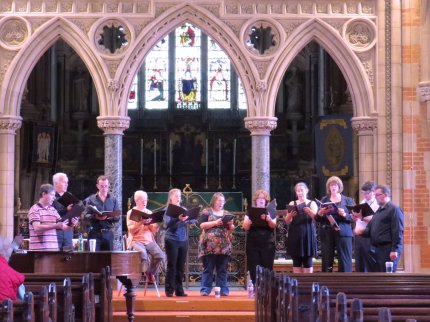 During pre-recital warm-up The Chorate Chamber Choir as shown in the photograph are: 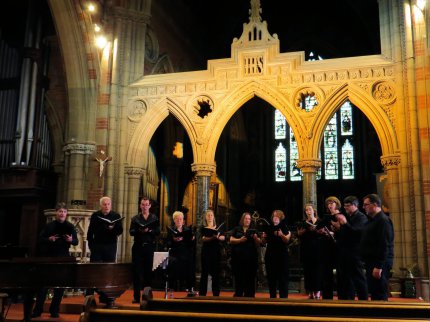