Taking five years to build and landscape the Jubilee was opened by HRH the Duke of York in July 2002. The Jubilee River provides new opportunities for leisure in the area. Whether you enjoy walking, jogging, running, cycling, horse riding, fishing, boating, nature watching, picnicking etc there is something for everyone. All of it is open to walkers and cyclists but there are some restrictions for those on horseback. 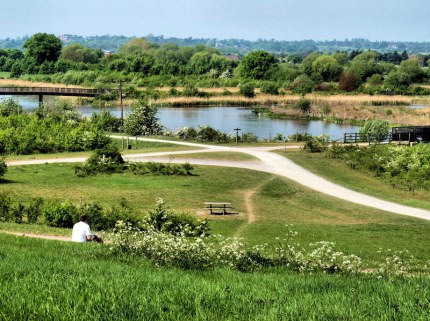 The Jubilee River was built to relieve the risk of flooding from the River Thames above Maidenhead to below Windsor. It starts its journey close to Boulters Lock to cross the northern edge of Dorney Common and the southern edge of Slough to re-join the Thames near Datchet. Much more than a compromise has been achieved in solving a serious risk of flooding in the area in a way that is in harmony with nature. 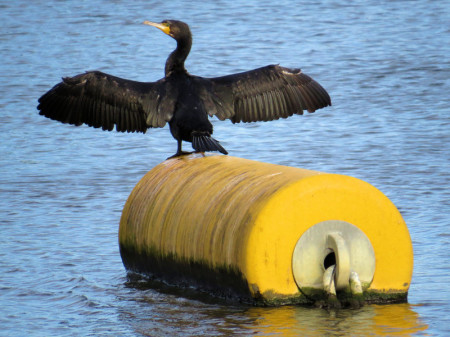 The area of the Jubilee River that falls within the boundary of Slough Borough Council is about 5km (3·1 miles) long. It begins about 200m west of Dorney Footbridge and ends at The Myrke Footbridge to the east. From Dorney Footbridge we start at the Lake End car park near the Pineapple pub, Dorney. 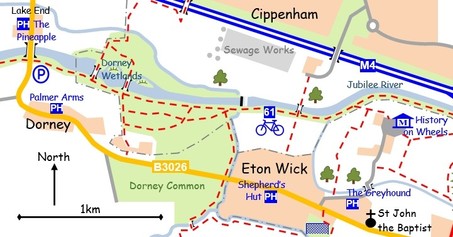 Path routes shown are not necessarily indication of rights of way

The path is on the south bank and the river flows east. Just beyond the access gate is an area for with platforms built on the bank for licenced fishing. Further on is a picnic area with a couple of picnic tables. The bank is very reedy here and the river starts to widen to become Dorney Wetlands. 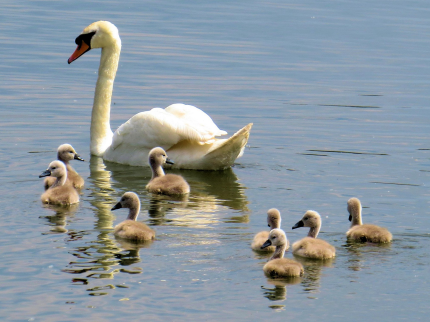 The first bridge is called Dorney Footbridge and it offers an alternative short route via the north bank to the next bridge or a route to Lower Cippenham. After the bridge, and staying on the south side, is a broad reed bed which can be explored on a boardwalk which has three observation platforms. On the far or north side is a low island. 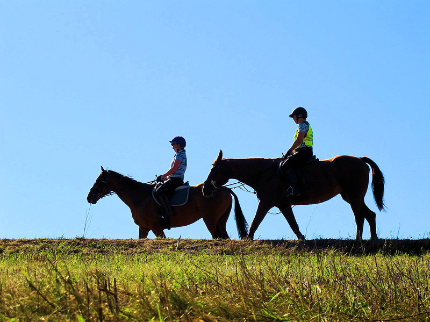 Dorney Wetlands is a wide part of the river with a series of low-lying islets specifically created for migrating and nesting birds. It is particularly popular with waders such as lapwing, golden plover, ringed and little ringed plover during the winter.

In the summer, screaming swifts wheel around the sky; while swallows and martins fly low hunting for small flying insects. Birds of prey include buzzards, red kite and kestrels. Hobbies are an exciting summer visitor as they twist and turn chasing down dragonflies. 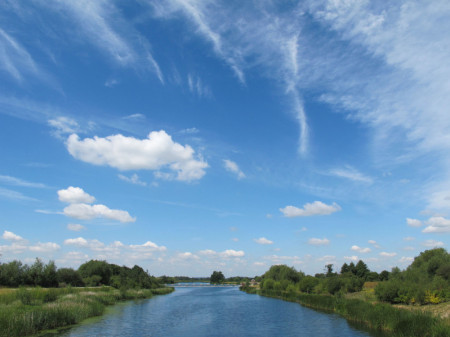 Wildfowl include mallard, tufted duck, shoveler, teal, gadwall, pochard and shelduck, as well as mute swan, Canada geese, moorhen and coot. Cormorant, little grebe and great crested grebe also take their places on the water. Heron and the less common little egret wait patiently around the banks. You may be lucky enough to see a kingfisher racing purposefully just above the water, its urgent piping call a dead give-away. Other wildlife is present in this area but it’s the birds that steal the show. 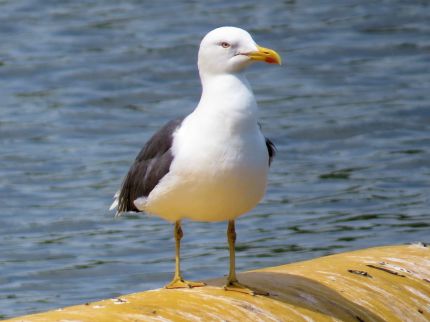 Continuing on you come to a crossroads in the path. Left takes you to the north bank via Manor Farm Bridge; right takes you south to Manor Farm and Dorney Common; straight on follows the Jubilee to Slough and beyond. To the south-east is a path worn in the grass that leads to the top of the beginning of a ridge where there is a plinth. On the plinth is a plaque which, among other things, points the direction and distance to Marble Arch (34km). I wonder if there’s a plinth at Marble Arch pointing the direction back to Dorney Wetlands. 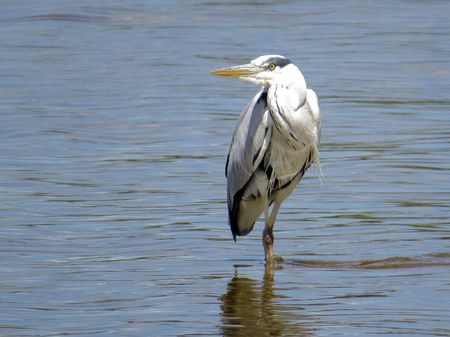 From this high spot two prominent features break the skyline: Windsor Castle (4km) is to east-south-east; and Slough Power Station (3km) is to the north-east. Incidentally, the ridge that we are on is man-made from much of the excavated materials from the river. Back down on the lower path, from the bridge at the water’s edge are a couple of unroofed bird hides and on the right of the path is a picnic area. Along the path on each side are areas of trees and shrubs planted as part of the scheme. 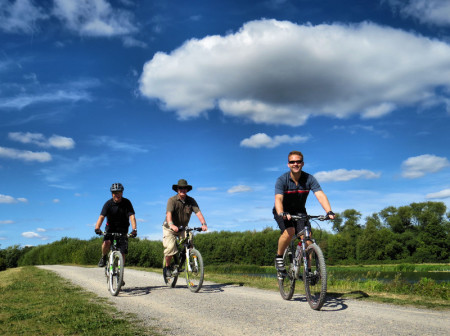 The river gradually begins to narrow until Manor Farm Weir. There’s a line of floats across each weir, the purpose of which is to deter canoeists from going down the weirs. The floats are popular resting places for birds such as gulls and cormorants. Further downstream is another cross roads. Left is Wood Lane Bridge giving access to Wood Lane, Slough; right is a path to Eton Wick; and straight on for Slough central and beyond 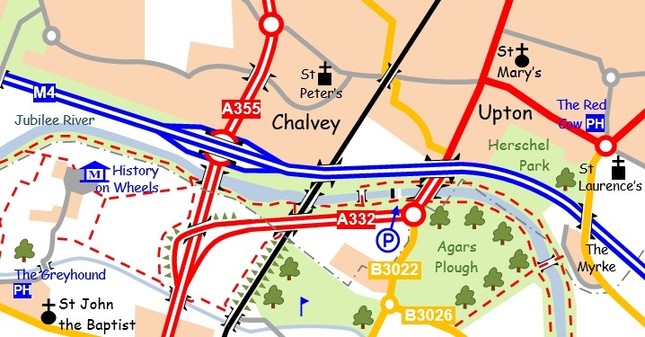 Path routes shown are not necessarily indication of rights of way

After the bridge the river bends to the left and then to the right to a straight section nearly half a mile long. To the north or left, the M4 motorway thankfully hides behind a tall embankment; to the south are open fields. At the end of this section the path goes down to go under the A355 Windsor Relief Road. The next feature is the Windsor and Eton Railway Branch Line. The path to the left leads into Chalvey; the path along the railway follows the viaduct for a back way into Eton. 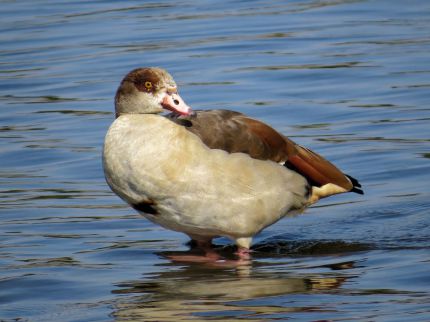 Straight on is a concentrated area of various bridges and a weir and there are choices as to which side of the river to take. At the end of this section is a car park for 18 cars, access being from the A332 roundabout. There is also a picnic area with a couple of picnic tables. From here, cross on the A332 dual carriageway to continue on the Jubilee. It’s a little bit quieter here even though the river is close to the M4. 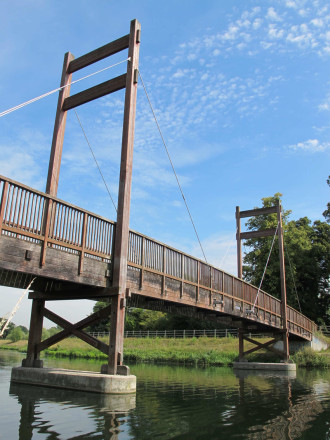 Just under a kilometre from the road is another crossroads on the path: right goes across the fields of Agar’s Plough to Eton College; straight on is the Jubilee to Datchet; and left is a bridge to The Myrke. The bridge is special as it’s the only suspension bridge over the Jubilee River and is a rather fine end to this trip. 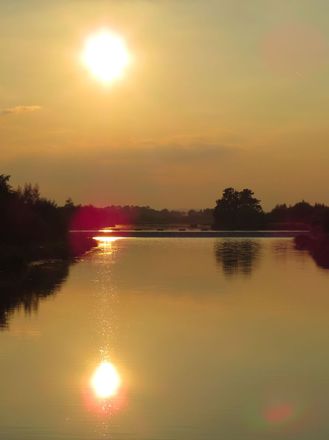