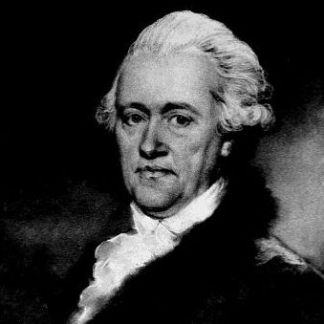 Born in Hanover on 15 November 1738, Friedrich Wilhelm Herschel was one of ten children of Isaak Herschel and Anna Ilse née Moritzen. Herschel was to become a prolific astronomer and is most famous for the discovery of the planet Uranus.

Herschel's father was an oboist in the Hanover Military Band and Wilhelm and his brother Jakob followed in their father’s footsteps and were engaged as oboists the Hanoverian Guards regiment. During the Seven Years War of 1756-1763, the guards suffered a defeat at the Battle of Hastenbeck. In late 1757, the Izaak sent his son’s to seek refuge in England.

Now nineteen. Wilhelm learned English quickly and chose to go by the English versions of his names Frederick William. In addition to the oboe, he played the violin and harpsichord and later the organ and went on to compose a number of musical works.

Herschel moved to Sunderland in 1761 when Charles Avison engaged him as first violin and soloist for his Newcastle orchestra. He played for the orchestra for one season. He then moved to Leeds and Halifax where he was the first organist at St John the Baptist church. In 1766, Herschel became organist of the Octagon Chapel, Bath, and also became Director of Public Concerts. 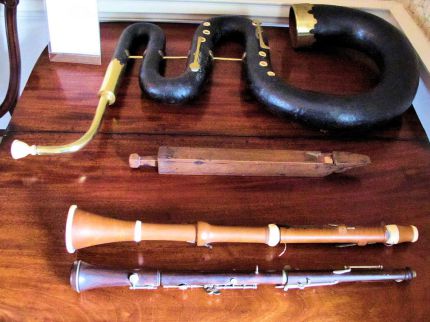 Serpent and a couple of recorders at the Herschel Museum

William’s sister Caroline arrived in England in August 1772 to live with him in New King Street, Bath. At the age of ten, Caroline had been struck with typhus, which stunted her growth. She never grew taller than four feet three inches. She also suffered vision loss in her left eye. Her family assumed that she would never marry. Following Izaak’s death, her brothers William and Alexander proposed that she join them in Bath, England.

In Bath, Caroline became responsible for running William's household, and began to learn to sing. Herschel was appointed director of the Bath orchestra, with Caroline often appearing as soprano soloist. William’s brothers Dietrich, Alexander and Jakob also appeared as musicians of Bath. 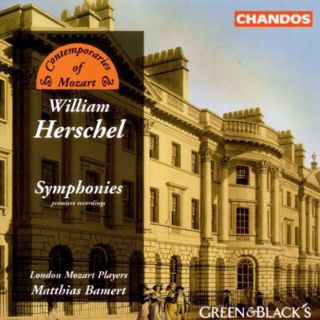 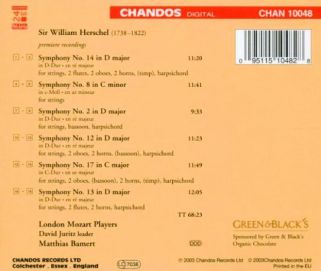 Herschel spent his spare time working on astronomy and mathematics. In 1774, with the help of his sister Caroline who was an astronomer in her own right, Herschel began a systematic and survey of the night sky. In 1781, using a 6 inch diameter 7 foot focal length telescope in the back garden of his house in Bath, he noticed an object that he initially thought it to be a comet. 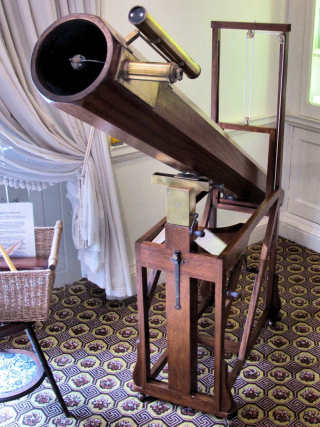 Russian Academic Anders Lexell computed the orbit of the object that Herschel had discovered and found that it was more probably a planet. Herschel agreed and that it must be beyond the orbit of Saturn. Herschel called the new planet the Georgian star (Georgium Sidus) after King George III until the name Uranus was universally adopted.

In 1782, Herschel was appointed ‘The King’s Astronomer’ and he and Caroline subsequently moved to Datchet near Slough. In June 1785, William and Caroline moved to Old Windsor but in 1786 they settled in a new residence on Windsor Road in Slough where William would live the rest of his life.

In 1788, Herschel married widow Mary Pitt née Baldwin at St Laurence’s Church, Upton, and they had a son, John Frederick William. Caroline moved to a separate residence when William married but continued work as his assistant.

Herschel built his own telescopes and made more than 400. On one occasion he was recorded by his sister as having spent up to 16 hours continuously polishing a primary mirror. His most famous telescope was the reflecting telescope that he erected in 1789 in the back garden of Observatory House, his home in Slough. It had a 49in diameter primary mirror and a 40ft focal length. 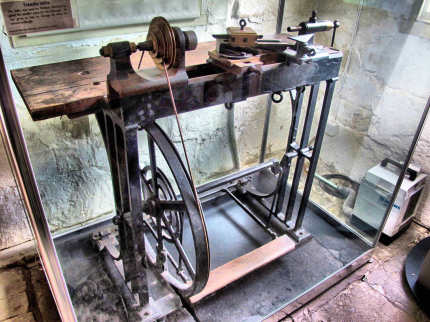 This treadle lathe was presented to Herschel by King George III at around the time that the astronomer moved to Datchet.

William Herschel built the Great Telescope, the largest in the world in its day, on the lawn of his home in Windsor Road Slough in 1789. The 49 inch reflector, which he cast and polished himself weighed over a ton, and the telescope had a 40 foot focal length. Using the telescope he discovered two satellites of Saturn, the rotation of Saturn’s rings, the motion of binary stars and gained an understanding of the Milky Way. The telescope stood for 50 years until 1839 when William’s son John demolished it as the woodwork had become rotten. 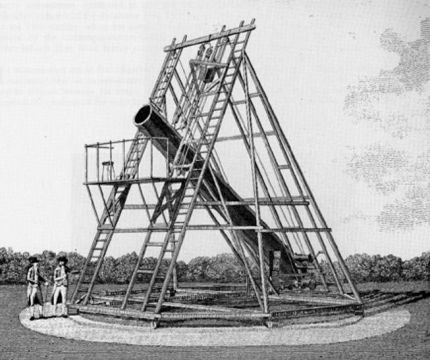 An impression of Herschel’s Great Telescope that he built in the back garden of his house in Windsor Road, Slough

This Georgian house was built on the Windsor Road in Slough and was owned by the great astronomer William Herschel and his family. In the back he built a large telescope to make his observations. 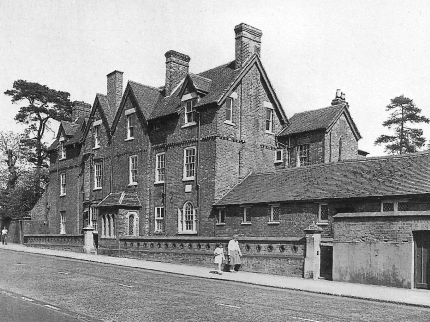 The quality of the photograph suggests that it was taken either just pre or just post Second World War. It was torn down in 1958. 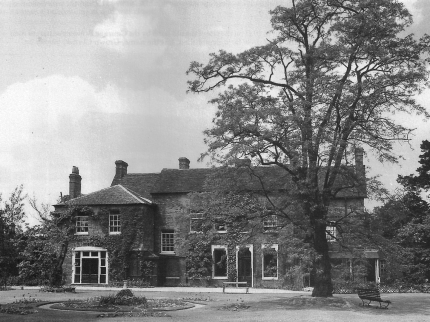 This photograph of the rear view of the property is significant because the circular flowerbed in the left foreground is where Herschel positioned his famous 40ft telescope. Sadly, like so much of Slough’s historic architecture, the house fell victim to the town’s great march to progress in 1958 to be replaced by some white plastic-clad housing. Agreat opportunity lost. This could have made a really good venue for the Slough Museum. 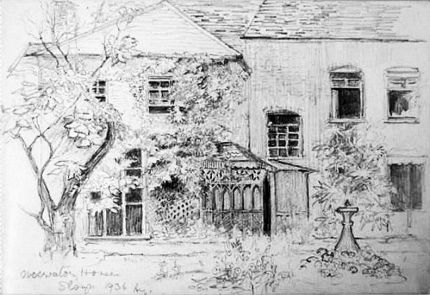 This version has been highly enhanced.

Herschel discovered four new moons in the Solar System and observed some 2,000 nebulae and star clusters. He recorded them in The General Catalogue of Nebulae and catalogued 145 double stars. He also discovered that Polaris, or the Pole Star, was a double star which was later named Polaris B. Much later it was discovered that there is actually a third star in the system. 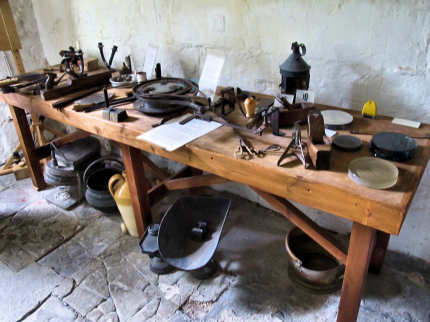 A recreation of Herschel’s workbench in his house in Bath

Herschel measured the axial tilt of the planet Mars at 25°. This is very close to the axial tilt of Earth at 23·5°. This means that like our planet, Mars goes through seasons. He discovered that the Martian ice caps, first observed by Giovanni Domenico Cassini (1666) and Christiaan Huygens (1672), changed in size which indicates seasons on the planet.

In 1800, Herschel was testing filters and prisms so that he could observe sunspots. When using a red filter with a prism and a thermometer he found there was a lot of heat produced. Further experimentation led to Herschel's conclusion that there must be an invisible form of light beyond the visible spectrum. He had, by accident, discovered infra-red radiation. 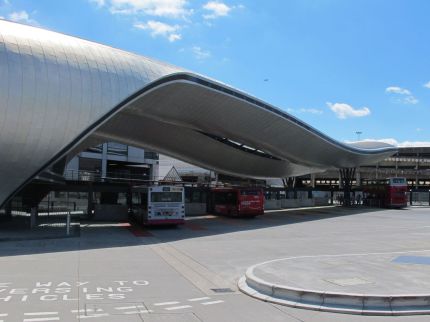 The two tails of the bus ‘shelter’ in Slough undulate at different frequencies to represent Herschel’s work with radiation.

Herschel was the first to realize that the solar system is moving through space and understood the structure of the Milky Way concluding that it was disk-shaped.

He was the first to have some real appreciation of the enormity of the universe, and an understanding of the concept of light years. In 1871 he wrote:

'I have observed stars of which the light, it will be proved, must take two million years to reach the Earth.’

It took 100 years for this principle to be proved but proved it was.

Death and in memoriam

William Herschel died at Observatory House on 25th August 1822 and he was laid to rest at St Laurence’s Church, Upton, on 7th September 1822. There is an epitaph to him in the church, as well as a beautiful stained-glass window depicting the sun, moon and the planets that were known in his lifetime. Herschel is also shown using his telescope.

There is a monument in Herschel Street, Slough, close to where the 40 foot telescope was positioned. The last surviving residence Herschel occupied is 19 New King Street, Bath, which is now the William Herschel Museum. 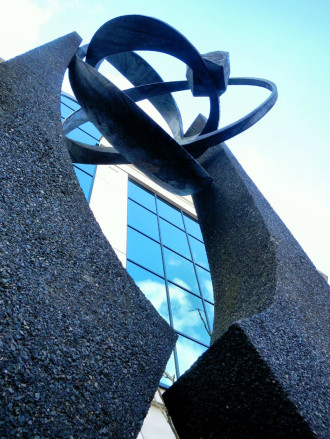 The Herschel Museum of Astronomy