Driving in a car west to east along Albert Street/Mere Road (A412) and it’s easy to get t poor impression of this part of Slough. Starting at the Windsor Road (A332) traffic lights, on the north side is a couple of tall office buildings, then St Mary’s Church lays back from the road beyond its large graveyard. After the junction of Church Street the old buildings of Upton Hospital is obscured by a hotchpotch of modern buildings which must have been put up with no regard to their design.

Next comes a row of shops which lay back in the original route of Albert Street. A little further on is the Red Cow Public House which is now known as the Ye Olde Red Cow. Incidentally, the word ‘Ye’ was pronounced ‘the’. The word ‘Olde’ is not a real word and is thought by many to be a mock-antique variant of the world ‘old’ Indeed ‘olde’ is not included in many English dictionaries. 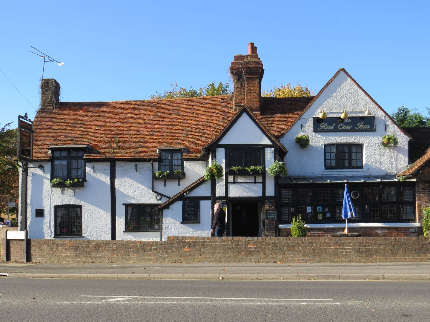 Built in the 16th century, the Red Cow in Albert Street is one of the oldest pubs in Slough.

The order of play on the south side of the street is basically either anonymous modern housing followed by some untidy housing from the 1960s. It really is quite awful when you consider the gems that this mess conceals.

Things improve after the Red Cow roundabout as Upton Court Road consists mainly of a large estate built possibly in the early 20th century on the north side and the vast views of Upton Court Park on the south side. There are also fine views of Windsor Castle from here including one at the end of an avenue of trees in the west end of the park.

This is an area rich in beauty and interest though, you just need to scratch beneath the surface. 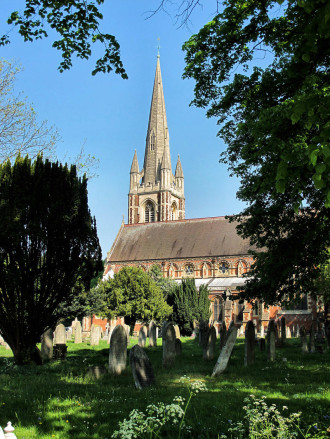 St Mary’s is a red brick grade II* listed church built in the Gothic style. It was designed by John Oldrid Scott and funded in part by Queen Victoria. To read about the church in more detail please click on the button.

Sandwiched between Slough town centre to the north and the M4 motorway to the south is Upton Park Estate. It was developed in the 1840s as an up-market residential area which, in those pre-motorway days would have bordered on the fields of Agar’s Plough, Eton.

Joseph Paxton (1803-65) is thought to have provided the layout; architect Benjamin Baud (1807-75) designed 50 houses but only 35 of which were actually built; and James Thomas Bedborough was in charge of the construction. From the 1840s, the park took about 20 years to complete. The remaining original houses in the Upton Park Estate are three groups and a lodge. 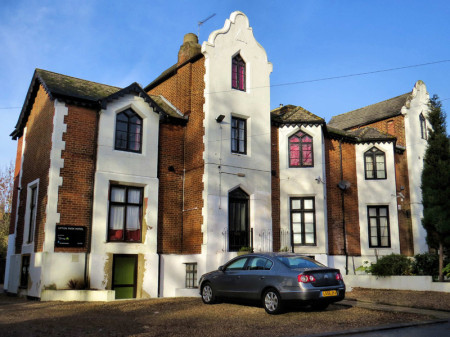 Victoria Terrace – This terrace originally consisted of three blocks of houses but the most westerly one was destroyed by fire. The blocks consisted of 16-bedroomed houses occupied by the gentry and had servant’s quarters During the 1990s, the houses were divided into flats along with new houses and flats that make up Bulstrode Place.

West Villas – The villas towards the end of the drive are part of the original architectural scheme of Upton Park Estate. There is a rather attractive terracotta plaque dated 1885 halfway down the terrace. The West Villas are featured in the header photo of this page.

East Villas – Only two of the original 1840 buildings are still standing, the others were replaced in the 20th century. Publisher George Bentley lived at No2 until ‘the Mere’ was built.

Diana Lodge– The only surviving entrance lodge to Upton Park Estate. It is named after the Goddess of Hunting and she is depicted in a frieze in the gable end of the building.

The frieze on Diana Lodge

Merton Priory owned the manor of Upton Court from 1156 and about 1330 a new manor house was built. In the Dissolution of the Monasteries in 1537, the manor was confiscated by Henry VIII. It later became the seat of the Lord of the Manor and, in 1711; the ownership of the house was passed to the Lascelles family. They kept the house for over 100 years. The changed ownership several times until it was bought by Francis Groves, a local publisher, in the 1950s. 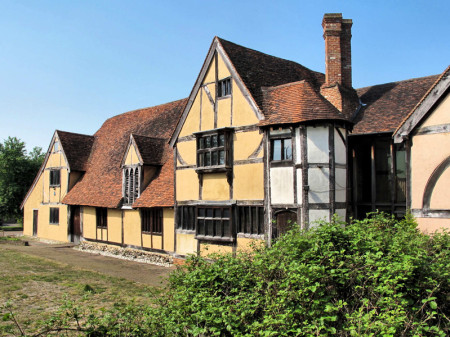 Groves wanted to turn Upton Court into a museum but the local council wouldn’t agree. Without knowing the detail it’s difficult to comment other than in retrospect it’s a shame that Slough Museum didn’t find a home in this historic part of Slough. After Groves died in 1986, Upton Court was bought and restored by the owners of the Slough Observer newspaper.

Richard Bentley was the last head of the publishing firm Bentley’s. Founded by his grandfather, also Richard, it published works by Charles Dickens, Benjamin Disraeli, William Harrison Ainsworth and other notable authors.

When Richard aged 6, he was brought to Slough in 1860 when his parents, George and Anne Bentley, moved from Shropshire to live at 2 East Villas, Upton Park Estate. George and Richard Bentley commissioned the building of the Mere in a neo-Tudor timbered style and the family moved in once it was completed in 1887.

When Richard’s father died in 1895, he took over the family business. In 1898 the firm was taken over by Macmillan Publishers. Richard focussed on studying local history, meteorology, botany and other sciences and he wrote a number of publications on these subjects. Richard Bentley died at home in 1936, aged 82. His wife Lucy continued to live at The Mere until 1961, when the house was sold. Lucy Bentley then moved to Windsor and died at the age of 95. The couple were childless. 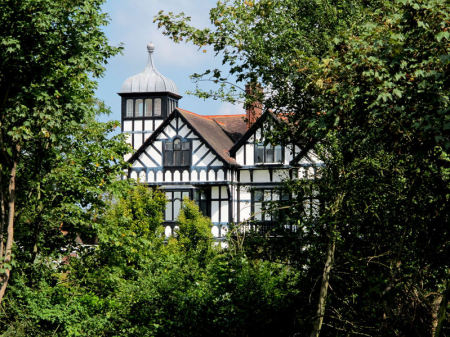 The Mere incorporates some advanced features for its day. The windows were an early version of double-glazing and the walls were double skinned not unlike modern cavity walls. The house remained with the family until 1960. The National Foundation for Educational Research (NFER) has occupied the house since 1964.

Workhouses were ostensibly built to help poor people survive and make progress in their lives. By today’s standards the conditions were utterly inhuman.

Some workhouses existed well into the 20th Century and the Eton Union Workhouse, built in 1836, was hardly an exception. Having been built specifically as a workhouse in 1836 under the 1834 Poor Law Amendment Act, it did not close until sometime in the 1940s. 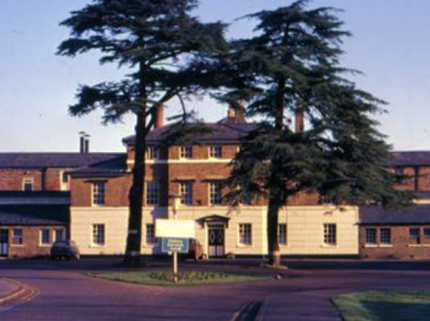 The Eton Union Workhouse could accommodate 440 people and took people from the 19 parishes of the Eton Union including Upton-cum-Chalvey and Wexham. A chapel was built in 1837 and an infirmary to take 80 patients was added in 1906. It was regarded as a model of its type.

People were sent to the workhouse for many reasons, such as destitution, physical illness, mental illness, or homelessness. They may stay there for a few days or for the rest of their lives. Married couples were not allowed to live together and children would parted from their parents. Boys and girls were educated separately and some children were boarded out at the School of Industry in West Norwood. 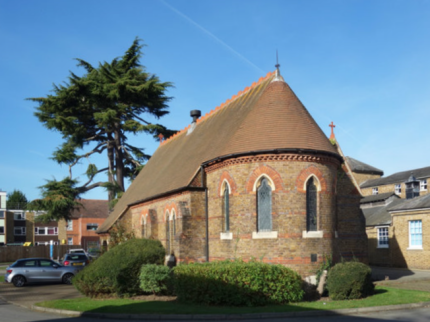 Inmates were expected to work hard on repetitive and soul-destroying tasks. Men might be corn grinding or breaking rocks into stones for roads. Women would cook, clean and do laundry work.

In 1866, the Eton Workhouse was visited by Poor Law Inspector Edward Smith. In his report he stated that the workhouse was very clean and ordered. Included in his report was a damning list of conditions for the inmates. The given list is selected and paraphrased to some extent. 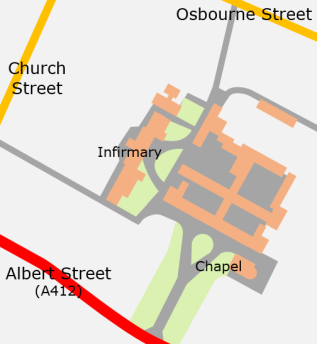 An impression of the plan of the Eton Union Workhouse, circa 1920

On 5 July, 1948, responsibility was transferred to the National Health Service, and the building was renamed Upton Hospital.