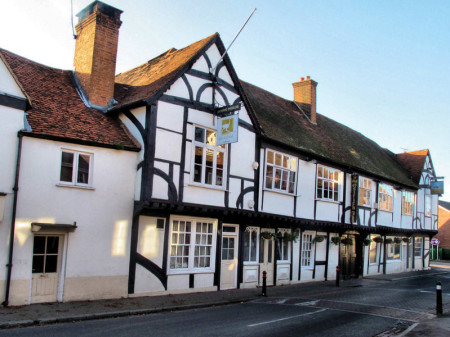 Founded in 1106, the Ostrich Inn is said to be the third oldest pub in the UK. The inn is on High Street, Colnbrook, which was part of the old route of the Bath Road and on the opposite side of the road is the 17 mile stone from London.

The name Ostrich name may have come from one of two different roots. It could be a corruption of the word ‘Hospice’ but in the book Thomas of Reading written by Thomas Deloney and published in 1727, a pub in Colnbrook is referred to as ‘the sign with the Crane’. Cranes and ostriches are similar in profile in that they both have long necks, plump bodies and long legs so it’s quite possible that it might have been a simple brand change sometime in the past.

The pub underwent a major refurbishment in 2006 with modern lighting and modern good quality furniture. However it retains the original beams, fireplaces, crooked stairs and cobbled courtyard. The mixture of old and new works very well though, and it’s a popular pub offering a range of real ales which are rotated on a regular basis. 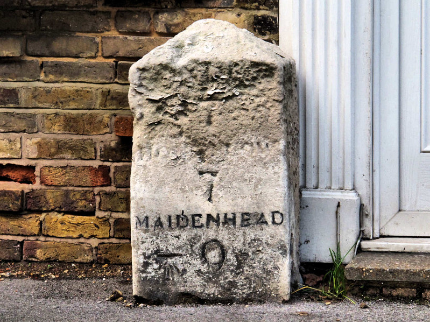 The Ostrich Inn harbours a rather gruesome past. At some time in the inn’s past it was run by a landlord named Jarman. One of the guest rooms, the ‘Blue Room’, was the best presented in the inn and was reserved for lone wealthy travellers.

Jarman was a carpenter and he built a trapdoor in the floor and fixed the bedstead on top of it. In the kitchen below was a cauldron which was for boiling alcohol could be used to boil any fluid.

While the guest was asleep, pins would be removed from underneath the trapdoor and it and the bed would swing down. The guest would fall helplessly into the boiling cauldron below and the poor soul would be killed before he could scream. After disposing of the body, Jarman and his wife would then steal the traveller’s possessions.

Some sixty or so such murders are said to have been committed by Jarman. The occurrence of the murders is disputed across a wide range of years from perhaps the 12th to 15th centuries.

Jarman and his wife’s final murder was of a wealthy traveller named Thomas Cole. They were found out when Cole’s horse was found wandering the streets nearby and this caused a search for his owner which led to The Ostrich Inn. The couple were hanged for their atrocities. The Cole murder story is told in the aforementioned book Thomas of Reading which actually puts the number of murders at nine.

Cole’s body was found dumped in a nearby brook and some say that Colnbrook got its name, from a corruption of ‘Cole-in-the-brook’. I think that this is unlikely as in 1107 the village was recorded as Colebroc which may have meant ‘cool brook’.

As to the validity of the story, the Blue Room is above the kitchen but has no evidence of its horrific history. The floors have been renewed over the years and at time of writing the room was being used as a storeroom. I can’t that help wondering whether one day someone will restore it to its former gory (not a typo). 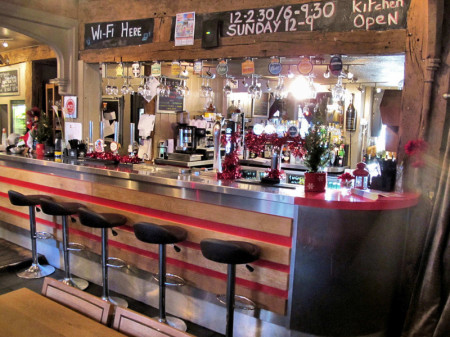 Among other claims to fame for the Inn are that King John is rumoured to have stopped here on the way to sign the Magna Carta at Runnymede and that Dick Turpin used the Inn to hide from the Bow Street Runners.

The main bar downstairs is huge and it took me 36 paces to get from one end of the ground floor to the other. It has a homely atmosphere though because it is split into three by supporting walls. There is a log fireplace in each section and the ceiling is held up by original wooden beams. Halogen spotlights are thoughtfully placed and directed to enhance the areas. The tables and chairs are modern but are chunky and of high quality so fit the décor. It is to the credit of the person(s) responsible for the interior design that they resisted the temptation to try to recreate an earlier period with the furniture. The staff are very friendly and happy to give a short tour of the historic features of the building if they’re not too busy. 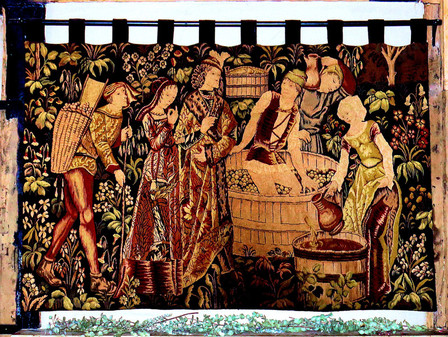 The function room upstairs is large and there is evidence that there was once a balcony along the front that was bricked over quite some time ago to make the room bigger. There is a beautiful tapestry over the fireplace created by Point de l'Halluin. It is said that it commemorates the visit by King John on his way to sign the Magna Carta. On the ground floor there is part of a Roman wall.