Hawker’s first Jet aircraft, the Sea Hawk, was a fine aircraft with very good manoeuvrability and a very steady weapons platform but its straight wings meant that it lacked the higher speeds being achieved by several of its contemporaries. During development stage two Sea hawks were fitted with swept wings creating the P.1052 and P.1081.

The P.1081 In particular paved the way for the Hunter. It had swept wings and tail planes and a revised fuselage with a single jet exhaust at the rear of the aircraft. It first flew on 19 June 1950 and showed great promise but it crashed in 1951.

Camm’s team at Langley were already working on the design of the prototype aircraft that would become the Hunter and experience gained from the P.1081 was instrumental in the development of the aircraft. 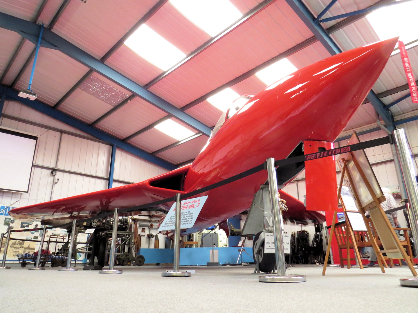 The first prototype, WB188, was modified to become the only F3 produced and on 7 September 1953 it broke the world speed record for a jet achieving 727·63mph at Littlehampton. It was flown by Neville Duke and the record stood for just 18 days when it was beaten by a Supermarine Scimitar.

The Hunter prototype fitted with the preferred Rolls-Royce Avon 103 engine was designated P.1067 and first flew from RAF Boscombe Down on 20 July 1951. The second prototype was capable of carrying armament and flew on 5 May 1952. In case the Avon engine had development problems, the third prototype was fitted with an Armstrong Siddeley Sapphire 101 engine and flew on 30 November 1952.

The Ministry of Supply had already ordered production of the aircraft and the first Hunter F1 flew on 16 March 1953. The first twenty aircraft were used to try further minor modifications.

Hunter F1 WT660 of ‘A’ Flight at the Day Fighter Leader School (DFLS), RAF West Raynham in Norfolk, 1955. The DFLS was a school for fighter pilots; ‘A’ Flight had red spines while ‘B’ Flight Had yellow spines and the two flights would practise dogfight tactics against each other.

The Hunter entered service with the RAF in 1954 as an interceptor but as other aircraft of higher speeds and greater performance became available the role changed to that of fighter bomber. As with the Sea Hawk it proved to be a steady weapons platform and it was very popular with other operators around the world not least because it had a long service life and maintenance costs. The majority of export versions were based on the FGA9.

The turnaround of Hunters on operations was very rapid. One feature that enabled this was the interchangeable gun and ammunition boxes that fitted in the nose. The Hunter was armed with four 30mm ADEN cannon with 150 rounds each but instead of feeding belts of cannon shells into the aircraft for each gun, the spent gun boxes were removed and replaced with preloaded ones.

Also the preferred ground attack weapon seemed to be the 18 round Matra rocket pods which were also quick and easy to fit compared to individual rockets. 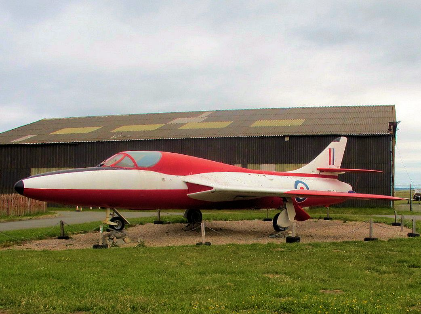 XL618 T.7 is on display outside of the museum at Caernarfon Air World in North Wales

During the Suez Crisis of 1956, Hunters operating out of RAF Akrotiri on Cyprus flew escort to Canberra bombers attacking Egypt. They also flew Combat Air Patrols over Egypt but their low range meant that if they had engaged enemy fighters they wouldn’t have much fuel to be effective in combat.

A State of Emergency declared in Aden at the end of 1963 led to the British giving support to the government there. Among other forces Hunters of 8, 43 and 208 Squadrons provided air support for the Aden Federal Regular Army and British Army units based at Rhadfan. The action was named Operation ‘Nutcracker’.

After some inconclusive skirmishes, the Arab force was withdrawn leaving the British forces to bring order back to Quteibi. From May 1964, Hunters based at Khormaksar flew 314 strike sorties and 115 reconnaissance missions in support of the ground forces. During the two month campaign the Hunters had fired some 2,500 rockets against the rebel forces.

Although the rebels were defeated, sporadic fighting continued for a number of years. Hunters of 43 Squadron responded to requests from the SAS to attack suspected terrorist hideouts. Markers would be dropped by reconnaissance aircraft and, within fifteen minutes, Hunters would destroy the target.

In 1954 India ordered 160 Hunter Mk 56, an export version of the F6 specifically designed for India, for its air force and followed it with an order for some T66 side-by-side trainers. Indian Air Force Hunters were used in the 1961 Annexation of Goa. The rocket-firing Hunters carried out raids on the wireless station at Bambolim and the port at Mormagao.

Hunters were used with success in the two Indo-Pakistani Wars of 1965 and 1970. In the first conflict he Hunter and the Gnat were India’s primary air defence fighters up against Pakistani F-86 Sabres and F-104 Starfighters. The result of the air war is difficult to judge as he claims by either side were wildly different.

In the second conflict of 1971, India had six combat-ready squadrons of Hunters and this time their role was that of fighter bomber. When Pakistani infantry and armour attacked Longewala in north-west India on the border with Pakistan, six Hunters based at nearby Jaisalmer Air Force Base brought the advance to a stop by repeated attacks, the fast turnaround of the Hunters were no doubt a contributory factor to the success of the strikes. The Pakistani forces withdrew and the Hunters wen on the offensive, attacking the Attock Oil Refinery, south of Islamabad, to limit the supply of fuel to the Pakistanis for one.

From 1962 the Fleet Air Arm (FAA) of the Royal Navy took delivery of 40 Hunter GA11s all of which were converted FGA4s from the RAF. They were used for weapons training and to provide fast targets for anti-aircraft training for crews of Royal Navy ships. The guns were removed and they had arrestor hooks. 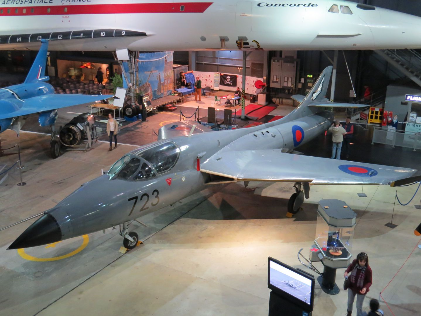 Hunter T8M XL580 at the Fleet Air Arm Museum, Somerset. This unusual specimen has a Sea Harrier nose incorporating a Blue Fox radar and the cockpit was fitted with the appropriate cockpit displays to replicate a Sea Harrier for a variety of testing and training scenarios.

The Black Arrows were an aerobatic demonstration team formed in 1955 by Squadron Leader Roger L Topp, Commanding Officer of 111 Squadron.

The team initially consisted of four Hunter aircraft but was increased to five aircraft from 1956. In 1958, Squadron Leader Peter Latham took over the leadership of the team until 1960 when the team ceased to operate though the squadron continued to operate until it was disbanded in 2011.

The team became famous for their spectacular feats including a world record loop of 22 Hawker Hunters in formation at Farnborough in 1958. This record stands even today. Later the Black Arrows performed the world’s first 16 aircraft barrel role.

The Blue Diamonds were formed in 1960 from No 92 Squadron RAF under the command of Squadron Leader Brian Mercer. It was chosen as Fighter Command's official aerobatic display team, taking over from the Black Arrows.

The squadron operated from RAF Middleton St. George and thrilled the crowds with its precision display including looping a formation of 18 aircraft, only four fewer than the world record of 22 set by the Black Arrows of 111 Squadron in 1958. They continued to perform when they re-equipped with the English Electric Lightning F2 from 1963. 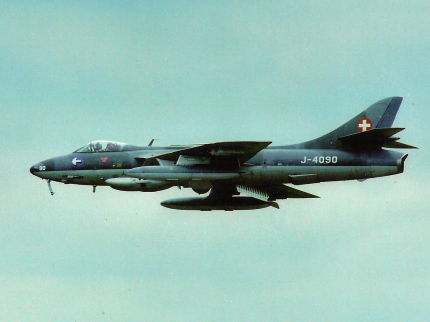 This aircraft was operated by Ray Hanna’s Old Flying Machine Company. It was based at Scampton until Hanna’s death when it was transferred to the Hunter Flying Club (later Hunter Flying Ltd.) at Exeter.

In 2008 the aircraft was exported to Hunter Aviation International Inc, Newark, USA, and registered N330AX. On 6 May 2010 it made an undercarriage retracted landing at Point Mugu, California. There were no injuries.

The company is staffed by a mixture of both highly skilled full-time and part-time staff, as well as enthusiastic volunteers. The company is based at MOD St Athan and undertakes all aspects of servicing and support in the operation of aircraft on behalf of their owners. Currently aircraft types include: Hunter, Jet Provost, Strikemaster, Yak-50, Yak 52 and Aero L-29. Amongst other services they offer flight training and all of these services they make available to both civil and military operators of Hunters worldwide. 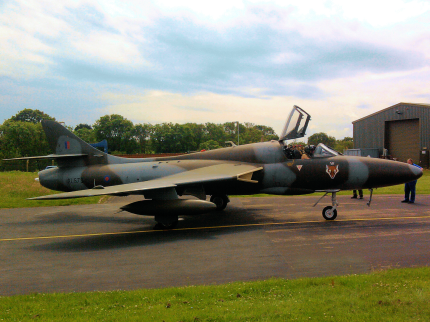 12 Squadron RAF did not fly Hunters operationally but from 1969 to 1993 the squadron was equipped with Buccaneer S2Bs, none of which were trainer variants. A number of Hunter T7s were adapted to house Buccaneer flight instruments for the pilot in the port seat. The seat on the starboard side retained conventional Hunter instruments. These aircraft were designated T7As.

Each squadron equipped with Buccaneers may have had at least one such Hunter on charge as a conversion trainer for Buccaneers. Whether these Hunters ever wore their respective squadron markings is uncertain.

XL573/G-BVGH was built by Hawker Aircraft at Blackpool with construction number HABL-003360 in 1958. It is a two-seat side by side advanced training aircraft powered by a single Rolls-Royce Avon 122 turbojet.

The company also offer pilot training and flight experience courses. The experiences are of various flight durations and include briefings and pre-flight checks. 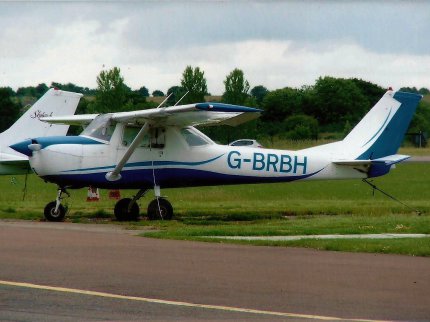 This photo was taken in 2009 at North Weald. HFT acquired the aircraft in 2014 from RAF Henlow. Other aircraft used by HFT include:

I would like to express my personal gratitude to Martin Barnett for providing additional information for this page and for his kind permission to use his photograph of Hunter XL573.