In February 1926 Citroën opened a factory on Liverpool Road on the Slough Trading Estate to avoid the UK purchase tax imposed on imported vehicles. The production line ceased in 1965 and the company’s interests in Britain became dedicated to sales, service and marketing. 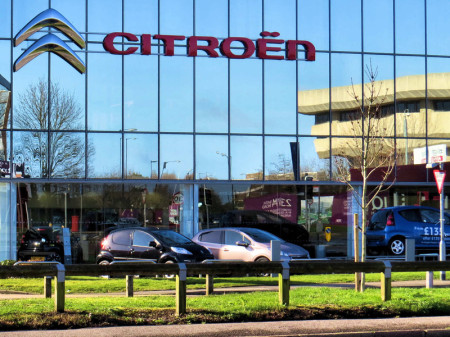 Sadly, The Citroën salesroom on the Bath Road closed in 2014 ending an 88 year association of the company with Slough 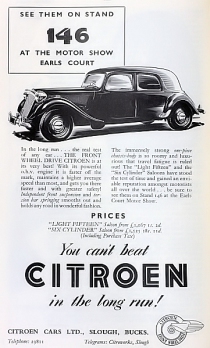 The suspension was also advanced for the day, with independently sprung front wheels and the rear on a beam axle and Panhard rod. Modern cars are fitted with front and rear independent suspension. The 1·9 litre 1951 Avant with engine had a top speed of 73 mph and could accelerate from 0-60 mph in 30 seconds. Fuel consumption was 25 mpg. The 2·866 litre six-cylinder model reached 81 mph and achieved 0-60 mph in 21 seconds. Fuel consumption was 18·6 mpg.

Right-hand drive cars along with a handful of British specification left-hand drive models were assembled at Citroën’s factory in Slough and had to consist of 51% UK components to be exempt from import taxes. By the time production ceased in 1957, 26,400 were built in Slough out of around 760,000 in total. 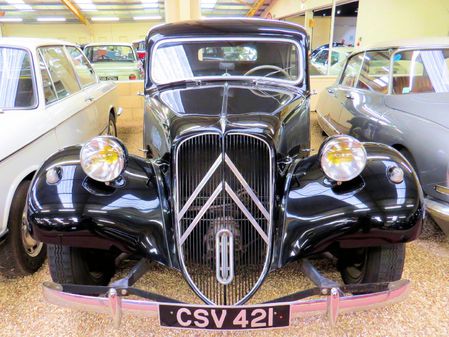 1955 Citroën 11CV at the Haynes Motor Museum. Being left-hand drive it isn’t likely to have been built in Slough.

The Citroën 2CV is a cheap, utilitarian car that was conceived by Pierre Boulanger, Vice President of Citroën, primarily to motorise French farmers. The designation 2CV means

The designation 2CV means deux chevaux-vapeur or ‘two steam-horses’ and was originally powered by a simple air-cooled 9 hp engine. It has suffered critical derision since it was first seen at the 1948 Paris Motor Show but by the end production in Poland in 1990, over 3·8 million 2CVs had been produced along with over 1·2 million Fourgonnettes or van versions. In fact, at the beginning demand was such that a waiting list of three years had developed and it became more expensive to by a second-hand car because there was no waiting list.

Further, the 2CV was part of the A Series of 2CV-derived cars which included the Ami, Dyane, Arcadiane and Mehari and manufacture of this series amounted to a total of over 8·8 million. 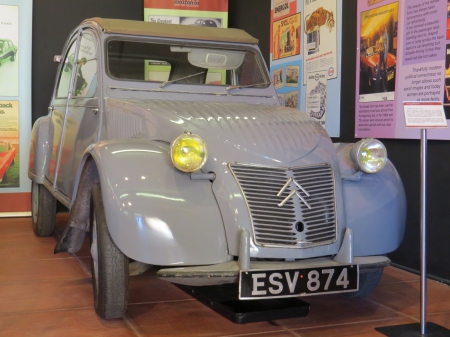 Slough production of the 2CV began in 1953 and was important to Citroën as it gave access to markets in the British Empire and Commonwealth especially Australia and Africa. It wasn’t particularly popular in Britain because there was no market for such a utilitarian car especially as the import duties on component parts made the car relatively expensive.

Another odd production run for the Slough factory began when, in 1957, The Royal Marines identified a need for light ground transport that could be airlifted from aircraft carriers for operations ashore. The Westland Whirlwind naval helicopters of the day had limited lift capacity so a lightweight vehicle had to be developed.

In 1957, Westland Helicopters at Yeovil carried out lift tests using a civilian 2CV pick-up and later the vehicle was taken on board HMS Bulwark for tests during its deployment to the West Indies and the Indian Ocean. HMS Bulwark was converted to a commando carrier and a batch of 35 2CVs built at Citroën’s Slough factory was delivered to serve as transport for 42 Commando Royal Marines. This initial batch was followed by another batch of 30 to serve on HMS Albion which became the navy’s second commando carrier in 1961 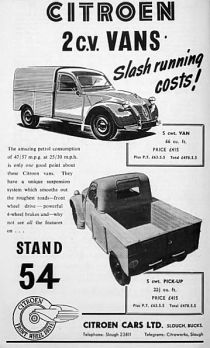 In 1957, Westland Helicopters at Yeovil carried out lift tests using a civilian 2CV pick-up and later the vehicle was taken on board HMS Bulwark for tests during its deployment to the West Indies and the Indian Ocean. HMS Bulwark was converted to a commando carrier and a batch of 35 2CVs built at Citroën’s Slough factory was delivered to serve as transport for 42 Commando Royal Marines. This initial batch was followed by another batch of 30 to serve on HMS Albion which became the navy’s second commando carrier in 1961

The factory assembled the Citroën Bijou, a small coupé based on the 2CV chassis. It was designed specifically for the British market; no left-hand drive models were made, to provide an alternative styling to the utilitarian-looking 2CV. It is notable for its rarity as only 2 prototypes and 207 production models were ever built. However, some 150 in varying conditions are still registered with the 2CVGB club. The car was launched at the London Motor Show in 1959 and production continued until 1964. 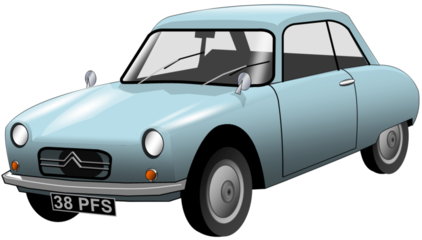 The Bijou had a fibre-glass body and was designed by Peter Kirwan-Taylor, the stylist of the 1957 Lotus Elite. The engine capacity was 425cc producing 12bhp giving the car a top speed of nearly 45mph and could accelerate from 0-40 which it could just about reach in just over 41 seconds. Still, fuel consumption was an impressive 60mpg. Its lack of success was put down to its relatively high price of £674 compared to the Ford Popular which had 4 doors as opposed to 2 on the Bijou, had a 1·172 litre engine giving a top speed of 70mph, and was priced at £494.