During the night of Wednesday 19 to Thursday 20 September 2018, high gusty winds from Storm ‘Ali’ caused a tree to fall into my back garden from an adjacent public park. I estimated the tree to be about 10m tall. 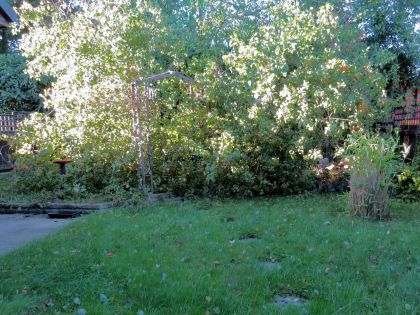 Weather reports suggested that the storm would be closely followed by Storm ‘Bronagh’. As this storm would continue for the next few days into the weekend, I delayed calling the council until the following Monday. I settled in to watch TV and hoped that the aerial would survive the high winds. 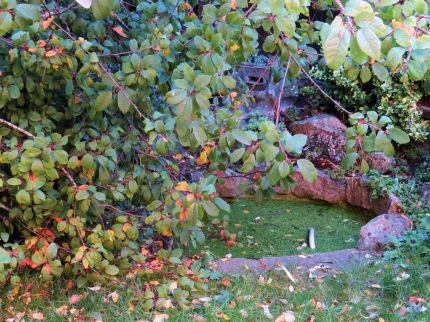 The storm relented on the Sunday and I was relieved to see that my TV worked and the aerial had survived intact. At 10:30 on Monday 24, I phoned Slough Borough Council and spoke to a chap called Gerald in the Parks and Open Spaces department about the fallen tree. I was told that someone would be in touch to inspect the tree and assess the situation.

I expressed my concerns to Gerald about certain features in garden especially the pond of which half was covered by the fallen tree. The pond is 18 inches deep and may pose a safety hazard to any of the crew that might unwittingly step into it. Also there are features of sentimental value such as the bird table which was built by my father over thirty years ago and is irreplaceable. I passed these concerns on to anybody who visited about the job. 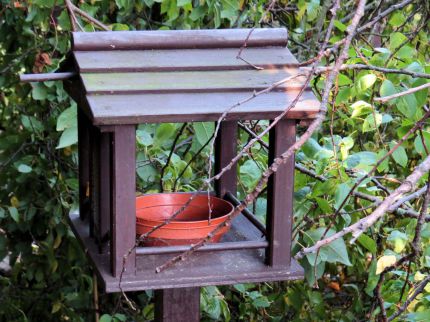 Mark and Graham turned up at about 14:00 that afternoon to assess the situation and said that a team would be round the next morning (Tuesday).

I said ‘I’m astonished. My tree isn’t posing a threat and you must have other priority work.’ Mark replied ‘fallen trees in gardens are always our main priority.’

I asked what kind of tree it was. Mark looked at leaf and the bark and told me that it was a prunus, a kind of cherry. I ripped a piece off so that I could see if I could narrow down the species using the Internet or my personal library. I can’t help it as I feel that I am lacking in my knowledge of trees.

My research on the internet did pull up some very positive matches for this tree which is indeed a species of cherry. The leaves are oval and the edges have fine, sharp serrations. The bark is smooth, peeling and rough, greyish-brown. Twigs are a dull deep brown, with pale markings.

It is a deciduous tree growing up to 16m tall. It is native to northern Europe and northern Asia although the one in my garden was obviously a cultivar grown in a nursery and may have been a sub-species. 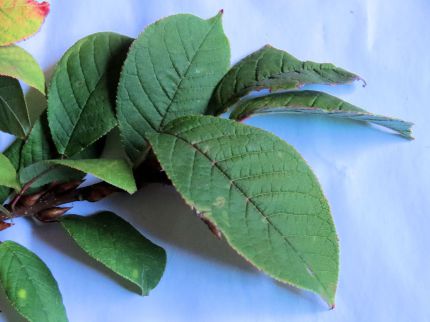 Cherry trees are hermaphrodite, which means that both male and female reproductive parts are contained within the same flower. Flowers appear in April, they are strongly scented, white and with five petals, they measure 8-15mm across. Once pollinated by insects, the flowers develop into reddish-black, bitter cherries.

Parts of the plant, including the leaves, stems and fruits, can be poisonous to some mammals. Birds such as blackbirds and song thrush will eat the fruit and caterpillars eat its leaves. Other names for the bird cherry tree may be hackberry, hagberry, or Mayday tree.

A four man team turned up at my house mid-morning to remove the fallen tree. The leader was a guy named Stuart and I invited him through to see my back garden and the hazard of the pond and the features of sentimental value to me. He assured me that there would be no damage done and the garden would be clean. 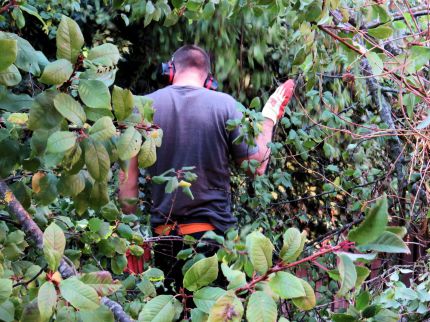 Stuart deciding where to start 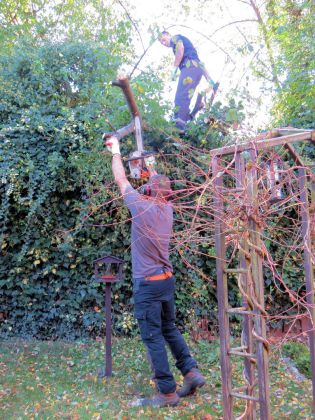 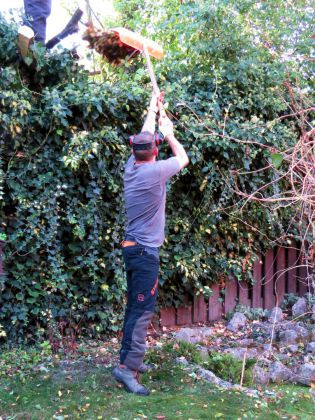 Stuart clearing up and deftly flinging some debris over the fence. For the duration of the operation I could hear the chipper going which was obviously being fed by the other two members of the team. Stuart was continuously passing pruned stuff over the fence and it seemed like a well-organised production line – which it was; they were making wood chippings. 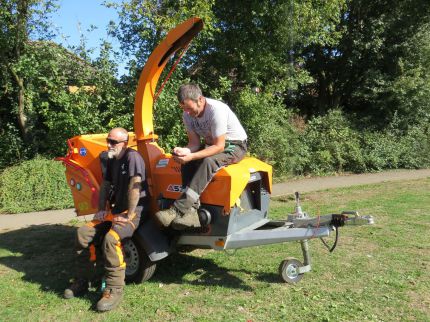 Job done – two of the crew taking a well-earned break 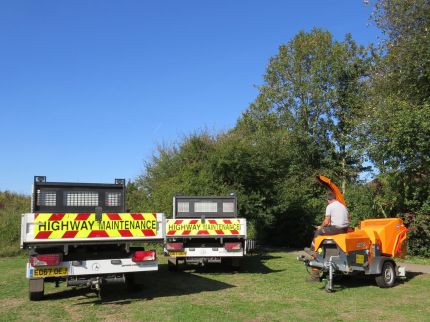 Stuart and his team exceeded his promise that no damage would be done and the garden would be left clean and tidy. When they were finished, the garden was tidier than it had been before the tree had fallen. What impressed me was the sheer speed and efficiency of the team.

I used to be a high voltage electrical fitter working for Southern Electric and I am a veteran of the 1987 and 1990 storms. In both storms trees were falling on overhead lines causing power outages for thousands of consumers.

I wasn’t involved very much in tree clearing, my main roles were providing logistics to overhead line teams, carrying out patrols and in 1990 I was assigned to an overhead line team from Eire, Bord Solathair Leictreias or ESB, Electricity Supply Board, as their guide and logistics support. This is why I particularly appreciated the work done by this team 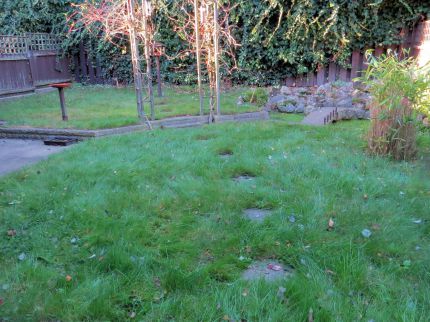 No excuse for not mowing the lawns now