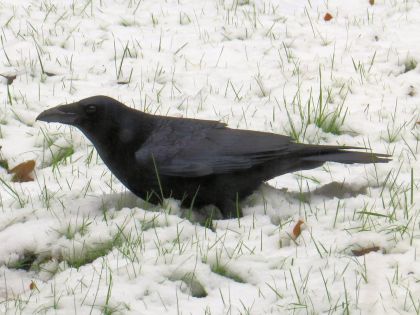 Carrion crow are among the most intelligent and courageous birds in the animal kingdom. They will attack buzzards and other large birds of prey in flight. When competing for food they don’t scrap with other creatures like magpies do. Their mere presence is usually enough to dominate the feeding ground. They are cautious of people but this should be taken as a sign of their intelligence rather than a lack of courage. Crows will not enter any situation if they are uncertain of the outcome.

Carrion crows can be found all year round throughout England, Wales and the south-eastern half of Scotland. They are absent from the whole of Ireland. They are closely related to the hooded crow which can be found in Scotland but is regarded as a separate species. They feed on carrion, insects, worms, seeds, fruit and any scraps. The UK population is expressed as one million territories. 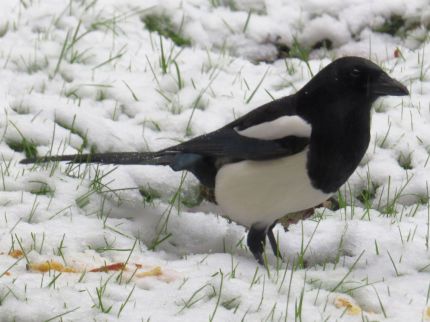 Magpies seem to get a bad press as they are scavengers and predators and, in human eyes, have an arrogant attitude. It’s important not to judge these creatures by false human values. Magpies are survivors because they are intelligent and adaptable. They will scrap with other species for food because they are not as large as carrion crow yet they are large enough to need plenty of food each day.

The colouring may be generally pied, their tails display a blue/green iridescent sheen while their wings have a blue/purple sheen. The noisy chattering calls are distinctive. Magpies can be found all year round throughout England, Wales, Ireland and south-eastern Scotland. They are omnivores and will scavenge. UK breeding is expressed as 600,000 territories. 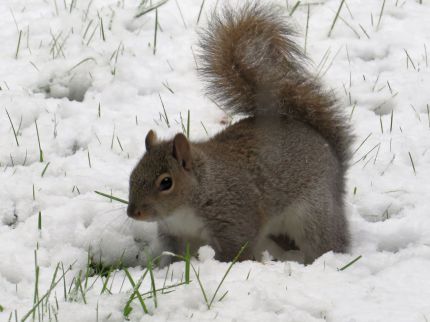 Details on the grey squirrel are covered in Garden Mammals.

Also known in some parts of the world as the rose-ringed parakeet, the ring-necked has very quickly become naturalised to Britain. They began as escapes and deliberately released birds and began to breed at the very end of the 1960s. They have thrived ever since despite the cold climate compared to their native origins perhaps due to a plentiful supply of food.

It is a very distinctive bird with overall green plumage, red beak and long tapering tail, sexes are alike and there are no seasonal changes. It also has a distinctive shrill single note call.

These parakeets will flock and roost into hundreds of birds. Their flight is very direct. They feed on fruit berries and seeds and are considered a pest particularly to orchards. They are currently concentrated in the south-east of England all year round. The UK population is estimated at 8,600 pairs. 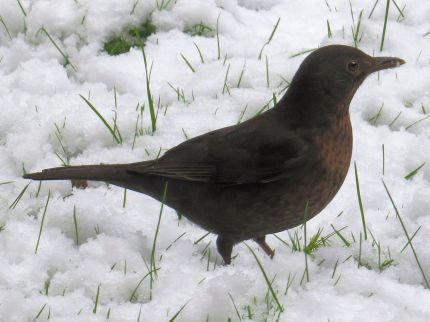 Among Britain’s most widespread birds, the blackbird is very familiar in parks and gardens. The male is black with a yellow beak and yellow ring around its eyes. The female is brown with a speckled chest. Immature blackbirds are similar to females but may have a wide undeveloped beak. The blackbird has a beautifully melodic song.

Blackbirds are present all year round and eat insects, worms, berries and garden scraps. The breeding season lasts from early March to late July depending on the weather. The females builds the nest in good cover and there may be 2 or 3 broods with clutches of 3-5 eggs. The UK breeding population is estimated at over 5,000,000 pairs 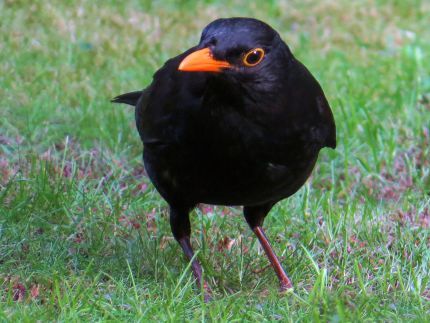 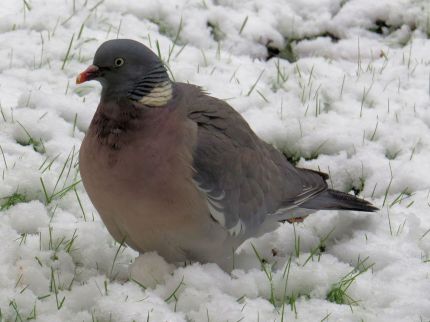 The woodpigeon is Britain’s largest and commonest pigeon. In the countryside the woodpigeon is cautious but in towns it becomes used to contact with humans. It has a familiar cooing call and the clattering sound of its wings as it flies away suddenly disturbed.

Woodpigeons feed on Crops like cabbages, sprouts, peas and grain. Also buds, shoots, seeds, nuts and berries. Woodpigeons are present all year throughout the British Isles. The UK breeding population is estimated at 5,400,000 pairs. 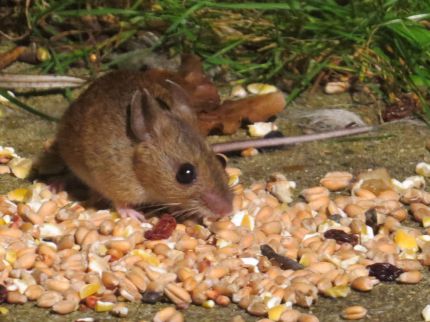 The snow photographs on this page were taken on 10 December 2017. The snow melted the following day but the temperature plummeted during the night. Small creatures suffer in cold temperatures because they don’t have fat reserves and don’t have sufficient fur or feather covering to keep them warm. Small birds will find a hole of some sort and snuggle to share their bodily warmth at night. This poor creature has to endure the cold to forage for food at night just as the temperature is coldest as he or she must avoid daytime predators. The least I can do is leave something to eat. The photo was taken at 22:00 and is illuminated by my garden floodlight. There are more details about the wood mouse on the Garden Mammals page.

When to put food out for birds

Adult blue tits feed on seeds, nuts and insects but seeds and nuts are indigestible to chicks and fledglings so some people are under the mistaken idea that we should stop feeding birds in springtime.

In May 2014 I conducted my own study on the pair of blue tits mentioned earlier with particular interest in their visits to and from the nest box to feed their young.

The rate of feeding by both adults combined varied from about 30 to 40 visits per minute. Each time they left the bird box to gather food they would visit the peanut feeder first to keep their own energy high. Then they go to the trees beyond my back fence to forage for insects to take back to the nest to feed their young. They never took nuts back to the nest.

The length of time that the nest box was left by both adults was between 1min 20sec to 1min 40sec so each bird had about 2min 40sec to 3min 20sec away from the nest. The synchronisation of the adult’s visits was very good. The answer is if you enjoy feeding garden birds go ahead, the birds know instinctively what to feed their young.