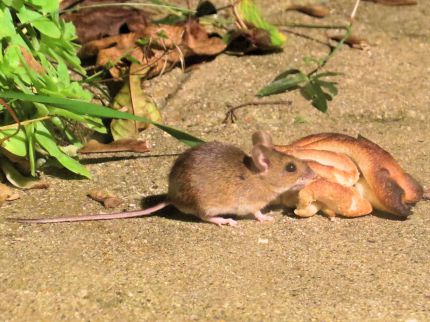 The wood mouse, also known as the field mouse, is from the family Muridae. Their natural habitats are cultivated farmland, forests, open grasslands… actually anywhere in the great outdoors really. Unlike the house mouse (mus musculus), they tend not to like being indoors but they will come in in very cold conditions.

Wood mice feed mainly on seeds and will take food back to their nests for storage. They are mostly nocturnal and the wood mouse in the photograph was taken at night illuminated by a halogen light. 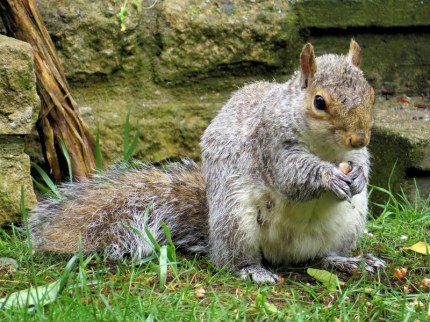 Grey squirrels were released by UK landowners in the 19th century and are now common and widespread. They have replaced native red squirrels almost everywhere except some islands such as Anglesey, Brownsea and the Isle of Wight. Squirrels nest in a drey which consists of twigs, leaves and bark and breed in early spring but may have another litter in the summer if conditions are favourable. 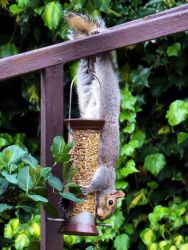 Squirrels eat acorns, bulbs, fungi, windfall fruit and food left for birds such as peanuts and seeds. A grey squirrel visiting my garden recently, hung down on its back legs from the arch and lifted a seed feeder off its hook to let it fall to the ground so that some of its contents would spill out. The feeder was full and weighed nearly a kilogram, one and a half its own body weight. 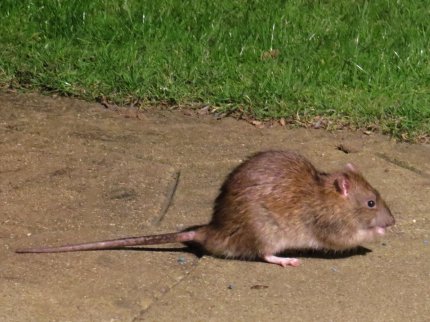 The brown rat is the most successful mammal in the world in terms of distribution second only to humans. It is absent only from Antarctica and the far north of Russia and Canada. Rats are considered as pests that are filthy and spread disease.

Where food and shelter are abundant a female can produce five litters a year and this could total fifty young each year. There are predators such as cats, owls and foxes to help control numbers and there are also poisons. Rats have become immune to some of these poisons however, and it is important not to over use them and try to limit the effect of the poisons on other wildlife.

Rats are unwelcome visitors and if you see a rat in your garden you should stop putting food out for the birds and empty any nut feeders or bring them indoors. Buy some rat poison. I use Nippon Rat and Mouse Killer. This comprises of sachets of some pink material which rats seem to find irresistible. Follow the instructions and observe the rat or rats if you can. I put the poison out at night and any that is left in the morning, I reclaim careful not to touch the sachets. This is to protect daytime feeders such as birds. If the sachets are all gone by the morning you may still have a problem. If there are any sachets left, the rat problem has probably receded and you can resume feeding the birds. Just remain vigilant.

Another point is that you may have wood mice, aka field mice, visiting your garden as described earlier in this article. Wood mice visit my garden and they are most welcome to me as they are cute and harmless. I was worried that they might eat the poison but they ignore it. I imagine that the poison is designed to be attractive to carnivores such as rats, so the seed-eating wood mice are not interested in the poison and therefore safe.

I have also observed that rats do not climb to the bird feeders on my arch no do they visit the areas underneath where there is always the spoils of untidy birds feeding on peanuts, mixed bird seed or nyjer seed. I like to provide food for birds because as a human being I have personally taken so much natural space with my home, I feel it is important to give something back.

This article are based on research as well as my personal observations and experiences.