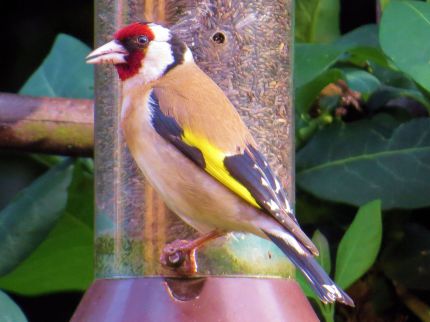 This finch is a real treat to observe in the garden. Not only is it beautiful, it also has a gentle lilting song. Young goldfinches have the golden wing patches but their heads are a kind of tawny grey, lacking the stunning black, white and red of the adults.

Using their long fine beaks they feed on seeds from thistles and teasels. They will also eat insects. The finch in the photo is feeding on nyjer seed in a feeder specifically designed for goldfinches. 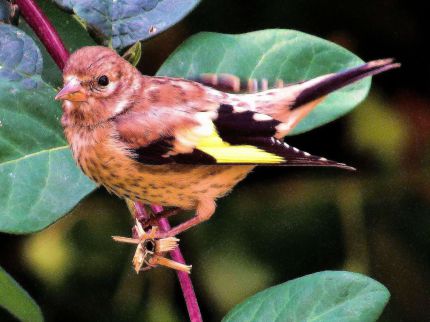 An immature goldfinch in July

Goldfinches belong to the family Fringillidae. They are quite common and can be seen all year round. Investing in a feeder may attract them but it depends on the surrounding environment. They like parks, heathland and commons that have plenty of bushes and trees. 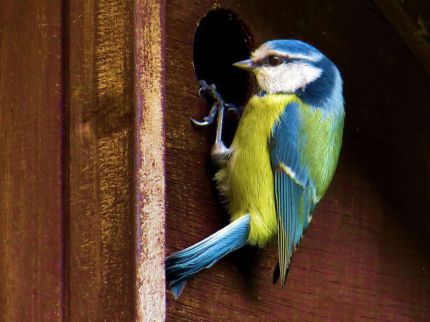 Belonging to the family Paridae, blue tits are familiar garden birds in Britain and are widespread in the UK throughout the year. They are easy to observe and in April 2014, I observed a pair of blue tits that had stated started taking an interest in one of my nest boxes.

They had a clutch of youngsters and by the end of May the chicks had fledged so I removed the nest from the box. It was made of moss, grass and hair cuttings and was very clean with no droppings. 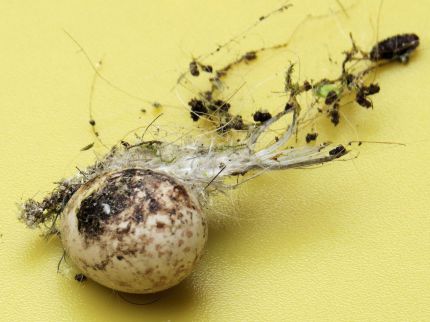 Sadly this egg was unsuccessful and still born

Winter blue tit numbers peak at around 15 million and the UK breeding population is estimated at 1,600,000 territories

Great tits are passerines of the family Paridae. They are the most widespread of the tit family and are common throughout Europe, central and northern Asia, and some parts of northern Africa. The great tit is mostly insectivorous in the summer, but will eat a wide range of food in the winter months. They live in a variety of habitats the most common being deciduous woodland, forest edges and gardens. It is not normally migratory but may move south in harsher winters. 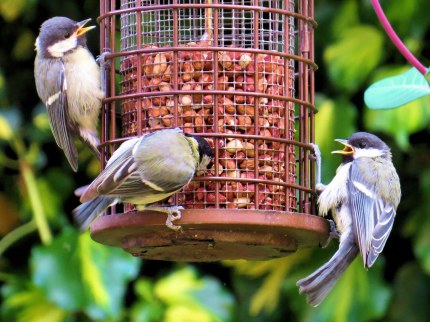 Great tits usually nest in a hole in a tree or a nest box so long as it is well positioned. The female lays a clutch of about 12 eggs and incubates them alone while the male bring food to her. Usually there are two broods in a year. As with blue tits both parents share the feeding of the fledglings. 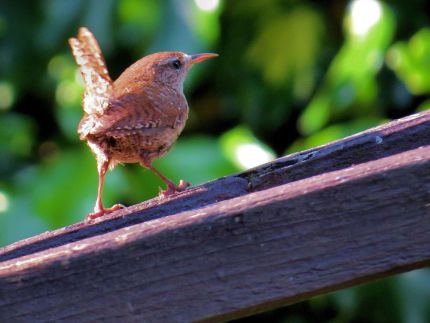 The wren is a tiny dumpy brown bird. For its size it has quite long legs and toes. Its wings are very short and rounded and has a narrow tail which is usually cocked up. It has a remarkably loud repetitive song which seems to be a proclamation of territory as well as to attract a mate. 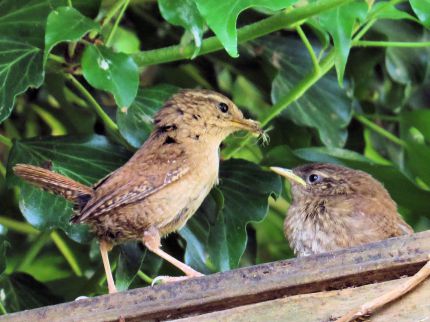 A wren feeding one of its young

Wren are found across Britain in a wide variety of habitats and is a regular visitor to most gardens. It has a fine bill in common with other insectivores and indeed its preferred diet is insects and spiders. It is the commonest UK breeding bird with an estimated 8,600,000 territories, although it suffers declines during prolonged cold winters. Wrens have two broods each season which is April-July, consisting of 5 or 6 eggs. 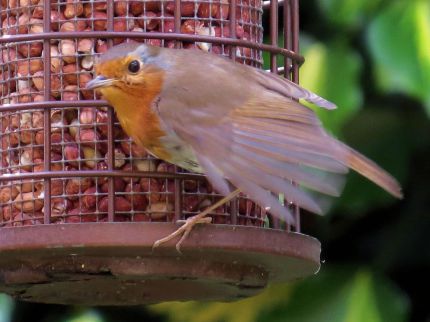 Often regarded as Britain’s favourite bird, the robin is very familiar throughout the year especially in parks and gardens. Males and females are similar having brown upperparts and a chestnut orange breast. Young birds have no red breast and are speckled with golden brown. Robins sing nearly all year round and despite their apparent friendliness to humans, they are aggressively territorial.

The breeding season is April-August and robins will usually have two broods of 4-6 eggs. Incubation is by the female only and takes about 13 days. The chicks hatch naked, and are totally dependent on their parents for food and warmth. Both parents now look after the nestlings. The chicks fledge at 14 days but will not be able to fly for another couple of days. The UK breeding population is estimated at 6,700,000 territories. Robins eat worms, seeds, fruit and insects.

I have an open-fronted nest box hidden in ivy on my back fence which has been used successfully in the past. 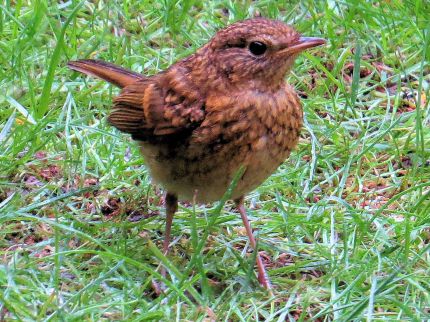 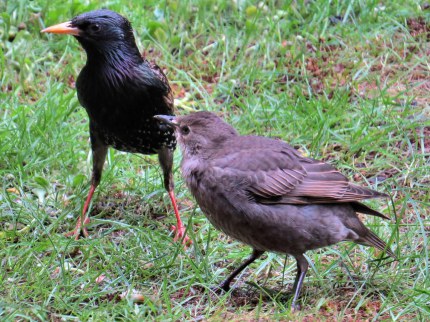 An adult with an immature starling

Although starlings are still familiar in gardens, their numbers have been in decline in some other habitats across Britain. With the onset of autumn starling numbers are boosted by visitors from Eastern Europe. A flock of starlings is known as a murmuration and these huge numbers swirl spectacularly and confusingly. They then may gather on power lines before roosting in shrubs and trees.

Starlings eat insects and fruit. They will squabble noisily over garden scraps while smaller birds such as sparrows quietly steal the food from under their beaks. The UK breeding population is estimated at over 800,000 territories. 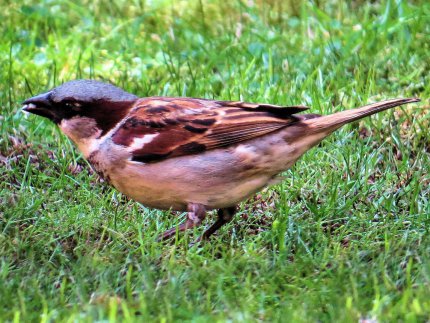 House sparrows are noisy and gregarious and very familiar in gardens taking scraps. Their natural food is seeds. House sparrows are widely distributed even throughout most of the world but parts of Britain have seen a serious decline. Between 1977 and 2008, the UK saw an estimated drop of 71%.

The main nesting season is from April to August and two or three clutches of 2-5 eggs are laid. Both sexes incubate, and the chicks hatch after 11-14 days. Chicks are brooded for 6-8 days and are fed on a variety of invertebrates such as aphids, caterpillars, beetles and grasshoppers. The young fledge 14-16 days after hatching. They are unable to feed themselves for about a week after leaving the nest and are cared for by their parents for around a fortnight.

House sparrows are present all year round and the UK population is estimated at 5,300,000 pairs. 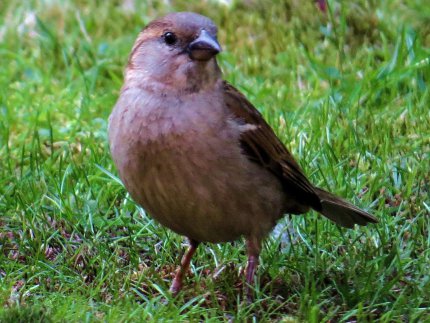 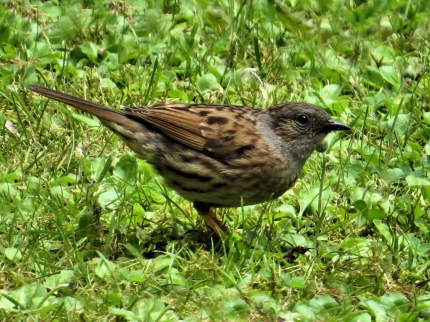 Dunnocks, also known as hedge sparrows, are small unobtrusive brown and grey bird. Often seen on its own, creeping around shrubs they never visit a bird table or a nut feeder but will feed underneath on overspill.

The UK breeding population is estimated at 2,300,000 territories. Their natural habitats are woodland, farmland,parks and gardens. Dunnocks eat insects, spiders, worms and seeds. 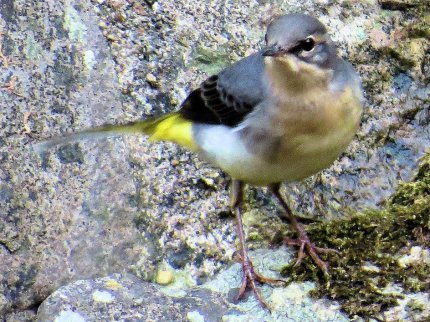 Grey wagtails have gradually increased their range in the past 150 years and have expanded into the English lowlands from the northern and western uplands.

Grey wagtails prefer to live near water and areas as this is where their insects are abundant and grey wagtails, with their short thin bills, are exclusively insectivores. The number of UK breeding population is estimated at 38,000 pairs. 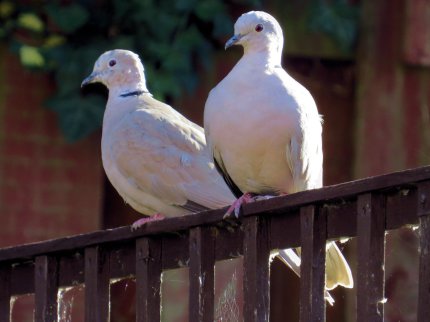 Collared doves are a pale, pinky-brown grey colour and have a distinctive black neck collar. Their eyes are deep red eyes and they have reddish feet. Their call is a monotonous cooing. Often seen in pairs, flocks may form where there is a lot of food available. Collared doves are found in a number of habitats including farmland, parks and gardens.

Collared doves came to the UK in the 1950s, after a rapid spread across Europe from the Middle East. The UK breeding population is estimated at 990,000 pairs. Collared doves feed on seeds, grains, buds and shoots. 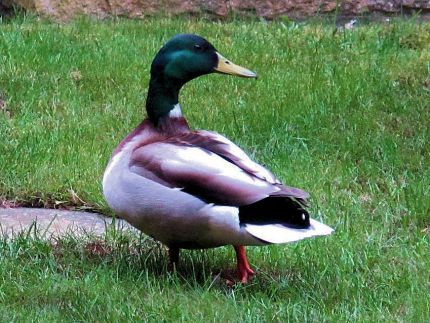 This handsome mallard looked as surprised to be in my little garden as I was to see him. Mallard are dabbling ducks and are much more at home on a river or a lake. He wandered around for half an hour or so before deciding to find his way home.

They feed on the banks of rivers and lakes on seeds, acorns, berries. On the water near the surface on plant material, insects and shellfish. Sometimes they will upend to get deeper.

The female is mainly speckled brown with a yellow bill and has purple speculum. Mallards in the UK are resident breeders or migrants with many of the birds that breed in Iceland and northern Europe coming to spend the winter in Britain.

The chicks leave the nest within 24 hours of hatching and can swim and feed themselves. They stay close to their mother and if threatened the mother will create a diversion by splashing about, feigning an injured bird, while the chicks scatter and hide. The clutch may number 10-14 eggs. 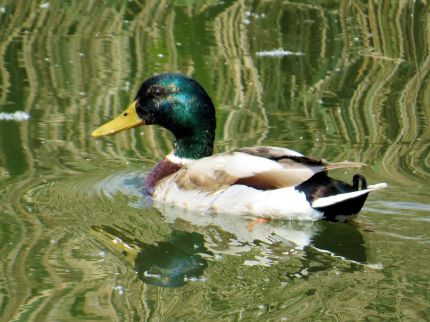 A mallard in a more natural setting – on water

At the end of the breeding season the males moult into eclipse plumage and look similar to the females. They are flightless for about two weeks then their full colour breeding plumage returns. The UK breeding population is estimated at 70,000-140,000 pairs. In the winter the population may swell to over 700,000 birds that come here from Iceland and Northern Europe.