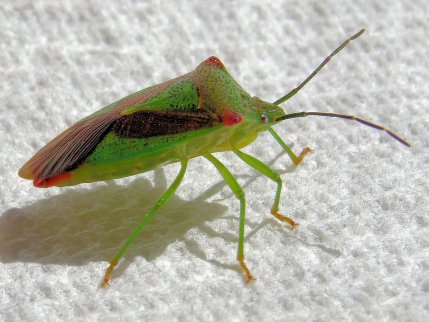 This is a common European shield or stink bug which mostly eats haws, the fruit of the hawthorn tree. Adults will overwinter on leaves and some are found on potential food plants, including oaks and whitebeam. They are coloured n shades of green and brown. Stink bugs may release unpleasant odours when disturbed. 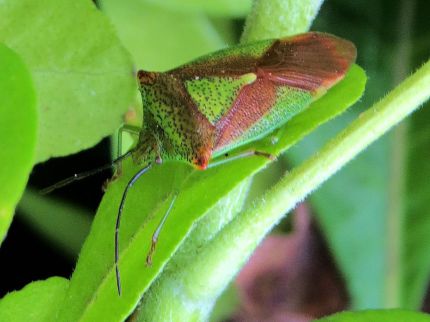 A hawthorn shield bug in a more natural setting; among choisya cuttings in my wheelie bin. There was a breeze so how else could I stop the leaves moving? I did transfer the bug back to the shrub once I got the shot.

The hawthorn shield bug is found across mainland Europe and is common in southern parts of Britain. Its distribution appears to be spreading north. In Britain and North Western Europe the species is generally active between the months of April and October, although some can revive from hibernation during periods of unseasonable warm weather during the winter.

The 10-spot is a very common small ladybird in Britain. Newly hatched specimens may take a while to develop the orange-red background colour and may be pale brown for some time. Confusingly the 10 spot can have anything from 0-15 spots. 10-spots live in woodland and gardens with trees or shrubs such as ivy. 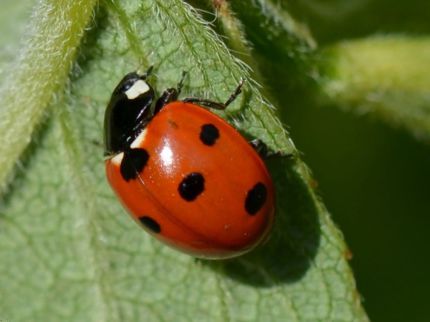 10 spot ladybirds are carnivorous and their preferred food is aphids which are pests in gardens, agricultural fields and orchards etc. In controlling pests they are more effective and environmentally friendly than poisonous chemicals. It is possible to buy packs of live ladybirds for pest control on the Internet. At the time of writing 50 ladybirds cost £30. The distributors claim that ladybirds eat up to 5,000 aphids in their lifetime. Ladybirds lay up to 50 eggs a day which of course hatch and another generation of larvae continue hunting aphids.

10 spot ladybirds prefer trees such as sycamore, deciduous, conifers, and also scrub, wetlands, grasslands and even coastal areas such as dunes. They are active from March until October. Over wintering 10 spots may be found in leaf litter and other plant debris. 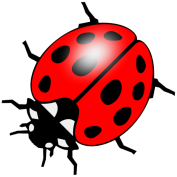 Americans refer to these creatures as ‘ladybugs’, but a more accurate name might be ‘lady beetle’ and indeed some people do refer to it in this way. The 10 spot ladybird, Adalia decempunctata, has become the symbol of Postcards from Slough. To learn how the 10 spot became the symbol and how the website came into being, please click on the ladybird. 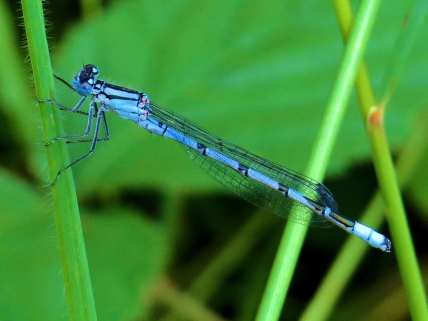 Probably the most common damselfly in Britain, the common blue will typically fly low through reeds and often well out over water. They are fairly easy to approach unlike the similar azure damselflies which have slightly different markings; in particular they have two black stripes on each side of the abdomen as opposed to one on the common blue. Incidentally, damselflies differ from dragonflies as they hold their wings folded at rest, whereas dragonflies hold their wings open.

If you have a pond, stick some lengths of bamboo into the bank at angles of about 45° to provide resting posts for dragonflies and damselflies. 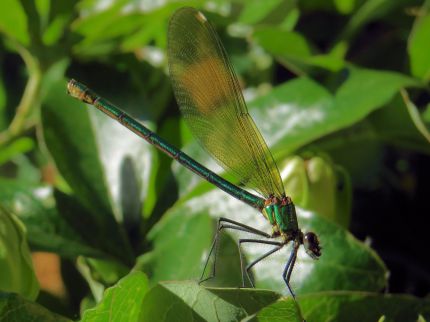 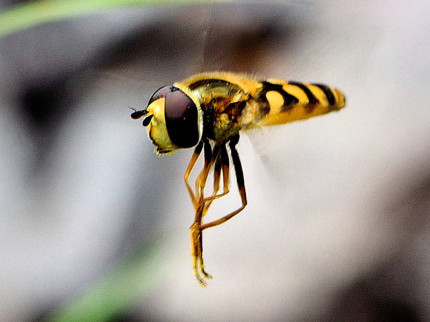 Hoverflies make up the insect family Syrphidae They are common throughout the world, found on all continents except Antarctica, and some 6,000 species in 200 genera have been described. In spite of their colour and patterns that are similar to wasps and bees etc, hoverflies have no sting and are harmless to humans.

With so many species of hoverfly, UK number is put at over 280, identifying different species is very difficult especially for an amateur like me.

Consider the two shown here. For a start their aristas; the short antenna-like projections between the eyes, are different colours. Aristas used  to determine changes in environmental temperature and humidity. Their legs are different colours and their abdomens are different shpaes. These observations are based entirely on looking at these two still photographs and not a field study which might reveal slightly different behaviours for example. 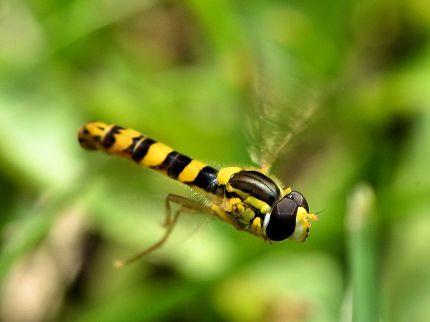 The adults of many species feed mainly on nectar and pollen hovering at flower head. The larvae eat a wide range of foods. Some species the larvae are saprotrophs and eat decaying plant and animal matter in the soil or in ponds and streams. Larvae of other species are insectivores and prey on aphids and other small plant-sucking insects. 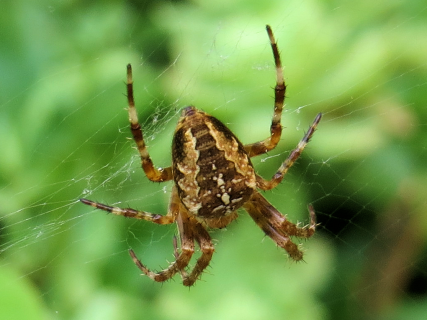 Named for the cross mark on its abdomen, the garden cross spider uses its third pair of legs to assist the spinning orb webs. The larger female spins the web and is quite passive as it waits for small flying insects to become entangled in the silky threads. When this happens the spider quickly catches its prey and wraps it in silk before devouring it.

These spiders eat the web each day along with the entangled insects, and spin a new one the following morning. During mating the male approaches the female with caution as she might instinctively attack and eat him as prey. Spiders are not insects but belong to the class Arachnids. 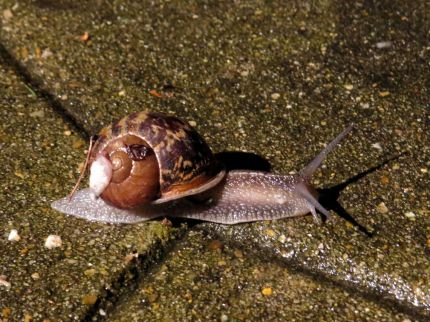 Cornu aspersum is a land snail native to Western Europe and the Mediterranean area. Human activity, whether by design or by accident, has spread it to temperate and subtropical areas worldwide. Some peoples relish it delicacy while others regard it as a garden and agricultural pest.

It was classified as helix aspersa for over two centuries until it was reclassified in more recent times. Adults develop a hard, thin calcareous (calcium carbonate) shell 25–40mm in diameter and 25–35mm high, with four or five whorls. The colouring of the shell is variable but generally it has a regular pattern of dark brown, brownish-golden, or chestnut. The entrance is large.

The body is soft and slimy, brownish-grey and the animal retracts itself entirely into the shell when inactive or threatened. Unlike sea and freshwater snails, the garden snail has no operculum or ‘trap door’. During dry or cold weather it seals the aperture of the shell with a thin membrane of dried mucus. This membrane helps the snail retain moisture and protects it from small predators. 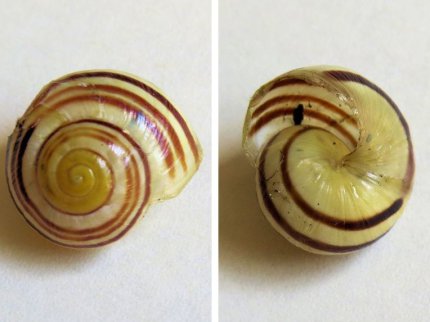 The overall colour of the white-lipped snail can vary widely but it always has a white lip to the opening of its shell. It is a common and widespread snail and prefers damp spots in wide range of habitats, from gardens, grasslands, hedges, woods and even sand dunes and can be found all year round. The preferred food of the white-lipped snail is nettles, ragwort and hogweed.

The shell size generally varies from 16mm to 22mm. 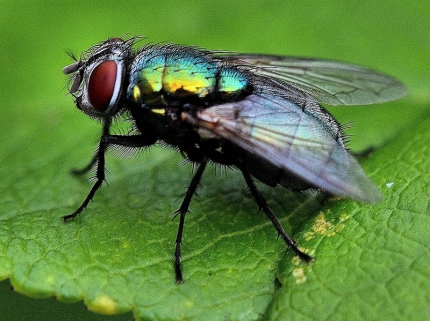 Slightly larger than a housefly, the bluebottle is a kind of blow-fly. Their larvae feed on decomposing matter for a few days then find a dry place to pupate. After two or three weeks they emerge as adults. The adults feed on nectar.