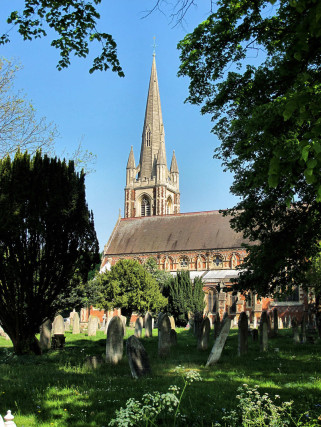 St Mary’s Church from the south-east

St Mary’s is a red brick grade II* listed church built in the Gothic style. It was designed by John Oldrid Scott and funded in part by Queen Victoria. Construction began in 1876 and completed in 1878 with further additions in 1911-1913. The walls and gates of the church yard are grade II listed features.

In 1876 a new chancel, transepts and vestry were added. A new nave was completed in 1912 and the following year the spire was rebuilt. 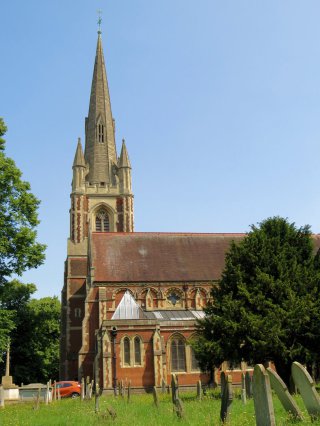 St Mary’s from the south

The exterior is of red brick and stone dressings around windows and other features. The pitched roofs are tiled and the aisle roofs are made of lead.

The spire rises to a total height of 178ft (54m) and is thought to be the last in England to be built of stone. The tower houses ten bells with the tenor weighing 17½ cwt.  The original bells were cast in 1619 by Richard Eldridge but only one survives. The nine replacement bells were cast by the Whitechapel Bell Foundry. 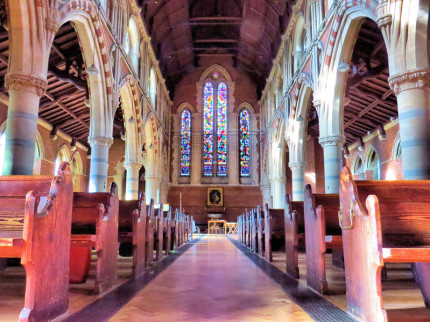 View from the nave of the highly acclaimed abstract west window designed by Alfred A Wolmark. It was funded by Miss Mary Elliman and constructed by Arthur J Dix in 1914. 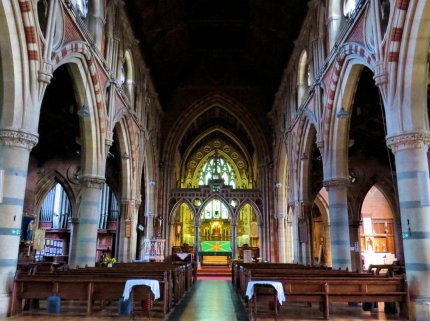 View of the chancel from the nave. The five lights of the window depict Christ and twelve apostles. It was constructed in 1889 by CE Kempe. 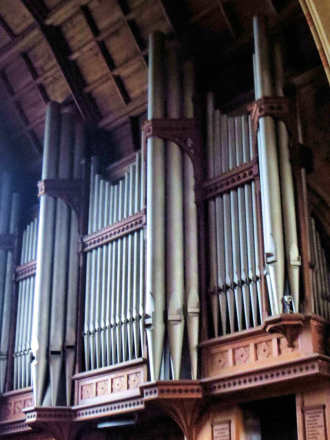 The church contains a pipe organ built in 1912 by Norman and Beard. It features three manuals, 46 stops, of which 37 are speaking and over 2,400 pipes.

The grade II listed war memorial near the west main door of the church carries the names of 316 dead Slough service personnel from the two world wars. 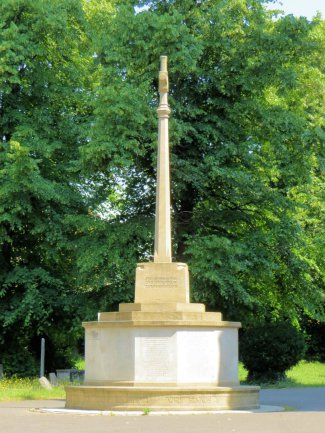 One name is that of a woman; Nurse Vera L Carter

Nurse Vera Lorance Carter served with the British Red Cross Society, Bucks 44th Detachment. She died at home on 12 July 1918 aged 30 and was buried in St Mary’s cemetery on 20July 1918. Cause of death is unknown to Postcards from Slough and if anyone can help please use the contact tab.

St Mary’s is one of three churches within the Upton-cum-Chalvey parish. The other two are St Laurence’s in Upton, the resting place of astronomer Sir William Herschel and St Peter’s in Chalvey.