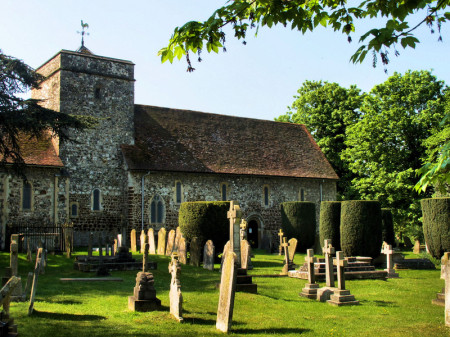 St Laurence’s Church is the oldest building in Slough. The nave and tower appear to date from the early 12th century. By about 1160 the nave was lengthened and the chancel was added or rebuilt. The building had become quite dilapidated by around 1835 and the new church of St Mary’s was built to replace it in 1876-1878.

A local man named Mr Pocock gave £50 to the parish to keep St Laurence standing and later Edward Jesse, Surveyor of Her Majesty’s Woods and Forests began an appeal for the restoration. The church was re-consecrated in December 1851. In 1879 the vestry and organ chamber were added. 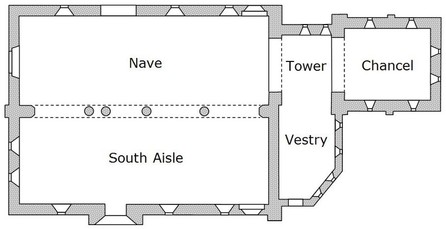 The font has a 12th century circular bowl standing on a more modern stem and base. An 18in tall alabaster representation of the Holy Trinity possibly dating from the 15th century is placed in a niche in the tower.

The church and its graveyard are the final resting place for several locally significant people. Sir William Herschel is entombed within the church; Dickens’ publisher Richard Bentley and other members of his family are entombed outside the north wall of the church and artist Henrietta Ward is buried outside the west wall of the building. Edward Bulstrode, Sheriff of Buckinghamshire was also laid to rest here.

There are memorial brasses depicting Edward Bulstrode (1550-1598). He is shown wearing plate armour along with his wife Cecilia Bulstrode née Croke and their ten children. Bulstrode was born in Upton and was admitted to the Inner Temple 1573-74 and appointed Sheriff of Buckinghamshire from 1576 to 1584. When he died he was buried in St Lawrence’s Church. 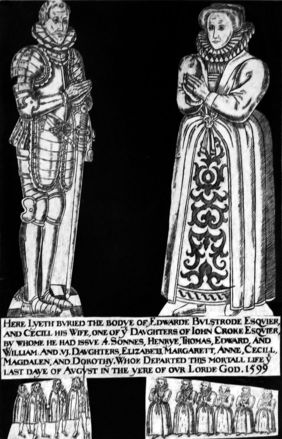 This image is a photograph of the brass rubbings of Edward Bulstrode and his family taken from the original brasses that are displayed on the adjacent wall. The image is greyscale with the black and white reversed. 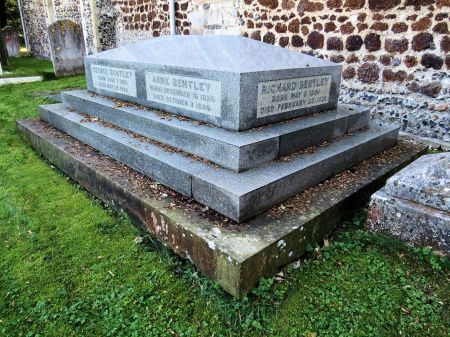 The astronomer Sir William Herschel was laid to rest at St Laurence’s Church on 7th September 1822. In the late 1990s a bequest of £10,000 from Miss Nora Cruikshank led to the commissioning of the Herschel Window. Designed by Andrew Taylor, the beautiful stained glass window depicts the sun, moon and the planets that were known in his lifetime and in the order in which they were discovered. Herschel is also shown using his telescope. 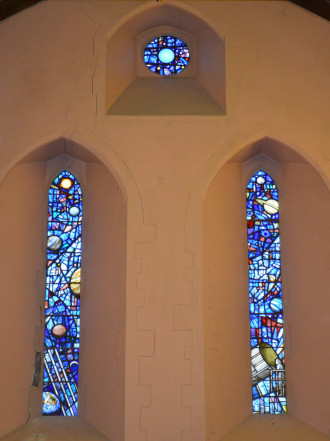 The lights do not include Pluto and some think this was because of the downgrading of the object to minor planet status by the International Astronomical Union (IAU) in late 2006. The three lights were designed and built in 2001, some five years after Pluto was downgraded. A more likely explanation for the omission is that it was not known of by Herschel in his lifetime. 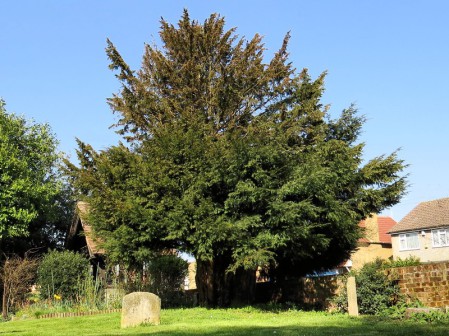 This yew tree in St Laurence’s Churchyard has been estimated to be at least 600 years old. The tree was severely damaged by a storm in the 1980s but has managed to survive. The lightning strike explains its rather squat shape.

St Laurence’s is one of three churches within the Upton-cum-Chalvey parish. The other two are: St Mary’s in Slough Town Centre, noted for its fine stained glass window in the west wing; and St Peter’s in Chalvey, noted for remembering a soldier who won a Victoria Cross during the First World War on its memorial.