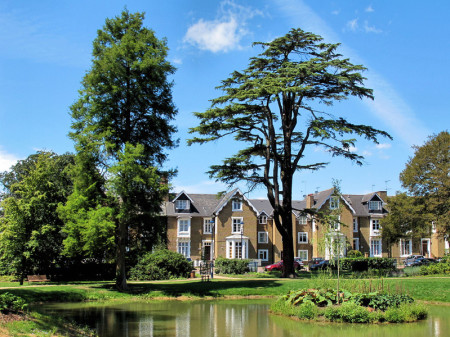 The East Villas of Upton Park from Herschel Park

Upton Park Estate included the 7·8 acre Upton Park. Created in 1842, the park was bought by Slough Borough Council in 1949 and renamed Herschel Park after the astronomer Sir William Herschel. An area of some 11·3 acres area to the south-east of the park was added in 1982 and is managed as a nature reserve.

In 2002, Herschel Park gained Grade II listing in the English Heritage Register of Parks and Gardens of Special Historic Interest. It had become neglected however; the lake had dried up due to the lowering of the local water table and drying up of the natural springs that fed it. A grant of 2·7 million from the Heritage Lottery Fund along with support from the Friends of Herschel Park and hundreds of hours of work from volunteers has restored the park to its former glory. 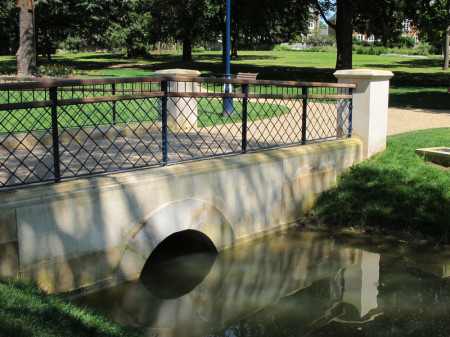 The lake was lined with clay and is fed from a borehole that provides sustainable water. New paths following the original routes have been laid and Victorian-style lampposts have been installed. The park has new perimeter fencing and gates, and hundreds of new trees and shrubs have been planted in an informal fashion. It is a tranquil enclave close to the town centre, the peace being aided by a landfill mound separates it from the noise of the motorway to the south.

Amenities  include a refreshments kiosk open in spring and summer, toilets including disabled, plenty of benches to sit on and a car park for about a dozen cars at the eastern end of the nature reserve. Cycling is permitted on the path that runs along the south side of the park and north side of the reserve. 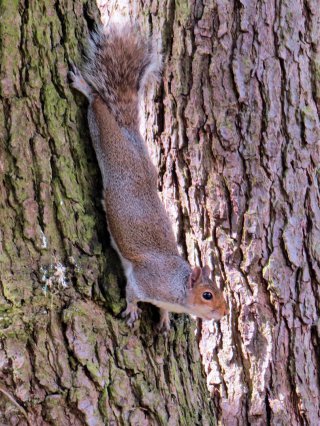 The park has an arboretum planted during its first construction in the Victorian era. Some trees in the park and reserve have boxes attached to their trunks for various species of birds and bats. The pond is in two parts, each with an island providing sanctuaries for water birds such as ducks, coots and Egyptian geese.

Snowdrops are bulbous perennial herbaceous plants. The scientific name Galanthus comes from the Greek gála meaning ‘milk’ and ánthos meaning ‘flower’. There are about 20 species within the genus. They are characterised by having pendulous white flowers on a short stem with two leaves. 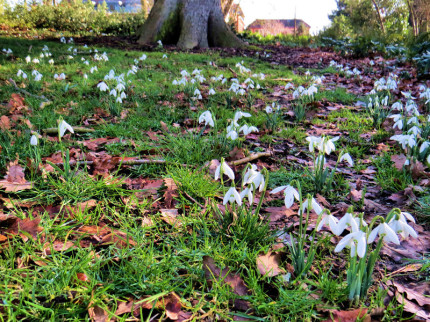 Galanthus is native to Europe and the Middle East and has been introduced as an ornamental species in North America, subsequently naturalising on that continent. Galanthus nivalis is the most widespread and grows best in woodland, in acid or alkaline soil.

Forget me not (Myosotis - )

The scientific name Myosotis comes from the Greek and means ‘mouse’s ear’ and refers to the shape of the leaf. The common name comes from the German Vergissmeinnicht and was first used in English in the late 14th century. 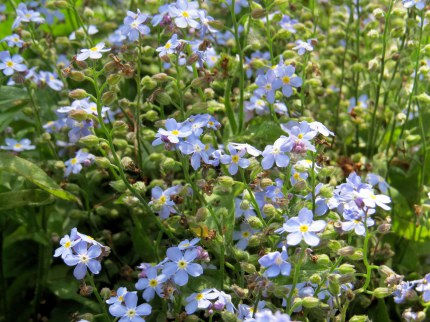 There are 74 known accepted species of Myosotis worldwide. In Britain the flowers appear in spring. The flowers are typically 1cm diameter and are usually blue with yellow centres but pink, white and yellow flowers can occur even on the same inflorence.

Forget me nots can mostly be found in the nature reserve area of the park.

Poppies grow in open grassland and as weeds in farm fields. Before herbicides were used it was often mistaken for a crop but the only species to be grown deliberately is the opium poppy, papaver somniferum. 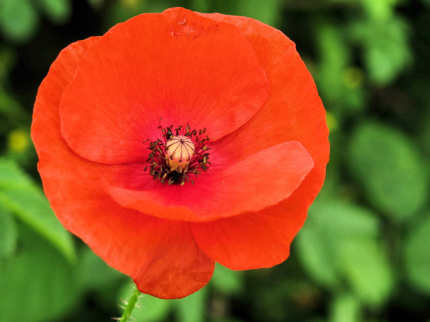 Papaver rhoeas grows up to about 70cm tall with flowers of 5-10cm diameter appearing in late spring. The four petals overlap and are deep orange to red in colour. They have a black spot with yellow stamens in the middle.

Since World War One the flower has become a symbol for servicemen who died in that conflict as well as in other conflicts since. Poppies grew in the disturbed soil of no man’s land on the Western front and feature in the poem In Flanders Fields written by Canadian Lieutenant Colonel John McCrae.

Poppies can mostly be found in the nature reserve area of the park.

Herons are tall, with long legs, a long neck, a long beak which yellow underneath and dark grey on top. Their plumage is grey, black and white. Their legs are generally yellow/pinkish. 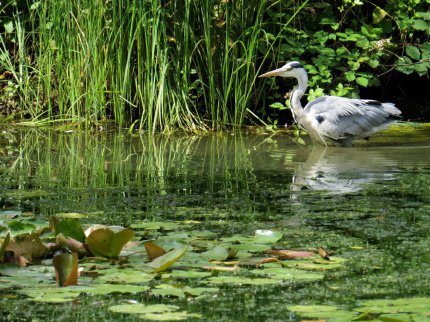 Herons are related to storks and ibises. Native and widespread in the UK grey herons not thought to be under any conservation threat but are a protected species under the Wildlife and Countryside Act 1981.

An estimated 13,000 nests exist each year and are generally re-used by the same pair. UK breeding population do not migrate. The UK wintering population is thought to be around 63,000 possibly young birds and maybe some from the near continent.

Herons will stand in shallow water watching patiently for their prey which is typically fish, amphibians, crustaceans and even small birds such as ducklings. They will also use a similar technique in open fields to hunt for insects, reptiles and small mammals. 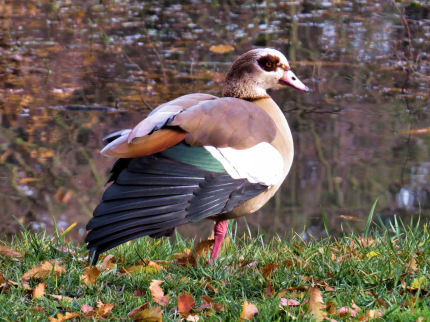 Egyptian geese were introduced in the late 17th century as ornamental wildfowl for private collections from their native Africa. Many escaped over time and are now breeding successfully as a resident species in south-eastern Britain.

More detail on the Egyptian Goose can be found on the Exotic Birdlife page within the Jubilee River page. 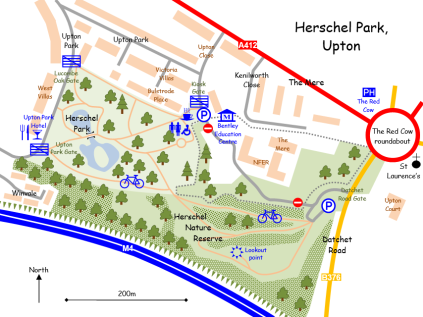 Upton Park Estate is private as are its roads that come off the A412 Albert Street/The Mere. The public can drive on these roads but street parking by non- residents can result in wheel clamping. These roads don’t show on Google Street View because they are not allowed to use the photo van on private roads.

The car park to the east is accessed off the B376 Datchet Road just south of the Red Cow roundabout. Both car parks have limited space so it is best to visit on a weekday. For Satnav N51°30’08” W0°35’27”

There are four main entrance gates and one smaller gate: 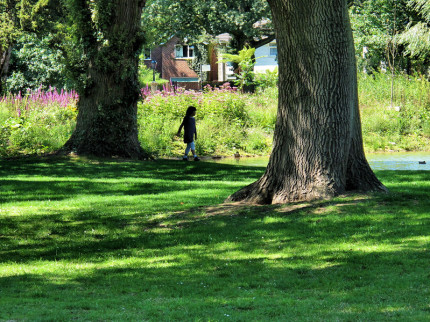