Born 8 April 1961 in Slough to Irish parents, Brian McDermott grew up in the town and attended Herschel High School (now Herschel Grammar). He was always a keen footballer and played for the school team. At the time he was a supporter of Queens Park Rangers. In 2012, McDermott had an interview with Goal.com where he stated that one of his goals was to manage the Republic of Ireland national side. He is a supporter of Sligo Rovers. 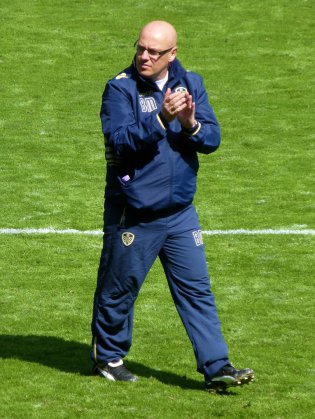 Brian McDermott pictured in 2014 while he managed Leeds United

In 1977, McDermott joined Arsenal as an apprentice, formerly joining the club in 1979 and playing in the reserve team. He was the top scorer in the Football Combination 1978-1979. His first appearance in the first team was against Bristol City in 1979 when he came on as a substitute. The following season, 1980-81 and 1981-82, he became a regular in the first team and achieved 44 starts in all competitions with 28 appearances as a substitute. He scored 13 goals in that season.

He played on loan from Arsenal for Fulham and IFK Norrköping, Sweden. Later he played for, Oxford United, Huddersfield Town, Cardiff City, Exeter City and Yeovil Town. He ended his playing career at Slough Town in 1995 and went on to become manager of the club the following season.

In 1998 he managed Woking before joining Reading as Chief Scout in 2000. In 2010 he became manager of Reading and in 2012 the club won the Championship to gain promotion to the Premiership. McDermott joined Leeds United as manager in late 2013.

In May 2014, McDermott left Leeds United. Owner Massimo Cellino said that he wanted a fresh approach to the management of the team using a head coach rather than a manager. In October 2014, McDermott joined Premiership side Arsenal as chief scout until December 2015 when he returned to Reading as manager. In May 2016, Reading sacked McDermott.

Honours as a Manager

Honours as an Individual