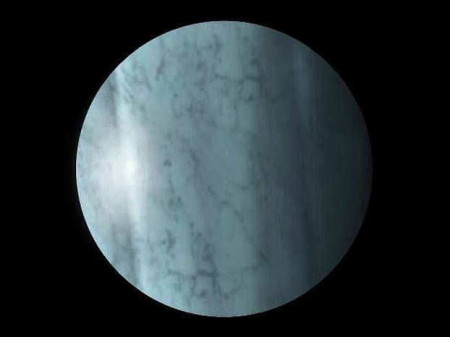 The author’s artistic impression of the planet Uranus

I created this impression of Uranus I used artistic licence with the lines to emphasise the tilt of the planet and the cloud effect to make the whole thing look more ‘realistic’.

The high rate of spin of the planet and atmosphere means that the planet probably doesn’t show any streaks but may be featureless and smooth like a giant billiard ball.

Uranus, at about 3 billion km from the sun, is the seventh planet and is thought to be the coldest planet in the solar system with a minimum temperature of -224°C. It is thought to be made of mainly icy water and methane with some rock. In 1977 it was discovered that Uranus has a ring system and so far 27 natural satellites have been identified.

Its axis of rotation is ‘tilted over’ at 97°46’8” to its plane of orbit of the sun and the rotation of its interior has been calculated at 17 hours 14 minutes. The orbit of Uranus around the sun lasts 84 Earth years and wind speeds can reach 900kmph (560mph).

The Voyager program is a NASA mission to send two robotic probes to explore the planets and moons of the outer Solar System. The dates and timings of the launch of Voyager 2 was determined to coincide with the most favourable alignment of Jupiter, Saturn, Uranus and Neptune. This alignment occurs once every 175 years and would begin in the late 1970s. Voyager 2 was launched on 20 August 1977.

Voyager 1 was launched on a faster, shorter trajectory on 5 September 1977. Its mission was to a make closer flybys of Jupiter and Saturn. Both spacecraft were delivered to space aboard Titan-Centaur expendable rockets launched from the NASA Kennedy Space Center at Cape Canaveral, Florida. 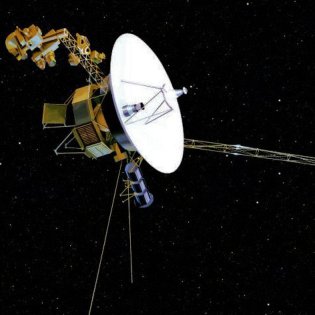 Each Voyager spacecraft weigh 773kg on Earth, 105kg of which being scientific instruments. The cost of the original program was $865 million, with the later-added Voyager Interstellar Mission costing an extra $30 million. Both probes have now left the outer limit of the known Solar System, Voyager 1, with a velocity of 17km per second, left in August 2012; Voyager 2 in November 2018.

Voyager 2 made its closest approach to Uranus on 24 January 1986. The spacecraft studied the planet's cold atmosphere, and examined its ring system, discovering two new rings discovered a substantial magnetic field around the planet and ten moons. The table gives the details of the discoveries of these moons.

The sky at night

Nowadays it is more difficult to see as much in the night sky from Slough as it was in the time of the Herschels. The reason is because of the light pollution from streetlamps that bounces around the atmosphere and filters out lots of detail. In the countryside away from streetlights the night sky is utterly spectacular.

I was staying on a campsite in a small vale in South Devon. The low surrounding hills were enough to cut out light pollution from any nearby towns. Looking up I saw a million stars and galaxies that I’d never seen before but the most humbling thing was the irregular ribbon of milky light that stretched the whole way across the sky. Our own galaxy, the Milky Way.

It is possible to see many things if you know what to look for. In April 2002, I saw the planets of Mercury, Venus, Mars, Jupiter and Saturn when they came into line. I didn’t need binoculars or a telescope; the planets were strung out in a straight line across the sky pointing to where the sun had set some half an hour before.

When Jupiter is closest in its orbit to the Earth it is the third brightest object in the sky after the Sun and the Moon. It can be possible with a relatively small telescope or even binoculars of 10x40 or 12x50 to just make out the four major Galileo satellites of Jupiter: Io, Europa, Ganymede, and Callisto. They appear as faint specks close to and in line with the planet.

In 2013, I bought myself a new compact digital camera, a Canon SX50, which has a 50x zoom lens. At the time it was probably the best compact camera on the market. In the October and November 2013, I mounted the camera on a tripod in my back garden and pointed it at the moon. After fiddling around with the exposure settings, the results were quite impressive. 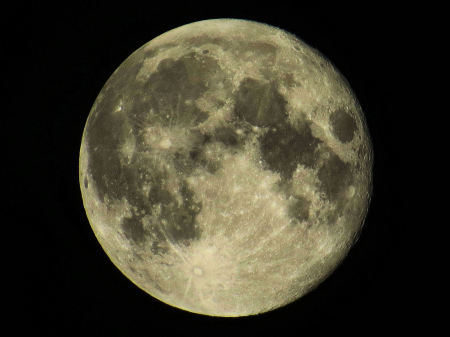 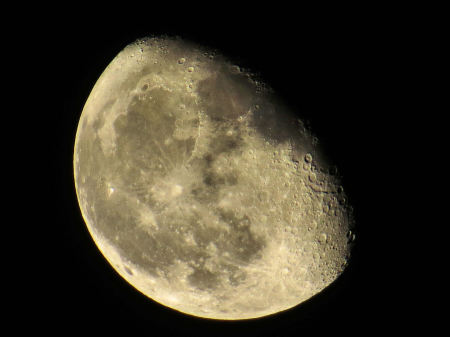 This waning gibbous, which follows the full Moon, shows pleasing shadows on some of the Moon’s craters