William Herschel’s sister Caroline contracted typhus at the age of ten and the disease stunted her growth. She never grew beyond 4 feet 3 inches. Her mother felt that she wouldn’t amount to much in life other than to find work as a servant, but her father educated her so that she would be able to support herself.

In 1772, after her father died, William brought Caroline to England where he had established himself as an organist and music teacher in Bath. Here she would learn to sing and help look after his house. As William became more interested in astronomy, Caroline assisted him reluctantly at first but gradually her interest grew and she became a distinguished astronomer in her own right. 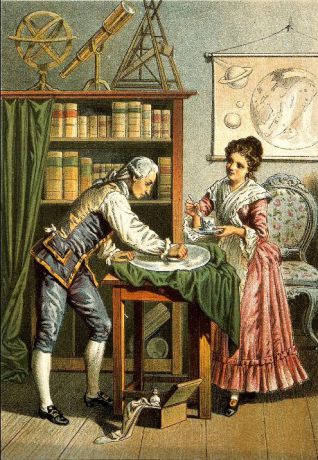 In 1782, William was appointed ‘The King’s Astronomer’ and he and Caroline moved to Datchet near Slough and eventually in 1786 they settled in a new residence on Windsor Road in Slough where William would live the rest of his life. In 1788, when Herschel married widow Mary Pitt née Baldwin, Caroline moved to a separate residence when William married but continued work as his assistant.

Caroline discovered eight comets between 1786 and 1797, notably comet 35P/Herschel-Rigollet. She took on the task of cross-referencing and correcting a star catalogue produced by English astronomer John Flamsteed. She added 560 stars to his catalogue. When William died she helped his son, her nephew John with his education and later worked with him as an independent astronomer. She later completed a catalogue of 2,500 nebulae.

The technical terms will mean something to someone. I don’t mean to be facetious but I got a Grade D for ‘O’ Level Astronomy which means I wasn't very good at the subject. Even so I am a keen follower so I will try to give a glossary of terms for the table above.

Magnitude – this term is a comparative term of brightness with no true scale that non- astronomers can fully understand. Astronomers use two different terms: apparent magnitude and absolute magnitude.

Perihelion – the point in the orbit of a planet, asteroid, or comet at which it is closest to the sun.

Caroline became the first woman to be funded by the state for her contributions to science at a time when that was some achievement even for a man. In 1828 she received the gold medal of the Royal Astronomical Society for completing and editing the star catalogues of her brother. She was made an Honorary Member of the Royal Astronomical Society in 1835 and an honorary member of the Royal Irish Academy in 1838. In 1846, on her 96th birthday, the King of Prussia presented her with a Gold Medal for Science.

Caroline died in Hanover on 9 January 1848 aged 97. A minor planet or asteroid was named Lucretia, Caroline’s second name, in 1889 and an 8 mile wide crater on the moon is named C Herschel. 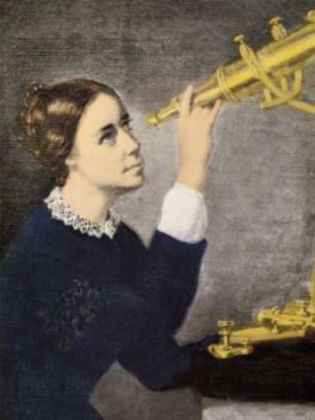