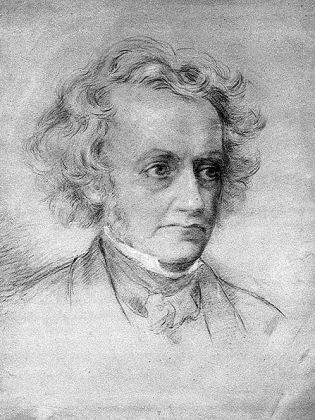 Herschel was born in Slough, Berkshire, and studied at Eton College and St John’s College, Cambridge where he became friends with mathematician and inventor Charles Babbage. He graduated as senior wrangler or top mathematics undergraduate at Cambridge University in 1813.

Herschel made several contributions to the new science of photography. In 1819 he discovered that sodium thiosulphate was a solvent of silver halides and thus could be used to fix photographs that were based on silver halide. All he needed was a subject for his photograph. 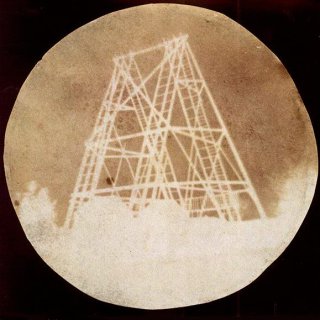 In 1839, as the woodwork had become rotten, John was determined to demolish the Great Telescope that his father William had built 50 years earlier, Before completely dismantling it, John photographed it and, using his own technique for fixing the photograph, created the first glass plate negative ever produced.

Herschel coined the term photography in 1839 and he was also the first to apply the terms negative and positive to photography.

In 1842, Herschel discovered and pioneered the cyanotype process, a photographic printing process that produces a cyan-blue print. He considered it as mainly a means of reproducing notes and diagrams.

Engineers used the process well into the 20th century as a simple and low-cost process to produce copies of drawings which became known as blueprints. The process uses two chemicals: ferric ammonium citrate and potassium ferricyanide. 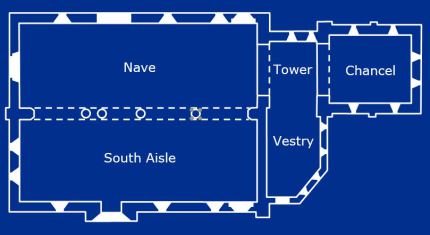 How the blueprint for St Laurence’s Church might have looked if they had the technique and Verdana font back in the 12th century.

Herschel took up astronomy in 1816, with an 18in diameter 20ft focal length reflecting telescope that he built himself. Between 1821 and 1823 he and James South studied double stars including some already catalogued by his father. The pair jointly catalogued 380 double stars and South went on alone to catalogue a further 458.

Herschel originated the use of the Julian day system in astronomy and named seven moons of Saturn and four moons of Uranus.

On the 3rd March 1829 Herschel married Margaret Brodie Stewart in Edinburgh. The couple would have 12 children. In 1833 the couple travelled to South Africa to catalogue the stars, nebulae and other objects in the southern sky. Herschel set up a telescope in Wynberg near Cape Town and collaborated with South African Royal Astronomer Thomas Maclear. 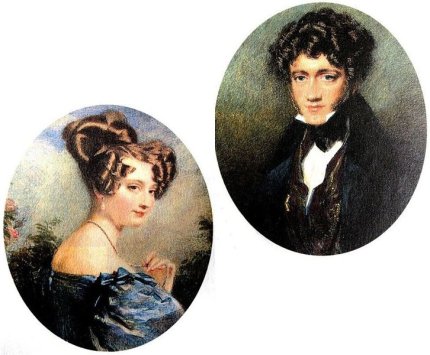 A diversion from his astronomical work came between 1834 and 1838 as he collaborated with Margaret to produce botanical illustrations of the Cape Flora. The method was to use a camera lucida, a device which uses a mirror or prism to project an image onto the drawing surface, to trace the outline of the subject. Margaret would then have the task of finishing with the fine details. The couple produced 132 illustrations in this way and 112 of these were much later used in Flora Herscheliana written by Brian Warner and John Rourke published in 1998. 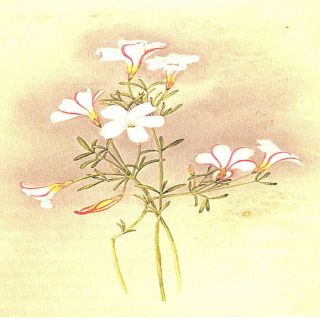 Oxalis versicolor Of the nearly two hundred and fifty species of Oxalis in South Africa, this is one of the commonest. These dwarf bulbous plants are mainly winter and spring flowering, opening only on warm sunny days. 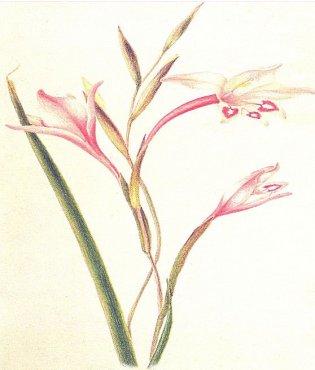 Gladiolus angustus The long-tubed painter Lady, Gladiolus angustus, is found in swamps, marshy places and along streams from the Cedarberg to the Cape Peninsula and eastwards to Bredasdorp.

A further diversion came from reading geologist Charles Lyell’s Principles of Geology. The book used geology to strengthen the argument for Uniformitarianism, the principle that the processes that are occurring in the present are the same processes that occurred in the past and this led to the understanding of evolution.

At the beginning of the 1830s, inspired by Lyell’s work, Herschel contributed his own work to Lardner’s Cabinet cyclopaedia which was a series of 133 scientific books. Herschel’s contribution was his Preliminary Discourse on the study of Natural Philosophy. This along with Lyell’s publication influenced the young Charles Darwin in his studies and later in his own work, The Origin of Species.

Herschel was created a baronet soon after his return to England in 1838. He published his Results of Astronomical Observations made at the Cape of Good Hope in 1847 in which he proposed the names for the seven then known satellites of Saturn: Mimas, Enceladus, Tethys, Dione, Rhea, Titan, and Iapetus. In 1852, he proposed the names for the four then known satellites of Uranus: Ariel, Umbriel, Titania, and Oberon.

In 1864 Herschel published the General Catalogue of Nebulae and Clusters which was a compilation of his own work and that of his father’s. Herschel’s General Catalogue of 10,300 Multiple and Double Stars was published posthumously. John Herschel died at his home near Hawkhurst in Kent in 1871. He was laid to rest in Westminster Abbey after a national funeral. 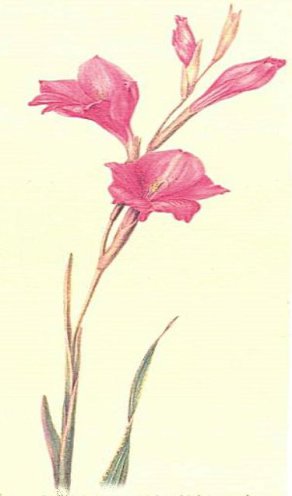 John and Margaret had 12 children, 9 girls and 3 boys. They led diverse lives and their stories are told on another page. 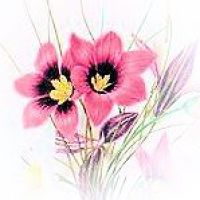