JWAE and the Porsche 917K 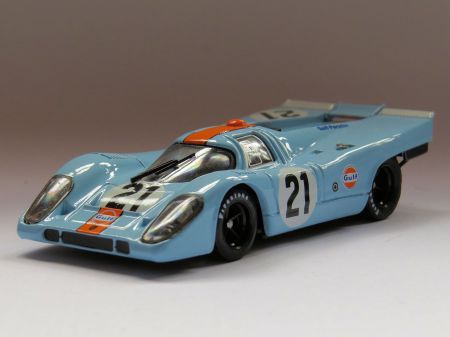 The original Porsche 917s had slick long tails to eliminate drag and thus allow high speeds. What they didn’t understand was that the car was so aero dynamically sound that they had created a car with the general profile and properties of an aircraft wing. At high speeds the car wanted to take off and sometimes did. The Porsche 917LH (Langheck or long tail) was developed with an active tail to try to increase down force.

At the 1969 Le Mans 24 hour, British driver John Woolfe driving a Porsche 917L for his own team, died in a crash at Maison Blanche, on the first lap. It seems he lost control of the car and was thrown clear of the car because he didn’t strap himself in properly on the traditional Le Mans start to the race where drivers had to run to their cars, strap themselves in then set off. The traditional start was abolished for all subsequent seasons but a driver not being strapped in correctly might explain the death but not the crash.

Two Porsche 917LHs (LH stands for Langheck or Long tail) of the Porsche System Engineering team did not finish but this was due to gearbox failures rather than aerodynamics or handling. The race was won by Jacky Ickx and Jackie Oliver driving Ford GT40 #6 for John Wyer Automotive Engineering with team mates David Hobbs and Mike Hailwood driving #7.

Even before the 1969 season started, Porsche knew they needed help with the 917, so they offered John Wyer Automotive Engineering of Slough a Porsche racing program for the 1970 and 1971 seasons. They had good reason to approach JWAE because they were impressed by the team’s ability to win consistently with their rapidly becoming obsolete Ford GT40s against much better funded teams. Wyer had a well-established sponsorship agreement with Gulf Oil who were agreeable and a deal was struck in August later that year. Porsche supplied seven 917s to JWAE.

JWAE tested a 917LH at the Osterreichring at Zeltweg where the car had won its only race to that date. Wyer's chief engineer John Horsman noticed that the front bodywork had a pattern of dead gnats dashed on it yet there were none on the rear.

Horsman concluded that the lack of dead gnats at the rear of the vehicle indicated that the air was not flowing over the tail and so no downforce on the rear wheels. The tail was hastily modified in the pits with aluminium sheets taped together to produce downforce and showed immediate improvement. From this testing JWAE designed a new tail for the car which was designated 917K, K being for Kurzheck or short tail.

John Wyer’s team scored immediate success with their inaugural outing coming first and second in the 917K at the 1970 Daytona 24 hour. The car was initially powered by a Porsche Type 912 air-cooled 4·5 litre flat 12 engine which as the season progressed, was bored out to 4·9 litre and finally 5·0 litre. The engine produced over 620 bhp and 0-60 mph was achieved in 2·3 seconds whilst 0-125 mph in an astonishing 5·6 seconds. The top speed was 211 mph.

Porsche 917Ks dominated the 1970 World Sportscar Championships JWAE Gulf entered two Porsche 917Ks, one driven by Pedro Rodríguez and Leo Kinnunen and the other by Jo Siffert and Brian Redman. Porsche Salzburg also entered a 917K driven by Hans Herman and Richard Attwood and between them all they scored 8 wins for 917Ks out of the 10 race season.

A twin-finned version of the 917K was developed for the 1971 season. This enhanced the lateral stability of the car. At Le Mans, a Martini Racing 917K numbered 22 came first, while a JWAE Gulf 917K numbered 19 came second. 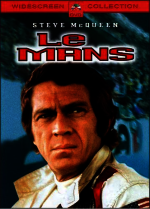 The movie Le Mans (1971) starred Steve McQueen driving a Gulf-Porsche 917K #21. It features footage from the 1970 Le Mans 24 Hour. The film production team entered its own Porsche 908/2 #29. In spite of having a camera fitted to the outside of the car and needing to make extra pit stops to change the film, the car driven by Herbert Linge and Jonathon Williams, came 9th, 32 and 39 places above the cars that it was filming.

The movie itself follows the fortunes of a race car team at Le Mans and uses the Gulf-JWAE team of the 1970 race. The plot of the movie is a little weak as is the dialogue. The best piece of dialogue comes from the character Michael Delaney (played by McQueen). When asked by racing Widow Lisa Belgetti (played by Elga Andersen) why do men race? Delaney responds:

‘Racing’s important to men who do it well. When you’re racing, it’s life. Anything that happens before or after is just waiting.’

There’s nothing bad about the film exactly, it’s more that it could be better. The action on the race track is really stunning with genuine cars of the day and of course there is no CGI. The very real cinematography more than makes up for the lack of plot and dialogue.

To view clips from the 1971 movie Le Mans click on the button below.