Bruce McLaren was born in Auckland, New Zealand, in 1937. His parents, Les and Ruth, owned a service station and a workshop where young Bruce spent a lot of time hanging around. Les restored an old Austin 7 Ulster which Bruce used in his first competition, a hill climb race.

From 1954, Bruce was becoming more seriously involved in competitions culminating in taking second place in the 1957-1958 New Zealand championship series. This result led to him being offered the place in the new Driver to Europe scheme by the New Zealand Grand Prix organisation. After racing for the Cooper F2 and F1 teams for seven years, Bruce McLaren set up his own team in 1964 based initially in New Malden then Feltham before settling in Poyle, Slough in 1965. 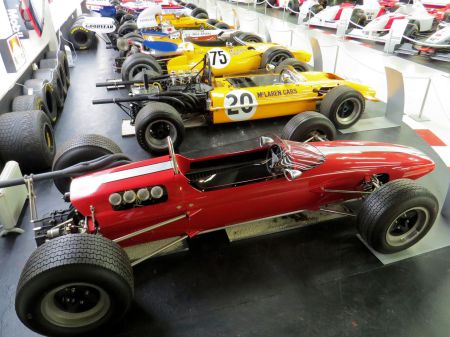 The first in the a line of McLaren racing cars at Donington is a 1968 M4A Formula Two car followed by a four-wheel drive M9A Formula One car.

The McLaren M6A was developed by driver Bruce McLaren and his team for entry in 1967 Can-Am season. Bruce McLaren brought together Robin Herd, Gordon Coppuck, Tyler Alexander and Don Beresford to work with him on the layout of the M6A’s chassis and bodywork in early 1967. A fuel injection system was developed for the Chevrolet V8 engines and the first car was ready in spring 1967. The team carried out 2,000 miles of testing the car on the Goodwood circuit.

This image is an impression of Bruce McLaren’s McLaren M6A which, alongside Denny Hulme's No 5, dominated the Can-Am Challenge Cup in the late 60s and early 70s.

McLaren cars totally dominated CanAm sports car racing between 1967 and 1972 with five constructors’ championships and 56 wins, many of them with Bruce in the driving seat. McLaren also won three Indianapolis 500 races, as well as the 24 Hours of Le Mans and 12 Hours of Sebring. The M6B was developed by McLaren and technical partner Trojan which was sold to customers for use in Can-Am as well as other racing series.

Bruce McLaren won the Drivers’ Championship for the season with 30 points, his team mate Denny Hulme came second with 27 points and John Surtees third with 16 points. Extraordinary results when you consider that these drivers’ teams were all based in Slough. Hulme won the 1968 season with McLaren taking second place. In 1969 the pair swapped places again with McLaren winning and Hulme second.

The M6GT was essentially a coupé version of the M6 developed as a sports car for the 24 Hours of Le Mans. The company failed to register it as a production car it for the FIA’s Group 4 regulations however, and only a few M6GT prototypes were finished by McLaren and Trojan.

The first prototype, built at the McLaren racing factory in Poyle, became Bruce’s personal car. The car was made road legal and registered OBH 500H. It was sold to Denny Hulme who took it to New Zealand and was eventually sold to the Mathews Collection near Denver Colorado where it remains with only 1,900 miles on the clock.

This image represents the other McLaren M6GT prototype to be that was made road legal. It was registered 2 GLA and classified by the DVLA as a Historic Vehicle.

The McLaren team entered Formula One in 1966 at Monaco which makes them the second oldest of the current Formula One teams after Ferrari. The team used their own M2B which was underpowered so McLaren’s beginning in Formula One was inauspicious for the first two seasons.

In 1968 the team had a new M7A car and Bruce was joined in Formula One by a second driver, fellow New Zealander Denny Hulme and they scored their first victories: McLaren at Brands Hatch and Hulme at Silverstone in non-championship races. The first Formula One win was by McLaren at the Belgian Grand Prix followed by Hulme at the Italian and Canadian Grand Prix. The team came second in the constructor’s championship in this, their third year in Formula One.

In 1970, Bruce McLaren tragically died at Goodwood testing the new M8D just a few days before the Can-Am season began. He was aged 32. Teddy Mayer took control of the team which still dominated the competition. Hulme took the Driver’s championship and his new team mates Peter Gethin and Dan Gurney coming 3rd and 7th respectively. The team won 9 out of the 10 races of the 1970 CanAm season.

The McLaren M23 was introduced for the 1973 Formula One Championship. Hulme drove it to win in Sweden and Revson won in Britain and Canada. The following year there were wins for the car driven by Hulme in Argentina, and Emerson Fittipaldi, who won in Brazil, Belgium, Canada and the United States to take the championship. It was the first driver’s championship for a McLaren driver.

Fittipaldi left the team and was replaced in 1976 by James Hunt. With just seven races to go Hunt had just 26 points whilst Niki Lauda driving for Ferrari had 56 points. Lauda had a life-threatening crash at the Nürburgring in Germany. Incredibly he returned three races later at Monza, Italy. Hunt won 4 of his last seven races to win the championship by just one point over Lauda. The relationship between Hunt and Lauda centred on the 1976 season is portrayed in the 2013 Ron Howard film Rush.

Hunt retired from driving halfway through the 1979 season and began a commentating career with the BBC. He died in 1993 from a heart attack aged 45. Lauda would race and win the driver’s championship for McLaren in 1984. To see an abridged account of the British grand Prix of the 1976 season click on the button below.

In the early 1980s, McLaren moved from Colnbrook to Woking in Surrey and in 2004, McLaren’s moved into their new state of the art factory in Woking, Surrey, opened by HRH Queen Elizabeth II. 51 years since the team’s foundation, they won 182 Formula One grand prix races and 20 world championships, with champion drivers Emerson Fittipaldi, James Hunt, Niki Lauda, Alain Prost, Ayrton Senna, Mika Häkkinen and Lewis Hamilton.

Rush (2013) is a Ron Howard film centres on the rivalry and respect between James Hunt and Niki Lauda during the 1976 Formula One season. The story is powerful and the production seems to recapture the racing scene of the era. Hunt drove the McLaren M23 #11 and the film uses a mixture of genuine vintage race cars as well as faithfully produced mock-ups. Computer-Generated Imagery is also used mostly to enhance the different race venues from around the world.

Le Mans is available on DVD and Rush on DVD and Blu ray from Amazon.com