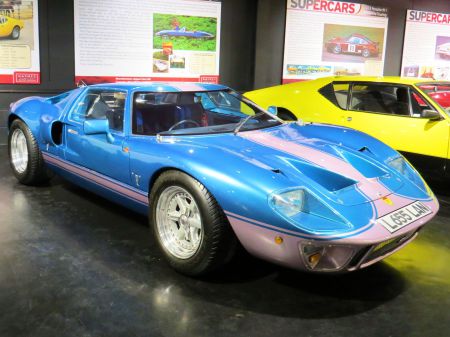 A replica Ford GT40 at the Haynes Museum

In the 1960s, Henry Ford Junior wanted a race car bearing the Ford badge that would win the Le Mans 24 Hour race. Enzo Ferrari’s team were dominating the event having won the 6 consecutive years from 1960 to 1965. Ford Junior’s chosen solution was buy the Ferrari car and stick a Ford badge on it! Not exactly the true spirit of the race, but amazingly, Enzo Ferrari initially responded positively to the idea and began negotiations. However, just as the deal seemed set, Ferrari pulled out.

Ford approached Eric Broadley of Slough-based Lola Cars to design a new car. They also approached John Wyer of Slough-based JW Automotive Engineering (JWAE) to head the project. Ford provided their own engineer, British-born and educated Roy Lunn, to work on the engine design. I’m emphasizing the British involvement in the project because many American accounts of this piece of motor racing history tend to ignore these facts and will have you believe that the whole project, from concept to manufacture, came out of Ford’s Dearborn plant in Detroit.

The team was established in 1963 and called Ford Advanced Vehicles. The team began working on the new car at the Lola Factory in Bromley but soon moved to Wyer’s JWAE Mirage factory in Yeovil Road, Slough Trading Estate. The car, which was to become the Ford GT40, was based on Broadley’s Lola GT design.

The first victory came in 1965 at the Daytona 2,000 with a GT40 driven by Ken Miles/Lloyd Ruby. In 1966 the Ford GT40 came properly good and proved to be reliable. In February, Shelby-Ford scored first place at the Daytona 24 Hours with their 7·0 litre GT40 Mk II driven by Ken Miles/Lloyd Ruby. This was followed by victory at Sebring 12 Hour also with the Miles/Ruby partnership. 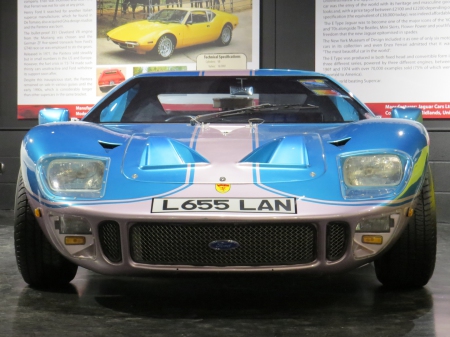 The GT40 is 40 inches tall, I measured it myself

In 1967, Shelby-Ford entered three GT40s, two Mk IVs; #1 driven by Dan Gurney/AJ Foyt took first place with #2 driven by Bruce McLaren/Mark Donohue came fourth. The other car was a Mk IIB driven by Ronnie Bucknum/Paul Hawkins which did not finish but was placed eighteenth.

When Gurney was presented with the bottle of champagne, he shook the bottle and sprayed everyone around and established a new tradition to be followed by motor racing winners ever since.

1967 Ford GT MkIV #1, race winner in the 12 Hours Sebring driven by Mario Andretti and Bruce McLaren. It was its only race this car took part in as it was the last of four prototypes before MkIV production.

Certain rules were changed for the 1968 season, in particular engine size limits were brought in. An overall restriction to 3·0 litre engines was imposed but cars up to 5·0 litre were allowed to compete in the Sport category so long as at least 50 cars were built. Ford, for reasons best known to themselves, did not enter any cars for this season but John Wyer bought out the British part of Ford Advanced vehicles and entered three GT40 Mk Is. A further two Mk Is were entered by other teams.

The team raced under the name of JW Automotive Engineering. Two of JWAEs cars pulled out; one on Lap 15 with clutch failure, the other on Lap 107 with engine failure, leaving just one car in the race with 17 hours to go. As it turned out they only needed one car. GT40 #9 driven by Pedro Rodriguez/Lucien Bianchi won the race after 331 laps.

At the 1969 Le Mans 24 Hour, JWAE GT40 driver Jacky Ickx protested against the traditional Le Mans start where drivers run across the track to their cars, strap themselves in and roar off. Instead he walked to his car, nearly being knocked over by an over-enthusiastic driver from the back of the field, and strapped himself in securely before setting off last.

The reason for his protest was demonstrated very soon with the death of John Woolfe before completing the first lap. Woolfe was driving a Porsche 917LH, a notoriously difficult car to handle, when it left the track at the fast Maison Blanche curve. He was thrown clear of the car indicating that he hadn’t strapped himself in securely. For subsequent years the drivers had to be strapped in their cars before the start. Later a rolling start would be adopted.

In spite of starting last, the race was won by Jacky Ickx/Jackie Oliver in their 4·9 litre GT40 Mk I #6. Team mates David Hobbs/Mike Hailwood came in third driving #7. Three other GT40 Mk Is were entered in the race for other teams, the best result being for Helmut Kelleners/ Reinhold Joest who came sixth driving #68 for Deutsche Auto Zeitung. Ford again did not compete.

It was the last Le Mans for the GT40 as, even before the season began, Porsche were negotiating with JWAE to solve the aerodynamic problems of their 917. 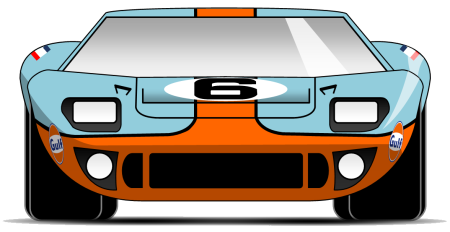 One hundred and seven GT40s were built. The Mark I and III were made in Britain, the Mark IIs and IVs were built in the USA.

To view a Ford GT40 in authentic Gulf blue and orange livery click the button below. 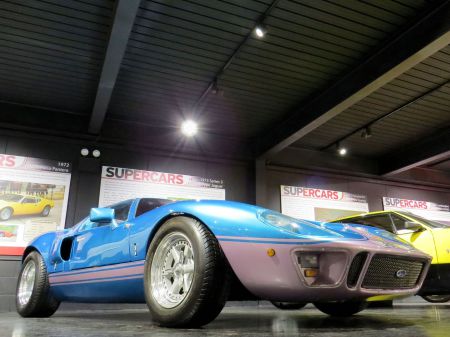 One more look at that fabulous car at the Haynes Museum

The GT40 Enthusiasts club is run for anyone who is passionate about the GT40 and the club consists of members from all around the world. The club and members have original GT40's, and virtually every type of replica ever produced. The club organises or is involved with events such as meets, displays, track days at venues across Europe especially the Le Mans Classic.

To learn more about the Ford GT40 Enthusiasts Club click on the button below:

The Ford GT is a rear-engine rear wheel drive sports car based in style on the British Ford GT40 Le Mans race-winning car of the late 1960s. It is bigger and wider and shares no commonality in structure of the original race cars. It is 3in taller than the original GT40 which was named for its height of 40in.

Jeremy Clarkson and the Ford GT on Top Gear

Clarkson’s antics with the new GT began with a positive review made on the streets of Detroit in episode 1 of series 3.

In episode 8 of series 4, Clarkson demonstrates that he couldn’t get into the original British GT40 design because he was too tall. He reviewed the GT on the track and ran out of petrol. The tank is 17·5 litres and driven economically the car was quoted at 12mpg, with Clarkson on the track he achieved 4mpg. Best official consumption is quoted as 23mpg cruising on motorways.

Clarkson revealed that he was on the shortlist of just 28 cars coming to Britain and that he intended to use it every day. Hammond and May were helpful as ever and asked Clarkson what the range on a full tank would work out at.

‘And how far is your house to the Top Gear Track?’

’76 miles’ he said even more sheepishly

That means that when he drives to the studio he will have to fill the fuel tank on the way there and again on the way home. 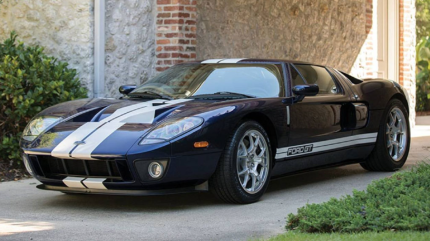 A Ford GT was parked in the studio and Hammond parks a car next to it at a reasonable distance simulating parking in a British car park. He invited Clarkson to get in. He couldn’t because the doors both have roof sections on top and he couldn’t squeeze in the small gap underneath. The Stig drives the GT on the track and achieves a lap time of 1minute 21·9 seconds.

Style guruesses Trinny and Susannah are guests in episode 9 Series 5. Clarkson shows an image of a Ford GT, Trinny simply says ‘mid-life crisis’ and Susannah describes it as ‘the floral dress.’

By episode 2 of Series 6 Clarkson's new Ford GT arrived and caused him problems over the past week. It refused to start when he attempted to leave the studio after the show and he was forced to borrow a Toyota Corolla for the journey home.

The GT’s alarm went off during the night a number of times for no reason, disrupting Clarkson’s family. The tracker system malfunctioned, sending out SOS calls to Ford who remotely shut the car down believing it to be stolen while Clarkson was driving it. The car went back to Ford to be fixed and they lent him a Ford Focus courtesy car.

In episode 3 Series 7 the three presenters each took a favourite supercar; a Pagani Zonda, a Ferrari F430 and Clarkson’s own Ford GT on a road trip to the recently completed Millau Viaduct in France. Clarkson ran out of money filling his Ford GT with fuel and had to borrow off James May. 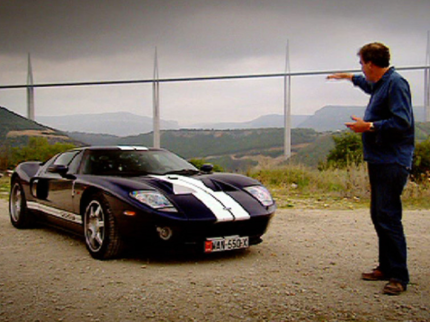 Jeremy Clarkson and his Ford GT at the Millau Viaduct

The Ford GT First Generation is a beautiful car and I  love it not least because it’s shape is based on the original British GT40 designed by Lola boss Eric Broadley. It is clear however that as a road car it is very poor in terms of practicality, fuel consumption, fuel tank capacity and the problem with the doors forming much of the roof. When they were new the price was £111,000. A lot of money for a car that will continue to drain your pocket.