The 1976 FIA Formula One season was one of the most eventful and exciting in the sport’s history. It’s remembered for the rivalry and friendship between the British driver James Hunt of the Colnbrook-based McLaren team and defending champion Niki Lauda from Austria who drove for Ferrari. These two drivers couldn’t be much more different to each other.

Hunt was a playboy and thought of as reckless on the track. He had already earned the nickname ‘Hunt the Shunt’ earlier in Formula 3. Lauda was methodical and cool. He worked with his mechanics to get the best out of his cars. His risks were considered and calculated.

Hunt was to die young at the age of 45 as his fast life caught up with him. Lauda is still alive and, at the time of writing, aged 66 despite suffering horrific life-threatening injuries in the 1976 season. The friendship and rivalry of Hunt and Lauda inspired the Ron Howard 2013 movie Rush.

The first race of the season was at the 5 mile circuit at Interlagos in Brazil. James Hunt qualified in pole position with Niki Lauda in second. Clay Regazzoni (Ferrari) took the lead but had to visit the pit for repairs after colliding with Jean-Pierre Jarier (Shadow). Lauda led from Hunt and Jarier but neither of these drivers finished the race. Hunt’s throttle jammed and he crashed out and Jarier skidded on oil on the track. Lauda’s defence of his title began with first place.

Regazonni qualified in pole position with Patrick Depailler (Tyrell) next to him. Hunt and Lauda were on the second row. Hunt tried to pass Depailler but they collided and hunt went off. The incident allowed Lauda through and the race finished with a 1-2 for Ferrari with Regazzoni first and Lauda second. Despite the collision with Hunt, Depailler finished in fifth position.

At the Jarama circuit near Madrid the Tyrell team entered the P34 six-wheeled car for Depailler who qualified with the car in third position. Hunt and Lauda were pole and second and again Lauda beat hunt away from the line. At some point in the middle of the race Hunt and teammate Mass went past Lauda. Late in the race Mass retired with engine and it ended with Hunt first and Lauda second.

After the race Hunt was disqualified because his car was too wide. McLaren appealed explaining that the tyres expanded during the race and two months later Hunt’s win was restored.

At Zolder near the Dutch/Belgian border, Lauda qualified for pole position with Ferrari teammate Regozzoni alongside. Hunt dropped back to sixth and eventually retired with transmission failure. Lauda took first place with Regazzoni second.

Lauda took pole position with Regazzoni alongside again. Regazzonni lost places and finally went off while trying to take third just 5 laps from the end. Hunt had retired after lap 24 with engine failure. Lauda’s championship lead was now a massive 36 points ahead of Regazonni. Hunt’s Spanish win had still not been reinstated at this time.

Jody Scheckter took pole position at the Anderstorp circuit in his six-wheeled Tyrell P34. Mario Andretti (Lotus) was alongside. The two Tyrells of Scheckter and Depailler came first and second with Lauda third and Hunt fifth.

Normal service was resumed at the Paul Ricard circuit in the south of France with Hunt on pole and Lauda alongside. Again Lauda beat Hunt off the line but his engine failed after the eighth lap forcing his early retirement from the race. Regazzoni (Ferrari) also dropped out with engine failure after 17 laps. Hunt went on to win race with Depailler (Tyrell) second.

At Brands Hatch Hunt was involved in a first crash and the red flags were brought out to stop the race. Hunt drove his damaged car back to the pits via a short cut before the flags came out and was initially not allowed to restart. The British crowd chanted for Hunt and the race officials bowed to pressure and allowed Hunt to restart. Hunt went on to win with Lauda second. After the race a number of teams protested including Ferrari and two months later Hunt was disqualified giving the win to Lauda.

At the notorious Nürburgring, Hunt qualified for pole position with Lauda alongside for the fourth time of the season. Regazzoni (Ferrari) soon led the race to Hunt. Lauda was slow and dropped several places. On the second lap Lauda lost control of his car due to a suspected suspension failure. His car crashed into barriers and bounced back onto the track, catching fire iin the process. The car was hit by the cars of Herald Ertl (Hesketh) and Brett Lunger (Surtees). The two drivers got out of their cars and with Arturo Merzario and Guy Edwards pulled Lauda from his burning car. Lauda was taken to hospital with severe burns, fighting for his life.

The race was restarted with empty spaces on the grid for Lauda, Ertl and Lunger. Hunt led from the start. Regazzoni in second spun off and lost several places while Depailler hit the barrier trying to avoid him and retired from the race. Hunt won the race with Scheckter second and Mass third.

Lauda’s condition was no longer life threatening but the Ferrari team were so shocked that they did not compete at the Österreichring. Hunt took pole position but the lead changed hands a number of times with British driver winning the race and Hunt took fourth.

Niki Lauda returned to Formula 1 here at Monza just 6 weeks after his near fatal accident at the Nürburgring. Jacques Lafitte (Ligier-Matra) took pole position, Lauda was fifth and Hunt, along with Watson and Mass, was sent to the back of the grid for fuel irregularities. Scheckter in his six-wheeled Tyrell led the race at the start while Lauda fell back several positions. He fought his way back however and finished fourth. The race was won by Ronnie Peterson (March). Hunt had spun off after 11 laps while trying to move up the field. 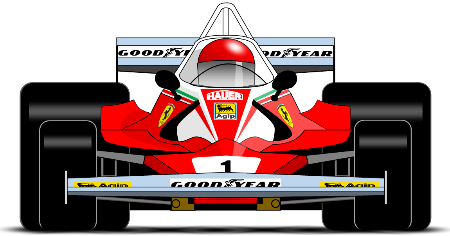 The decision to disqualify Hunt from the British Grand Prix was made after the Italian Grand so he started the race with 47 points and Lauda had 3 points added to total 64 as he became that events’ winner.

Hunt qualified for pole position but started badly with Peterson taking the lead. Hunt was back in charge on the tenth lap however, and Lauda, who had got up to fifth until problems with handling dropped him from the points.

At Watkins Glen Hunt took his eighth pole position of the season with Scheckter’s six-wheeled Tyrell alongside. Hunt started badly yet again and Scheckter took the lead. Hunt and Scheckter battled through to the middle of the race until Hunt took the lead for thhe second tie in the race and went on to win. Lauda made the podium behind Scheckter.

On this final race of the season Hunt was three points behind Lauda and the mathematics for Hunt to win was rather complicated since it obviously depended on how both drivers finished. For example if Hunt won for 9 points and Lauda came second with 6 they would finish level on points but the championship would go to Hunt as he had won more races through the season. There were of course a number of other permutations that could decide the championship.

In qualifying Andretti was in pole position, Hunt second and Lauda third. It rained heavily on race day and some of the drivers protested that it was too dangerous to race. At the end of the second lap Lauda withdrew for this very reason. Fittipaldi and Pace also withdrew. Hunt was leading but being challenged by Bambilla (March) until the Italian spun out of the race.

Hunt now only had to finish fourth to gain the 3 points necessary to snatch the championship from Lauda. By mid-race Hunt’s teammate Mass had got into second and did his best to block any challenge on Hunt’s lead. Mass eventually crashed out in the poor conditions. With 11 laps left Depailler and Andretti went past Hunt to put him into second place, but this position would still win the championship for Hunt.

The cars of these front three were all badly worn though and Depailler’s car suffered a tyre burst. Hunt’s machine suffered a similar fate and he was forced to pit for new tyres. When Hunt re-joined the race the order was Andretti first, Jones (Surtees) second, Regazonni (Ferrari) third, Depailler fourth and Hunt fifth. Jones and Regazonni were both driving on poor tyres and with just two laps left, Depailler and Hunt went through claiming second and third respectively to Andretti’s first place. The four points gained by Hunt being enough for Hunt to claim the 1976 championship.