There are some 22 species of ducks on the British List. Here are the most likely to be seen on the Jubilee River. The illustrations are of male ducks, Females, which are usually mottled brown, are described in the text. 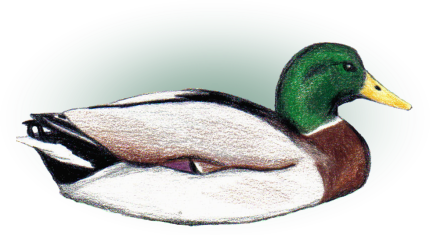 The female is mainly speckled brown with a yellow bill and has purple speculum. Mallards in the UK are resident breeders or migrants with many of the birds that breed in Iceland and northern Europe coming to spend the winter in Britain.

Mallard are dabbling ducks. They feed on the banks of rivers and lakes on seeds, acorns and berries. On the water near the surface on plant material, insects and shellfish. Sometimes they will upend to get deeper.

The chicks leave the nest within 24 hours of hatching and can swim and feed themselves. They stay close to their mother and if threatened the mother will create a diversion by splashing about, feigning an injured bird, while the chicks scatter and hide.

At the end of the breeding season the males moult into eclipse plumage and look similar to the females. They are flightless for about two weeks then their full colour breeding plumage returns.

Sexes alike except no knob on bill on female. Shelduck are bigger than mallard but smaller than geese. Shelduck are resident but the population swells from 15,000 to 60,000 in winter. From July, shelduck move to their moulting areas. During this period they are flightless for about four weeks.

Shelduck have tooth-like projections along their bills called lamellae which are used to filter the water for food in wet sand or mud. One of their favourite foods is the small snail hydrobia ulvea but they also feed on invertebrates, small shellfish and other aquatic snails. 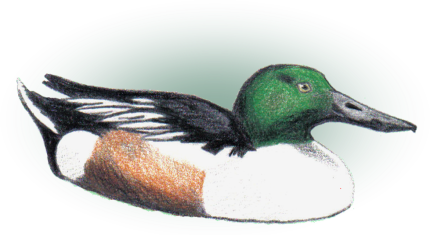 Females are mottled brown. Shoveler are resident but the population swells from 2,000 to 18,000 in winter with birds coming from northern Europe.

Shoveler have large broad bills which have tooth-like lamellae for filtering small creatures from surface water. Sometimes they will upend get food from under the surface. Shoveler feed on small insects and plant matter sifted from the water. 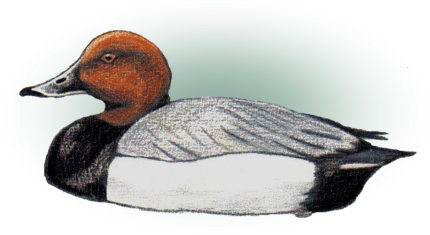 Females and males in eclipse plumage are shades of greyish brown in gently mottled patterns. They also have a grey bill with a black tip. Pochard are resident with about 600 breeding pairs. The winter population swells to nearly 50.000 birds from Eastern Europe and Russia.

Pochard are diving ducks and will spend upto15 seconds underwater diving to as much as 3m for food such as plants, snails, small fish and insects. 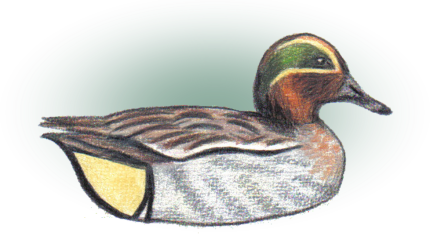 Teal are the smallest European duck. Females are mottled brown and has bright green speculum like the male. Teal are resident with up to 2,800 breeding pairs. The winter population swells to over 200,000 birds from Eastern Europe and Russia.

Teal feed in shallow water filtering mud for seeds and invertebrates. Much of the feeding takes place at night to avoid predators. They roost in small groups during the day. 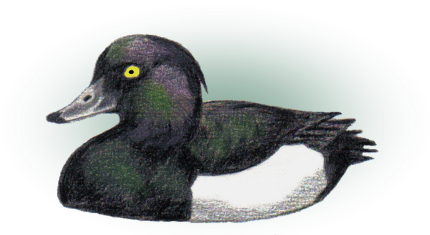 Females and male eclipse are shades of brown. Tufted duck are resident with nearly 20,000 breeding pairs. The winter population swells to about 120,000 birds from Northern Europe and Iceland.

Sometimes tufted ducks will upend for food but usually they will dive as much as 7m for food. Tufted feed on molluscs especially zebra mussels, insects and plants. 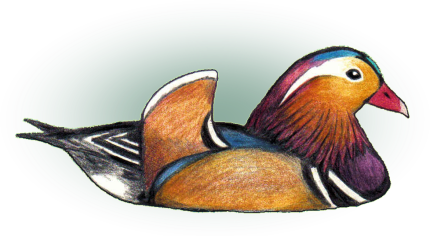 The female is dull with a grey head and white stripe behind the eye, brown back and mottled flanks. Mandarin were introduced to the UK from China as ornamental birds for parks, gardens and private collections.

They have become established as a British species following escapes from captivity and there may be a population of 2,300 pairs, as many as the population in Japan. The winter population may shrink to around 7,000 birds as some may migrate to warmer parts of Europe.

They can be seen all year round. They are dabbling ducks and eat insects, vegetation and seeds. In the autumn the will eat acorns. 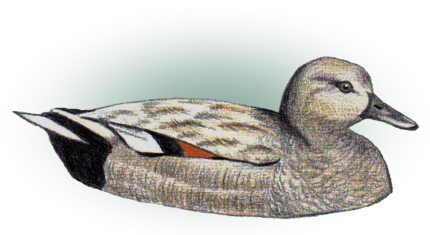 Female has a light brown head and a brown mottled body. Male in eclipse is essentially similar to female but retains the white speculum. Gadwall are resident all year round and the UK population may be up to 800 pairs growing to 17,000 in the winter with birds migrating from Iceland and northern Europe.

They are dabbling ducks and will upend to eat stems, leaves and seeds. Sometimes they will follow deeper feeding species to benefit from any food that they disturb. 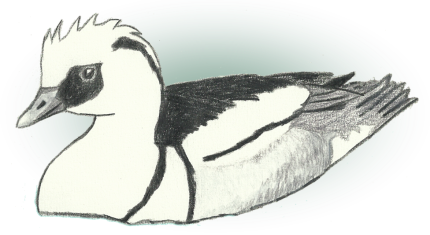 The female has a chestnut crown and nape with white cheeks. The body is gently mottled brown. The males look like cracked white porcelain. Smew are rare winter visitors but their numbers may increase if the winter in their usual wintering ground s is particularly severe.

They are sawbills and have tooth-like projections around their bills for gripping fish. They dive to up to 4m to catch small fish, shellfish and insect larvae.