There are some 14 species of hawks and falcons on the British List. Here are the five most likely to be seen around Slough. 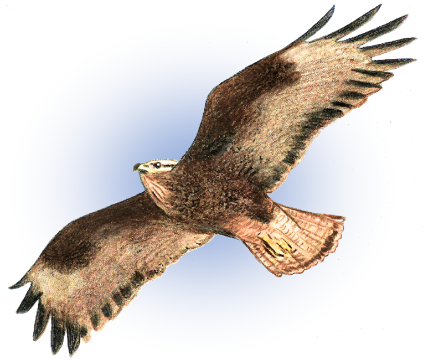 Buzzards have variable plumage with underparts lighter in tone than upperparts. Irises are yellow with black pupils. Yellow bill with black tip. Yellow legs. Tail is relatively square when closed and rounded when fanned. Wings are broad with rounded tips.

Flight is generally soaring on thermals and updrafts. They patrol the sky watching the ground for mammals and other creatures, rabbits are a typical favourite. They have been known to hover over a particular spot in a way not unlike kestrels, their big wings looking a little slow and ungainly by comparison.

Around Slough they are mostly to be found over open ground such as the Jubilee River at Dorney Wetlands and near Herschel Park. 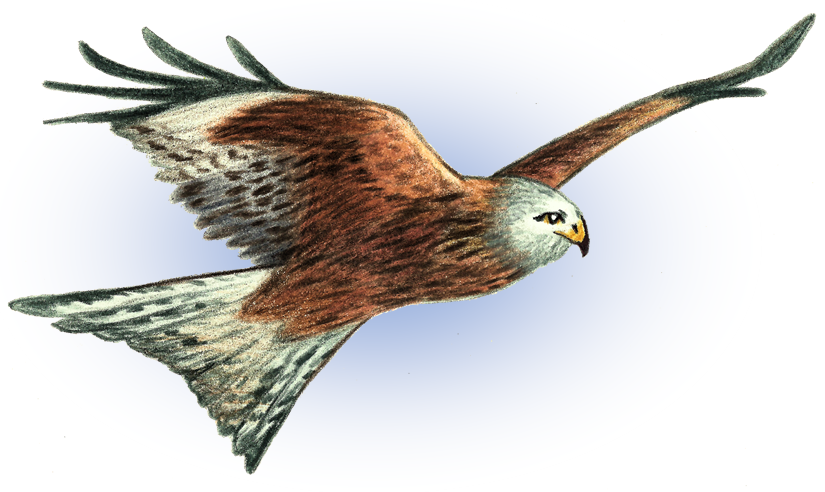 Flight can look untidy and floppy compared to the buzzard but it will also soar on thermals and updrafts. Kites patrol the sky watching the ground for mammals and other creatures but carrion is a favoured foodstuff.

Adult male sparrowhawks have bluish-grey back and upper wings. The chest and belly is light coloured with orangey-brown bars. Females have brown back and wings, and brown bars underneath. Young birds are similar in colours to the females.

Irises are yellow with black pupils and they have long yellow legs. They have relatively short rounded wings and long tail which is straight when closed and rounded when fanned. Females are larger than males, as with most birds of prey. 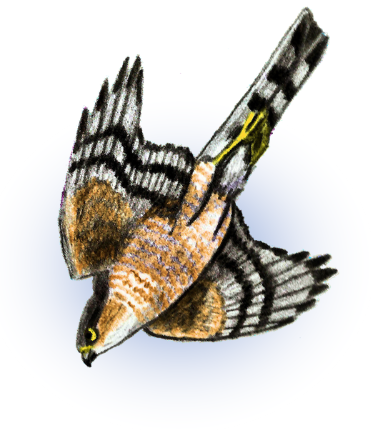 Their technique for hunting is to soar into the sky looking for flocks of small birds feeding along the side of a hedge. They will then go into a steep dive at the birds and, to increase surprise, they may go the wrong side of the hedge then flip over it to snatch a victim before the other birds knew anything of the attack. Favoured prey are small birds such as sparrows, finches an tits but they may go for bigger prey should the opportunity presents itself Their short wings allow them to chase birds in confined spaces like woodland or gardens.

On 12 March 2006, my dad was sat near indoors next to my patio window and I was deeper in the room. A female sparrowhawk suddenly dropped onto the patio squeezing a half-dead starling in it right talons. Knowing my dad he may have tried to scare the sparrowhawk away leaving a dying starling to suffer a longer agony and if that happened I would have had to have finished the poor creature off. It was much kinder to allow the events to take their course.

‘Dad, dad don’t move!’ I said as I froze myself, ‘whatever you do, you must stay still!’ Thankfully he did but the starling nearly half a minute to die. When it was finished the sparrowhawk took it down the garden to my rockery momentarily before taking it away no doubt to a plucking post. 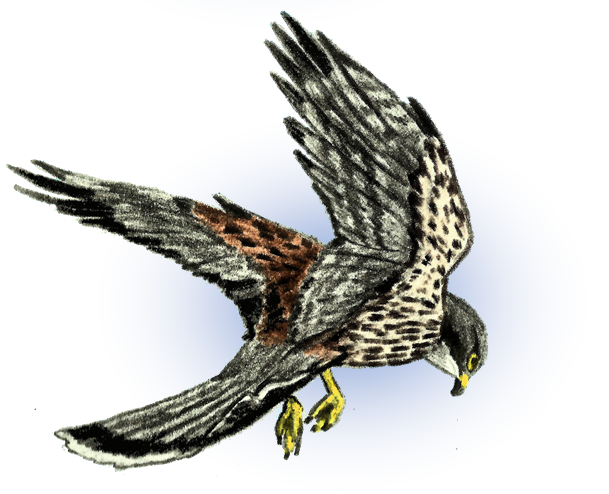 Kestrels have long pointed wings and a long tail. Males have brown wings and backs with dark streaks. Primary and secondary feathers are grey with dark tips. The tail is grey with a dark bar near the tip. The head is grey with a light coloured chin. Chest and belly is light coloured with dark streaks. The very tip is white. Irises are yellow with black pupils. Legs are yellow, bill is yellow with a black tip. Females are mostly brown and they are larger than males. Young resemble females.

The hunting technique is to hover over wild grassland, typically motorway verges, keeping their head still while watching intently for movement in the grass below. Kestrels near cliffs and inland escarpments may hunt more like a typical falcon, wheeling around to catch prey on the wing. 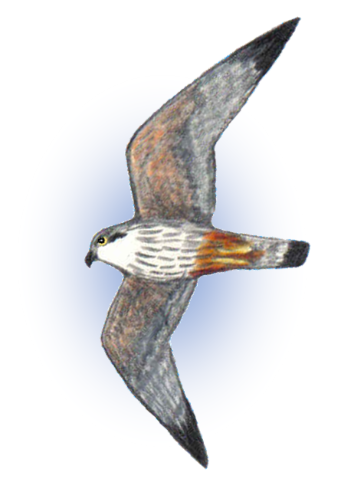 Hobbies have long pointed wings and a much shorter tail than kestrels. Males have plain grey wings and backs. Undersides are light in colour with streaks. Primary and secondary feathers are similar with dark tips. They have a distinctive auburn triangular patch around the yellow legs. The head is grey with a light coloured chin. Chest and belly is light coloured with dark streaks. Irises are yellow with black pupils. Legs are yellow, bill is yellow with a black tip. Females are mostly brown and they are larger than males. Young resemble females.

The hunting technique is to chase at speed after dragonflies, swallows, martins and swifts, all of which are their favoured prey. They will often catch a dragonfly in the talons of one leg and transfer it to its bill in flight. Hobbies can accelerate rapidly in flight and are capable of high-speed aerial manoeuvres.

Hobbies winter in Africa and migrate to Britain to breed. There is a clump of trees along the Jubilee River to the west of Slough where they usually nest, but they often come downstream to Dorney Wetlands and beyond to hunt. Despite its name Dorney Wetlands falls within the boundary of Slough.