Slough industry, like industry across the country, was seriously affected by World War Two. Men of fighting age were called up to serve in the armed forces all over the world. Some were in reserved occupations such as workers in the power station or working on vital engineering work or food production in factories. Some factories had to adapt from their normal activities to producing components for the war effort.

Slough Trading Estate was buzzing with activity and many companies were engage in the aviation industry in one way or another. The diversion of some companies to aviation from their pre-war activities left them in state that was difficult to recover from post-war as technology in their field had left them behind. Other companies thrived even beyond the war. 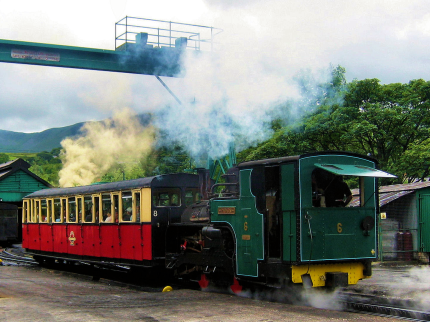 No direct connection to Modern Wheel Drive and certainly none with Slough. Just an excuse to show one of these charming locomotives. This is 0-4-0 steam locomotive No 6 Padarn built in 1922 and is fitted with an SLM gearbox.

Part of the manufacture of these steam locomotives included the gearboxes. Modern Wheel Drive (MWD) was formed in the 1920s in Slough with a licence agreement to produce SLM gearboxes along with the marketing rights for them within the British Empire whilst SLM would continue to supply the rest of the world.

Some MWD gearboxes manufactured in Slough were particularly supplied to Davey Paxman & Co Ltd for their marine engines. Some of these boxes were made under a further licence by Ruston & Hornsby at Lincoln and possibly other manufacturers. The gearboxes were used in Paxman engines installed in small ships, trawlers and tugs etc.

A large number of the diesel engines for Landing Craft Tank were built by Paxman and these had MWD reduction gearboxes. The early gearboxes were built by Ruston & Hornsby of Lincoln under licence from MWD. The factory could produce ten to twelve units a week and it soon became clear that this wouldn’t be sufficient to meet the coming demand.

The solution was to increase the small manufacturing plant on Slough Trading Estate. Up to that time the facility was used for the assembly of rotary compressors, and vacuum pumps for railway braking systems. Administration offices and the drawing office were moved to Springfield Avenue, Chesham, a few miles away and later to a country house at Lindo Lodge, Chesham. In Slough, the acquisition of some adjacent buildings was made and the factory for building more reduction gearboxes to supplement the Lincoln plant. 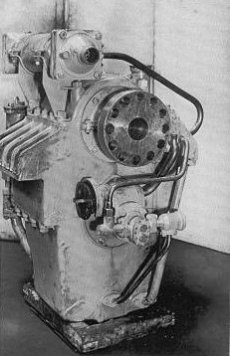 The solution was to increase the small manufacturing plant on Slough Trading Estate. Up to that time the facility was used for the assembly of rotary compressors, and vacuum pumps for railway braking systems. Administration offices and the drawing office were moved to Springfield Avenue, Chesham, a few miles away and later to a country house at Lindo Lodge, Chesham.

With construction number 3001, the photo shows the first MWD Mk 4 gearbox made at Slough.

In Slough, the acquisition of some adjacent buildings was made and the factory for building more reduction gearboxes to supplement the Lincoln plant.

As setting up progressed in 1942 more machinery was installed such as extra-large lathes, gear cutting machines, a large press and heat treatment among other items. The Mk 8 twin engine input gearbox was wholly designed and built at Slough. It was for a larger size Landing Craft with a twin screw, four engine installation.

An impression of a Landing Craft Tank (LCT) Mk 2

Here is a list of the first five marks of British LCTs of the Second World War. All of the Paxman diesel powered landing craft would have MWD reduction gear boxes, many of these were built by Ruston & Hornsby at Lincoln.

The Mark 4 was introduced in 1941-1942 for the Royal Navy with 865bbeing completed in that time. It was powered by 2x460hp Paxman diesel engines driving two shafts which would have MWD reduction gearbox fitted inline. The craft had a speed of 8 knots and a range of 1,100nm. It could carry 350 tons of cargo or six Churchill or nine M4 Sherman tanks. Armament consisted of either two single Oerlikon 20mm cannon or two single Bofors 40mm guns.

An impression of a Landing Craft Tank (LCT) Mk 4

By mid-1945 production at the Slough plant averaged twenty Mk 4 and six Mk 8 gearboxes per week. The labour at the time was mostly semi-skilled or unskilled both in the machine shop and assembly bay, with some of them already nearing retirement age. MWD/SLM gearboxes were also made in Melbourne, Australia, under licence along with Ruston 6VCBM marine engines. These would become surplus and sent to the UK where there were already customers for them.

MWD boxes lent themselves well to the many tugs, fishing vessels and small coastal ships that were needed immediately post war. The design was good and well proven and they were robust and reliable in service and were virtually standard for Ruston and Paxman engines in such applications for many years.

Many thanks to David Wiltshire for providing the lead on this item and the inspiration to continue with other items that are on the way.

Based for along part of their operations in Slough, from 1910 to 1970 Zwicky produced, among other things, aircraft refuelling bowsers, fire appliances and runway sweepers. From 1937 they began to manufacture pumps and filters.

Zwicky refuelling systems were especially designed to deliver the fuel to the aircraft fuel tanks at a very high rate of flow but safely. 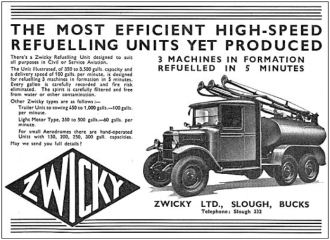 This is an advert for a Zwicky aircraft refuelling bowser from 1936. The advert claims that it can refuel three aircraft at once in five minutes providing the machines are arranged in formation.

The unit had a delivery speed of 100 gallons per minute. The fuel was filtered and free from water and other contamination. Any fire risk due to static electricity was eliminated by the tender design. 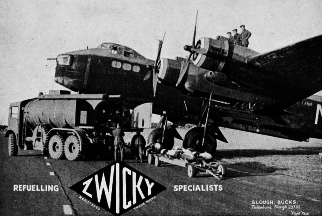 A fine study of a Zwicky bowser and crew refuelling a Short Stirling bomber. The advert appeared at the end 1945 and was almost certainly staged for the promotion. 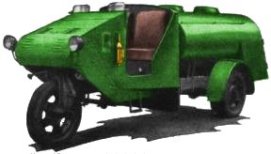 This is a 1937 Zwicky 2x250 gallon air refuelling bowser. This small three wheeler had a tight turning circle so was popular in industrial sites where space was at a premium.

By 1959 the company had become a subsidiary of G and J Weir Holdings Ltd.

Zwicky is a surname that seems to have originated from the town of Zwickl in Bavaria but seems to have spread across the borders of Austria and Switzerland.