The word euphonium is related to the words ‘euphoria’ and ‘phone’. The word ‘euphonium’ could be interpreted as meaning ‘pleasant sound’. I understand this interpretation of the sound of this kind of instrument and how it fits in with the orchestra.

I admit to my ignorance of euphoniums until I met Charley to whom I am very grateful for his patient guidance. 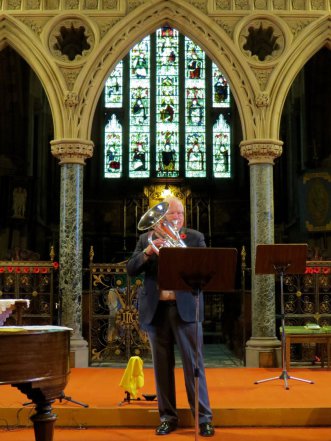 The concert began with the lively Presto from Norwegian Rhapsody by Edouard Lalo (1823-1892). This piece was arranged by Charley Brighton.

The Lark in the Clear Air followed. This is a traditional melody and was arranged by Stephen Roberts (b 1952). I found it contemplative and reflective in a bright and optimistic way.

The Birth of Dawn by Herbert L Clarke (1867-1945) came next and was quite a surprise to me. It had a lively piano introduction and interludes.

The penultimate piece was Romance from Concert for Euphonium by Karl Jenkins (b 1944). On this rather contemplative piece, Malcolm plays the accompaniment on the church organ. 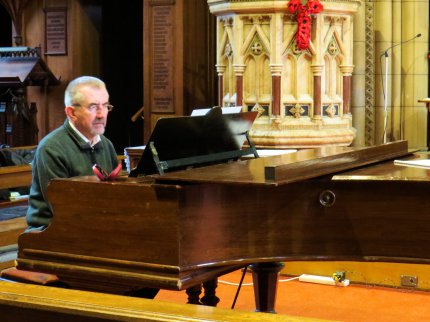 A young Andalusian gypsy girl called Candela is haunted by the ghost of her dead husband. To get rid of the ghost, Candela performs the Ritual Fire Dance which causes the ghost to appear. She dances with the ghost and as they whirl around faster and faster, the ghost is drawn into the fire, making it vanish forever.

Whilst I enjoyed the whole concert this was the piece that stood out for me. It reminded me of Bolero in its tones and the feeling of the movement of the sensual evocative dance. The difference is that Bolero is slow and deliberate and builds in volume and feeling whereas Ritual Fire Dance is is busier and builds in urgency to the sudden point where the ghost is gone.

In the evening I found this piece on YouTube performed by a Polish symphony orchestra and I thought that the fullness of sound would outshine the efforts of Charley and Malcolm but no. the two renditions were just different and I liked both. Here is a recording of Charley and Malcolm’s version: 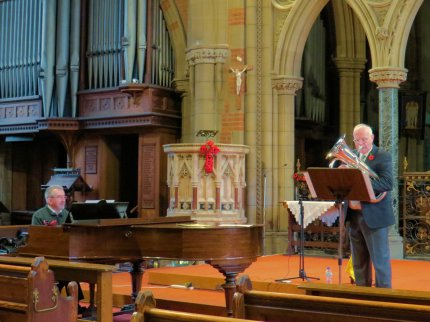 Malcolm Stowell began organ studies under the late Dr Leslie Smith of Eton Parish Church and continued with Alistair Sampson of Eton College. He has been Organist and Choirmaster at St Mary’s Church for the past 30 years (from 2017). In 1990 he founded the series of Saturday lunchtime concerts.

This concert was the 68th Euphonium Recital since the lunchtime concerts began. This represents 370 pieces of music by 232 composers. To learn more about the Lunchtime Concerts at St Mary’s click on the button:

Charley Brighton has been playing the euphonium since he was 11 years old. He now gives tuition in brass instruments and is a conductor. He also maintains the Euphonium Collective Website. To visit the website click on the button: 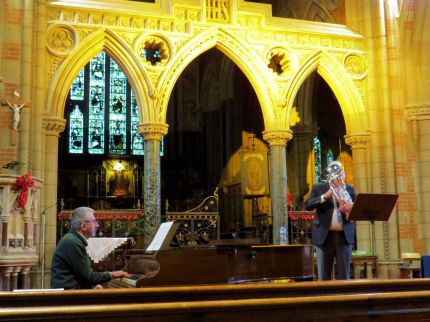 Charley has a collection of 30 tubas and he assures me that they are all individual. He brought six of his collection to the recital and was kind enough to talk me through the general characteristics of each one. 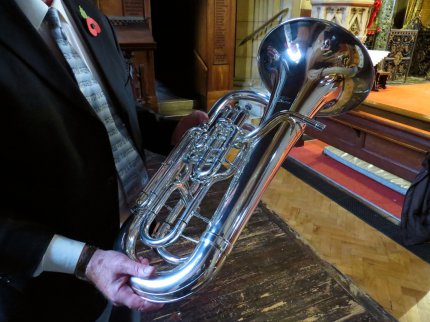 This is a Willson euphonium made in Switzerland in 1990. It is the tuba that Charley chose to play on the days’ recital. 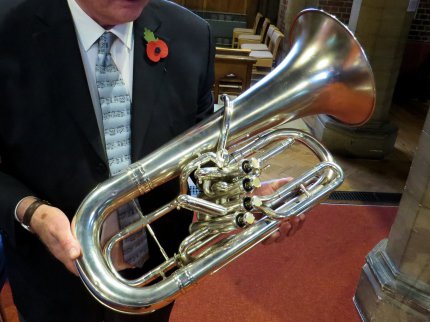 This is a Marzan euphonium also made in Switzerland. It is left-handed and some players may find the transition a little difficult at first. It was made in 1977. I like the tie; well, it had to be said. 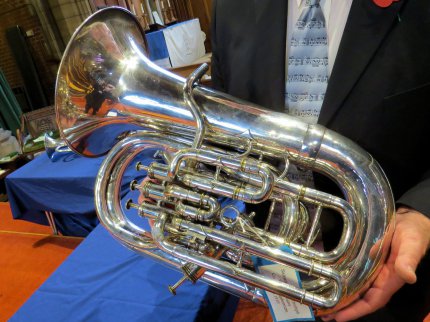 This is a Salvation Army Compact euphonium made in their own works at St Albans in 1910. 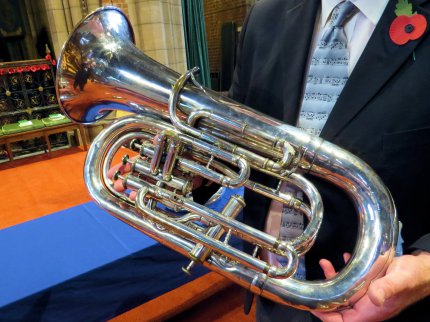 This is a Gisborne euphonium made in Birmingham in the 1930s for the British Army. It has some repairs around the bell. 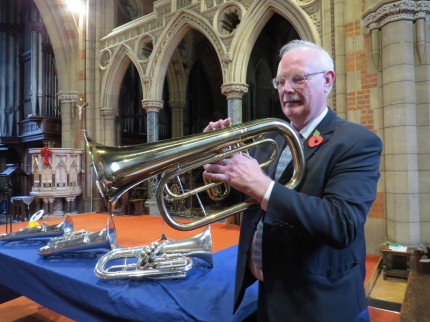 This is a Lafleur euphonium made in the former East Germany in 1966. There is also a larger tuba version which is rested on the front of the shoulder and the mouth piece curves around to the mouth. The whole brass band range was available in this forward marching shape from trumpet and horn down to tuba. 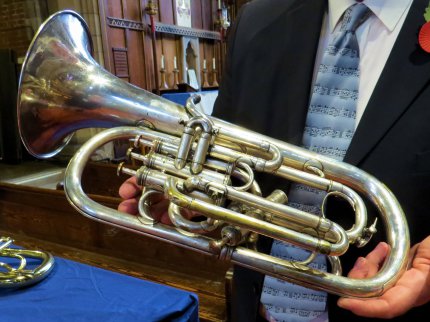 This is a tenor horn from Hawkes of Denman Street, Piccadilly Circus made in 1925. It is unusual in this selection because it is tuned in Eb (E flat) as opposed to the others which are in in Bb (B flat).

Hawkes merged with rivals Boosey and Company in 1930 to form Boosey and Hawkes. The company no longer manufacture musical instruments; instead they concentrate on publishing sheet music.

Many thanks to Charley for talking me through the different kinds of euphoniums and for the subsequent technical assistance that he has afforded me.