Catherine Leonard is a classical concert pianist. To learn more about Catherine, visit her website by clicking on the rose that follows the following reviews.

Note about my reviews: Because of my wanting in familiarity of some classical music, I have relied to a large extent on Catherine’s excellent programme notes.

This first piece I recognised. Beethoven composed thirty-two piano sonatas. He composed this, his fourteenth in 1801 and dedicated it to the seventeen year old Countess Guilietta Guiciardi with whom he was said to be in love. It is a gentle, rather melancholy piece full of emotion and an excellent introduction for me to Catherine's performing style.

In this first recital I would learn that some people can play an instrument by hitting the right notes in the right order. Catherine performs the piano with expressive feeling and it is as enjoyable watch her play it is to listen to her music. 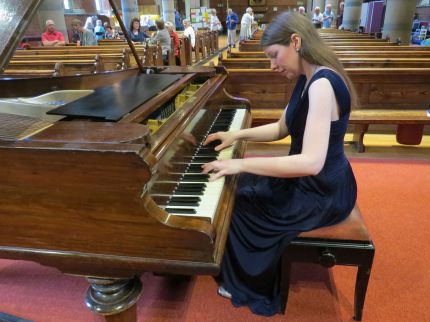 This second piece of the recital I also recognised. Again rather melancholy but I felt it was smoother and more flowing. Catherine’s interpretation and performance was as before. She clearly enjoys performing. 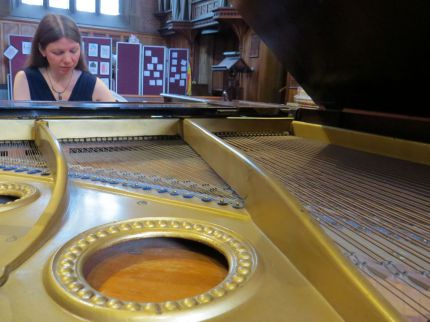 Catherine explains in her program that this piece is sometimes referred to as the ‘Waterfall Impromptu’. She continues in her program to describe the ‘cascading arpeggios followed by murmuring chords’.

The whole recital was very well received by her audience generally. This impromptu was my personal favourite piece of the day. It is joyous and lively I could hear and feel the waterfall. Catherine clearly enjoyed performing it especially the waterfall sequences, smiling as she played each cascading note. 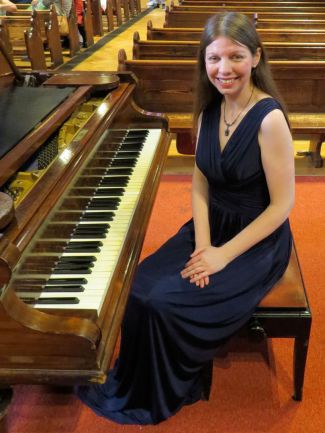 Francois Couperin was an organist and harpsichordist. Published in 1717, Les Baricades Mistérieuses is part of the Sixth Ordre of Couperins second Livre de Piéces de Clavecin. . Catherine wrote in her program that: ‘this piece is, I think, very well suited to the modern piano’.

For this reason I checked out the piece on YouTube played on various instruments such as harpsicord, acoustic guitar and lute. Sadly I couldn’t find a version played on piano. However, as I listened to these different versions it brought back the memory of Catherine’s performance. As I have now listened to the piece played on four very different instruments, I have to say that I couldn’t agree more. The piano has a fuller sound than either the harpsichord or lute. 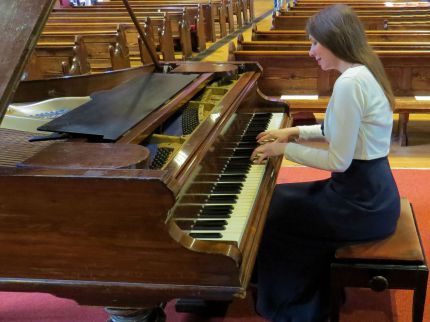 I quite like the harpsichord but not so much as a solo instrument. The harpsichord is classed as a stringed instrument because the strings are plucked. Because of this there is no way to control the sound of each note played. The pianoforte is classed as a percussion instrument because the strings are struck by hammers and so the loudness and sustain of a note played can be controlled by the musician by operating the pedals. This and the fuller sound makes it a far superior solo instrument in my opinion.

When I was much younger I wrote lyrics which, in my head, were set to music. With no band to perform with, I decided to set up a small studio in my bedroom to see if I could make of my lyrics. One particular song I set up my Roland synthesizer to sound like a harpsichord to provide a simple arpeggio to accompany the other modern instruments. It worked very well and I used this technique on some subsequent songs. 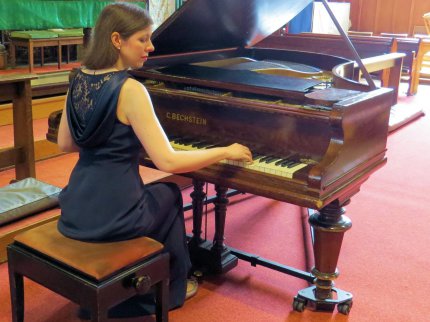 Composed by Liszt in the 1850s, Recollections incorporates various works that he had composed some twenty years earlier. Because of this the piece can seem somewhat disjointed. 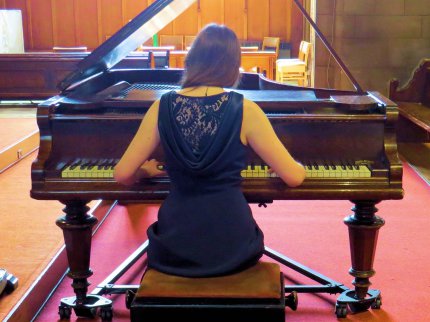 Am Meer (near the sea) from Schwanengesang (Swan Song) in C, S560/4 Sehr Langsam Mit Innigsten Gefühl (Very slow with the most intimate feeling)

Liszt transcribed more than 60 of Schubert’s songs for solo piano. He transcribed Schwanengesang from 1838-1839.

‘Very slow with the most intimate feeling’ is an exact description of this piece. To me the mood of this piece swings from sombre to angry.

Schubert composed his D 946 ‘Three Piano Pieces’ in 1828, just six months before his death. This piece begins with a pleasingly busy section which leads into a more thoughtful section before busying up again for the final

In her program Catherine describes the central section as ‘hymn-like with a section that calls to mind water and possibly even darting fish’. I couldn’t possibly argue with that because I felt it too. 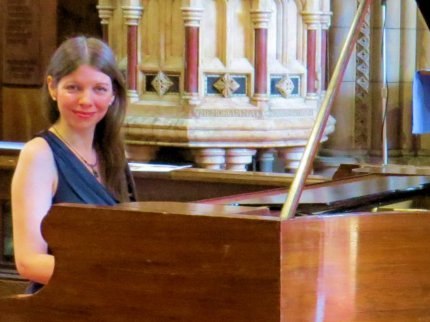 London-based pianist Catherine Leonard studied music at King's College London and piano with Aaron Shorr at the Royal Academy of Music. While at King's she was accepted on to the prestigious Advanced Performance Studies course in association with the RAM after being awarded a First in piano performance. She has also studied piano with Konrad Richter at the Staatliche Hochschule für Musik und Darstellende Kunst in Stuttgart and with Alexandra Andrievsky in London. She has given more than one hundred solo recitals throughout the UK in venues including the Fitzwilliam Museum in Cambridge, the Chapel Royal in Brighton, and Chichester Cathedral. She has also performed at the Harwich and Edinburgh festivals.

By 2017, Catherine had played more than twenty recitals at St Mary's church in Slough. I declare myself to be a bit of a fan Catherine. Her program notes are thoughtful and thought-provoking and her performances are heartfelt. As a person she is modest and graceful. When she performs she is in world that she owns. 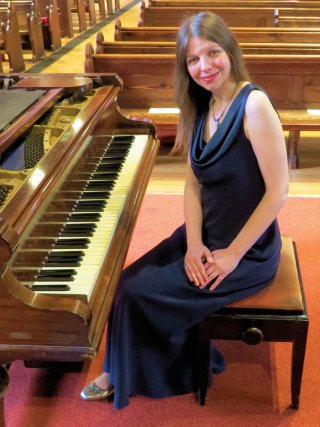 To learn more about Catherine visit her website which, amongst things, has recital venues and dates and incudes links to some of her performances on YouTube, click on the rose below.