There are several attractions such as museums, churches, forts, wildlife sanctuaries etc to visit in Goa. In my short expedition I visited a number of places of but I have highlighted my favourites her. They include the Naval Aviation Museum at Dabolim, Churches at Vehla Goa and Portuguese forts.

The museum lies on the south side of Dabolim Airport and was opened in October 1998 with just six aircraft. It now has twelve aircraft, all very significant and they are thoughtfully placed in the landscaped grounds. Entrance fee was 20 rupees per person and 20 rupees for permission to use a camera. There is a café and shop, a reception which has chairs arranged for lectures and a fair-sized building for interior exhibits.

The building has separate themed rooms that are uncluttered with plenty of information on interesting exhibits. The star here was a large model of the aircraft carrier INS Viraat complete with aircraft, helicopters and a cutaway section to reveal the hangar decks. 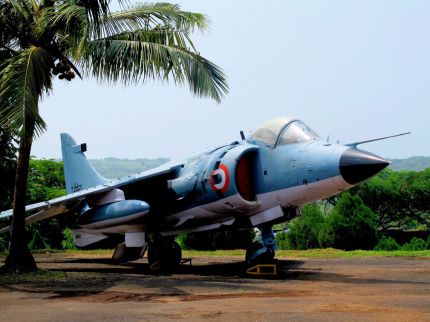 The Sea Harrier was a single-seat carrier borne V/STOL close support and reconnaissance aircraft. The first Harrier flew in 1967 and the first Sea Harrier flight was made in 1978. Used with the 12° ski jump to assist take off on INS Viraat, the Sea Harrier could be loaded with extra fuel or weapons. Sea Harriers of INAS 300 operated from INS Viraat for the last time on 6 March 2016. 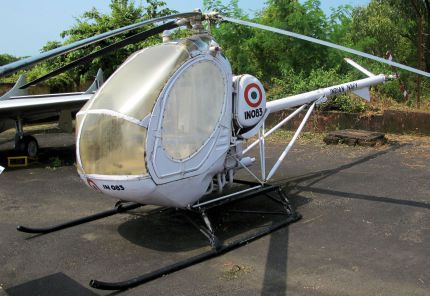 The Hughes Hu300 light helicopter first flew in 1969. Four were procured for INAS-561 for ab-initio helicopter flying training. They carried the registrations IN081, IN082, IN083 and IN084. The Hughes were phased out in the Mid-1980s.

Dimensions      overall length including rotors 30ft 10in; height 8ft 9in

Abbreviations used in the table

Notes on the Chetak

The Chetak is the Alouette III built under licence in India. It was used in many roles including pilot training, SAR, ASW, Ambulance and communications. It had a crew of two and a capacity for five passengers. 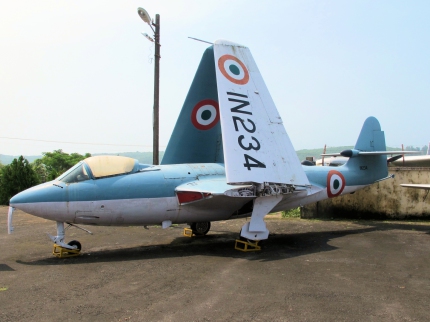 Sea Hawks were effective in the 1971 Indo-Pakistani War knocking out 11 Pakistani vessels including gunboats and merchant ships without losing an aircraft. The Sea Hawk was withdrawn from Indian Navy service in 1983, being replaced by the Sea Harrier.

On the day that Sweetness and I went I had a bit of a cold but I was determined to go somewhere. We packed some lunch and I had a small bottle of vodka to ease my symptoms. By the end of the visit I’d finished the vodka but my throat felt a little dry so I stopped at the café to buy a cool Fanta. I had plenty of money but not very much below a 500 rupee note and the shop keeper was asking for change.

I turned for Sweetness’ assistance but, in a manner to which I am now accustomed, she had disappeared leaving me in a panic. I desperately needed some fluid for my dry throat. Thankfully the shop keeper took my money and found change. Sweetness was sat outside the entrance blissfully unaware of my dilemma and had the cheek to grill me as to where I had been!

My impression of Sea Hawk IN234 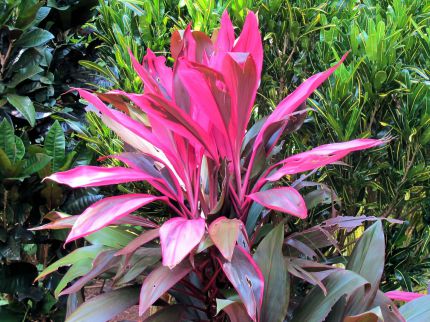 I believe this is a monocot

Tuesday 5 October was a warm morning. On the spur of the moment Sweetness and I decided to visit the Tropical Spice Plantation near Ponda, about 20 miles north-east of Panaji. Sweetness took the Mandovi River road and it was quite a drive, especially with Sweetness at the wheel. 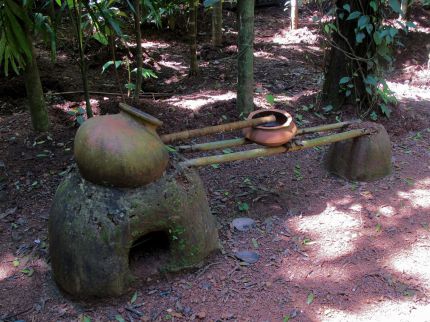 This is a crude distillery used to make feni, an alcoholic drink made from either coconuts or cashews. It’s the favourite drink of Sweetness, she calls it caju. It is iusually 42% proof and in my view, it is such an awful drink that it may be a cure for alcoholism.

Apart from her chosen route, Sweetness had been told by her car mechanic some time ago that she should use ‘Speed’ petrol. Once she is told something like this by an ‘expert’ it is fixed in her brain. She made a bad journey worse by insisting on visiting every petrol station on the way looking for ‘Speed’ petrol but there were none.

I told her several times that it wouldn’t do any harm this one time to use ordinary petrol but would she listen? Of course not. We were in fairly serious danger of running out fuel even though I kept saying that ordinary petrol would be okay just this once her mind was set and all good reason completely absent. 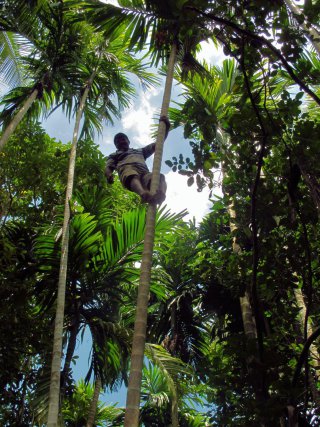 Luckily, at the last petrol station in Ponda, she got the fuel and a man who worked there told us to follow him to the plantation. We would have no chance of finding on our own or by the directions of others who just waved vaguely over one shoulder or the other. From Ponda we followed the road towards the Bondla Wildlife Sanctuary and at some indeterminate point we turned right.

We got there about 10:30 having set off about 09:30. It cost 400 rupees each for which we got a guided tour of a small portion of the plantation set aside for sample species of plants. We were greeted with a garland and herbal tea which I didn’t enjoy. The guide talked us through how various spices grow, what they’re used for and so on. We were given samples to smell and the worst was of course coriander which smells and tastes like soap. 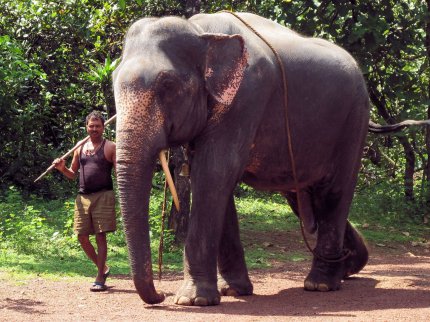 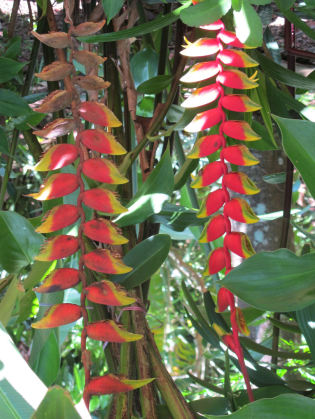 Velha Goa covers an area of just 2 square miles yet it is home to over 30 religious items including churches and statues, all put there by the Portuguese as they took control of Goa. It is a UNESCO World Heritage Site. Even for a neutral such as me it is a place well worth visiting for the sheer spectacle. Incidentally Velha is Portuguese for old.

Church of St Francis of Assisi 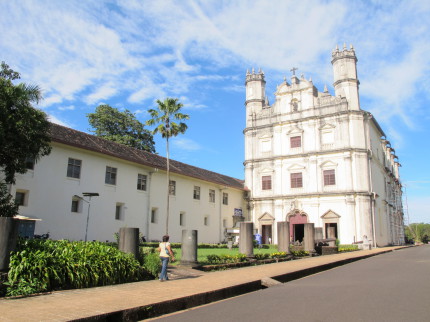 Built in 1661 in a Baroque style for the Portuguese in the Portuguese Viceroyalty of India, the Church of St. Francis of Assisi, together with a convent, was established by eight Portuguese Franciscan friars who landed in Goa in 1517. It is located off National Highway 4, Velha Goa. 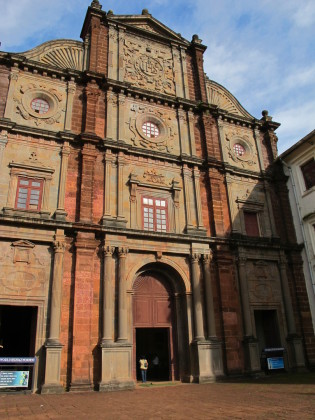 Construction of this Baroque style church began in 1594 and it was opened in 1605. The architects were Julião Simão and Domingos Fernandes. The basilica is 61ft tall. The Basilica of Bom Jesus or Borea Jezuchi Bajilika holds the mortal remains of St. Francis Xavier. 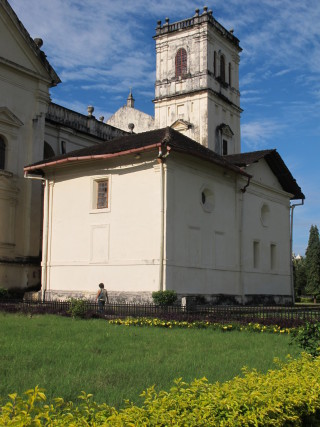 Sé Cathedral de Santa Catarina, is the cathedral of the Latin Rite Roman Catholic Archdiocese of Goa and Daman and the seat of the Patriarch of the East Indies. It is located in Old Goa, India.

The cathedral was built in a Gothic style in 1640 and is 250 feet long. It was built to commemorate the victory of the Portuguese under Afonso de Albuquerque over a Muslim army, leading to the capture of the city of Goa in 1510. 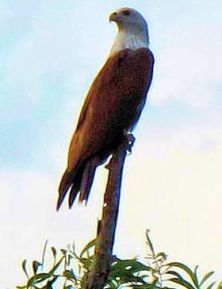 In week 4 Rod took me to Fort Aguada. We parked near to Fort Aguada which has free admission and went through the gate. The path from the car park has sharp stones so wear shoes or boots with substantial soles. Me being me, I wore slippers with thin soles and I suffered. Near the fort is an open space popular with Pariah and Brahminy kites.

Fort Aguada was completed by the Portuguese in 1612 to guard against the Dutch and Marathas. South of Candolim, it was perfectly situated on high ground overlooking the Arabian Sea and the mouth of the Mandovi River. Fort Aguada was the most prized and crucial fort of Portuguese. It is so large that it takes in the entire peninsula in south western Bardez and at one time housed 79 cannons. 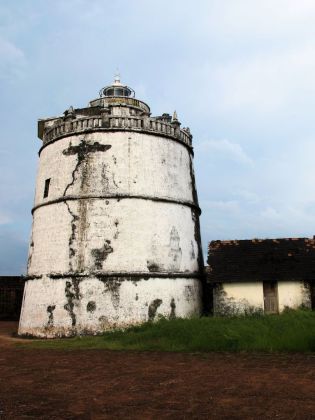 The fort was named because within its walls was a freshwater spring; aguada is Portuguese for water or aqua. This spring not only supplied water to the fort but also to supply Portuguese ships that would stop by. The fort had the capacity of storing 2,376,000 gallons of water, one of the biggest freshwater storages of the time in whole of Asia.

The fort is divided in two parts. The upper part was a fort and watering station, while the lower part was a safe berth for Portuguese ships. Within the fort stands a lighthouse. It was constructed in 1864 and is the oldest of its kind in Asia. It was decommissioned in 1976. 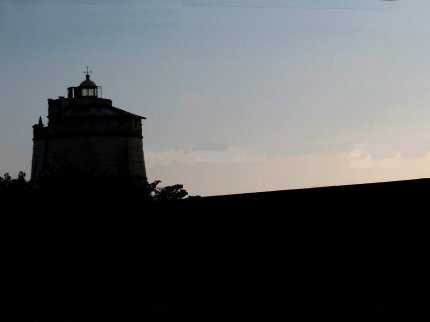 During the Salazar Administration of Portugal from 1932 to 1968, the role of Fort Aguada was changed to prison, possibly for Salazar's political opponents.

A few weeks after my visit to Fort Aguada, Sweetness and I visited Fort Sinquerim. When we left we looked for a bar but the whole area north of the Mandovi Estuary is awful for such places. We saw a bar which Sweetness described as ‘fully empty’ then went home. Sweetness received a call on her mobile that resulted in her leaving while I was otherwise engaged (in the toilet). She left no explanation and you may ask ‘Why I am not concerned or surprised?’ It’s because I know Sweetness better than you. Nothing surprises me anymore. 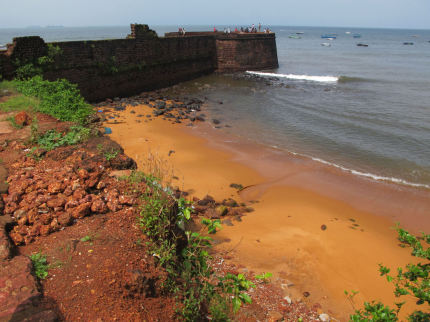 Fort Sinquerim on Sinquerim Beach to the north-west was a supply port for Fort Aguada.

Bardez in North Goa yielded to the Portuguese in 1543 but the territory continued to be threatened by several enemies. These enemies included the Bahamani from the north, the Maratha from the east and the local chieftains in the area itself.

The Portuguese built a series of fortifications including the one in Chapora. It was constructed in 1617 on the site of an earlier Muslim structure only five years after work began on Fort Aguada. 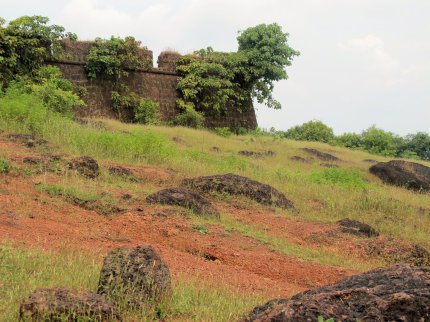 Fort Chapora was built of laterite, a rock type rich in iron and aluminium. The iron oxide content gives it a rusty-red colouration. The walls were not particularly tall as it was built on high ground which commands views in all directions and has steep slopes on all sides. It was intended as a border watch post.

In 1684, the Portuguese troops surrendered to the Maratha ruler, Sambhaji. The locals conflicted with the new rulers and in 1717, the Marathas withdrew their force. The Portuguese came back and rebuilt the fort. The new structure of the fort was equipped with underground tunnels to give a safe getaway in case of an emergency. 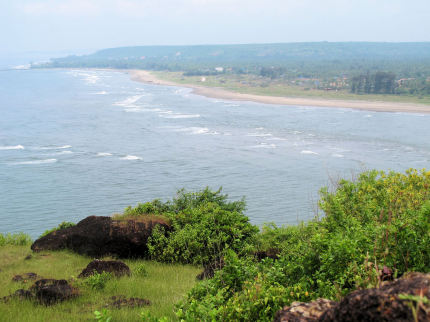 Now the fort lies in ruins. It is still possible to see the heads of two tunnels that formerly provided supply routes for besieged defenders. There is also a scattering of Muslim tombstones on the southern slopes of the hill, believed to be relics of pre-colonial days. 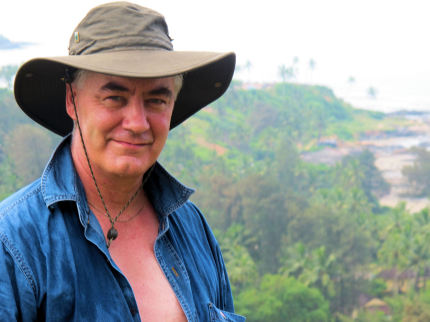 Okay, it was just a hill but it was a damned steep one