At 17:15 on Monday 6 September, Sweetness’ son and family came to collect us from my house to take us to Heathrow Airport. I had already disconnected the car battery to preserve its charge but I still insisted on a quick check around the house. We left at 18:00 and arrived at Terminal 4 at 19:45 and checked in the baggage for the hold. We said our goodbyes; Lucius gave a grown-up handshake and Megan surprised me with an affectionate hug.

Check in was long but went smoothly and the flight took off on time at 21:00. It was raining as we left. The video screens in front of us didn’t work properly at our seats but we settled in to the flight. We were served with Chicken Chasseur and Jack Daniels. Sweetness slept during most of the flight but I only managed only about 10 minutes. I spent most of the night looking down at the street lights of small towns. That’s to say they looked small from up here. 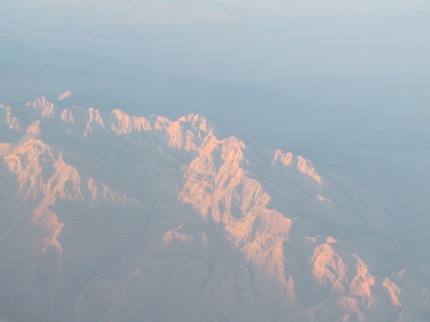 In the early hours of the following morning, the sun began to rise and we were over some mountain deserts in the Middle East. It was completely spectacular, desolate and unwelcoming all at the same time. It was Iran. 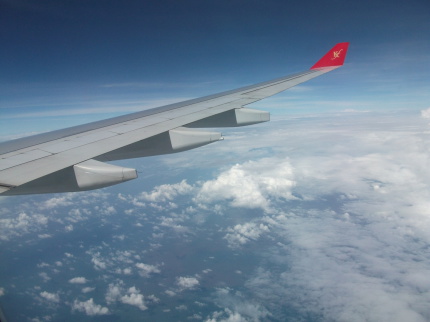 Some more hours later we were dropping down over the slums of Mumbai. Apparently blue tarpaulin to cover their shanty town dwellings is very popular among the poor. Mumbai, the capital and richest city in India, had it in abundance. 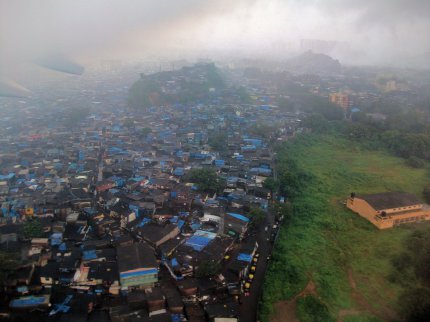 We landed at 11:00 local time. We had to collect our baggage and then check it in for the domestic flight to Goa. We took a bus ride across the airport to the other terminal. As we went we saw what I later discovered were house crows and pariah kites.

In the airport terminal, in order to make things easier, Sweetness held the documents while I handled most of our luggage. This would have worked out brilliantly with any other travelling companion but Sweetness.

She managed to dessert me and disappear three times leaving me lost and alone in a foreign airport with officials demanding my documents, all of which were in her possession.

This was in spite of my ordering her to stay close on each occasion. Life with Sweetness is going to be just as difficult in Goa as it has been in England. When I see her son Rod, I’ll ask him to get me a child harness or, better yet, a strong chain to keep control of her. 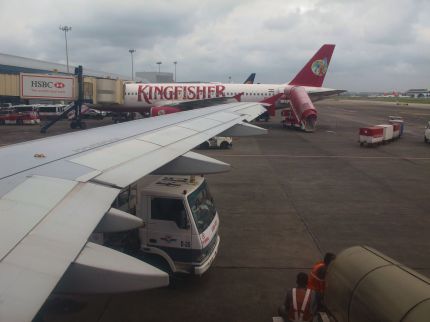 The domestic flight to Dabolim Airport, Goa, left on time at 14:40 and the trip was short. The smaller Airbus A320 (VT-KFK) was more prone to turbulence than the A330 of the international flight and we did have a sudden drop in altitude soon after take-off.

We landed at Dabolim which is actually a land base for Indian Navy aircraft. We taxied past some military aircraft, mostly Soviet-built such as Mig-29K fighters. We got through the airport quickly with the help of an unofficial baggage handler to whom Estala paid a tip of 50 Rupees (less than £1) for his trouble. We met Rod outside the terminal building, loaded the car and I rode shotgun.

First we had to negotiate a set of traffic lights which went much as expected: you wait on red and go on green. I was to find that from this point on, all order on the roads would end for the rest of the expedition.

Rod used his car horn more times in that few miles than I had in thirty years of driving in Britain. Whenever he tooted at a car or van the response was that they moved over and waved us past. The traffic seemed to flow in spite of there not being regard for any kind of system and yet there was very little anger and not the slightest hint of road rage. It’s as though there’s an acceptance amongst Goan road users that ‘we’re all as bad as each other’. I expect if I go to a bookshop and ask for a copy of ‘The Goa Highway Code’, I’d get a laugh, a blank notebook and the suggestion to ‘fill it in as you go’.

Of course the authorities do their worst; they place signs announcing ‘accident black spot’ every mile or so as though the signs will make a difference. If there is a portion of road where there isn’t a sign it’s just because they haven’t put it up yet.

Along the road we passed many broken down and apparently forgotten remains of shacks. Pedlars were trying to earn a few coins to scratch out a living. One guy was selling cheap inflatable children’s pools with seemingly nothing but hope and obviously a fit set of lungs. He must blow each of his goods up and deflate them every day. As for the hope, I was wrong because amazingly he also had a customer! I clearly had a lot to learn about commerce in India.

Reflecting on the journey which started yesterday at London Heathrow’s Terminal 4, where, without looking too hard you could probably buy a designer clutch bag at a duty-free knock-down price of four thousand pounds. Here at the roadside in Goa if you have a couple of scaffold poles and a piece of blue tarpaulin – you have a thriving business!

When we reached Sweetness’ apartment block, I met a semi-stray dog in the compound. She was in a dreadful state of malnutrition. I squatted to stroke her and said

I looked into her eyes as I stroked her and said:

‘So your name is Rani; that means princess doesn’t it?

Rani looked back forlornly and as se didn’t disagree I took it that her name did mean princess. I continued stroking her. I could see let alone feel her ribs and when I stroked her right hind quarters, she winced.

‘You’ve been hit by a car or something haven’t you?’ I said ‘I’m going to look after you Rani. I’ll give you scraps from my plate and I’ll even go without food if I have to.’

Rod laughed ‘You’ll never make a friend of her.’

‘Watch and learn,’ I replied. 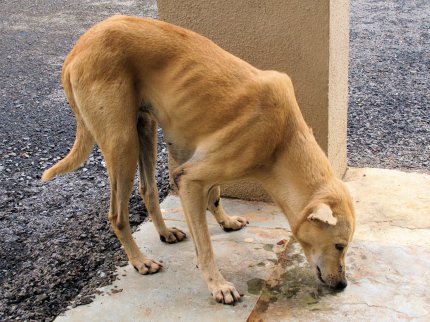 Later, Sweetness went out as did her servant Laxmi. Rod went out saying as he left ‘there’s more Coke in the fridge if you want it.’ Left alone, I settled into my work, recording the events of the day on my computer.

After some time I felt a little thirsty so I went to the fridge, took out a Coke bottle and poured half a glass. I put it to my lips to take a swig and spat it out immediately wondering ‘who on earth would put soy sauce in a Coke bottle and not elabel it?’ Then I remembered where I was: Sweetness’ apartment. Life with Sweetness is going to be much more difficult in Goa as it is in England.