Note: There may be some suggestions for recipes on any page on this website. Neither I nor any contributors are qualified chefs so you try the recipes at your own risk!

Goan cuisine has been influenced by its Hindu origins and fused with 400 years of Portuguese colonialism. It has a progressive international culture continually being influenced by the outside world via the tourism industry.

Goan food near the coast is generally based on seafood caught fresh from the sea or fruit picked from trees on the day. Fresh seafood, coconuts, fresh fruit, rice, and chicken are important main ingredients. Portuguese influence comes in the form of the introduction of potatoes, tomatoes, pineapples, guavas, cashews and chilli peppers from Brazil. For Christian Goans beef and pork are also available.

Inshore seafood includes mackerel, sardines, pedi (a fish of the herring family), prawns and crabs. At the coast it is all freshly caught and sent to market early in the morning. Crabs are sold alive and so don’t carry a sell by date. 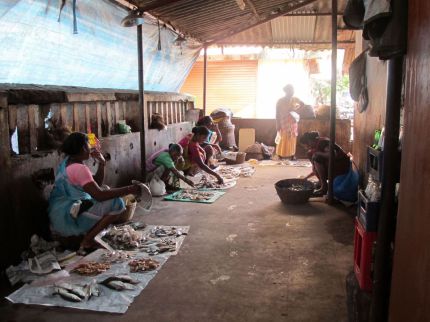 A local fish market. The seafood here was brought ashore within the last hour or so. 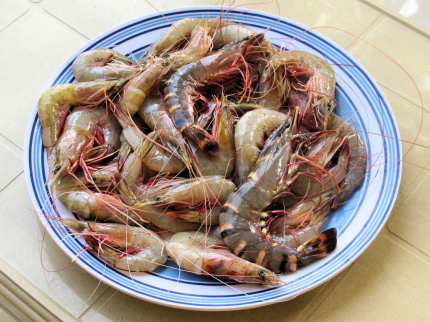 A couple of tiger prawns among this plateful of king prawns fresh from the market. Prawns are a good source of omega-3 fatty acids and gives 0·12g per 100g serving if that means anything to you. It sounds good to me but what do I know?

Mackerel is an oily fish and a rich source of omega-3 fatty acids which are important for the metabolism. Mackerel gives 1·65g per 100g serving. The texture of the meat of mackerel makes it suitable to make very tasty fish burgers. 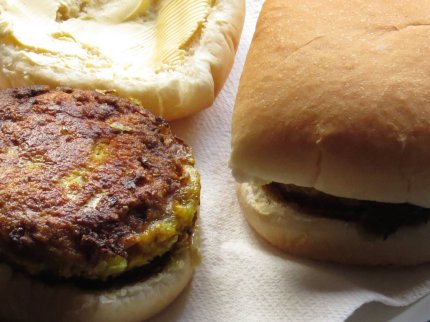 It is usually better to use the freshest ingredients. My girlfriend constantly reminds me that you can’t get fresh seafood in Slough like you can in Goa. I reply ‘Slough is sixty miles from any coast, your apartment isn’t even one mile from the sea!’

I used a 125g tin of mackerel which I drained thoroughly. An advantage to using tinned mackerel is that it doesn’t have to be descaled, cleaned and prepared.

Place four non-stick egg rings each onto four pieces of grease-proof paper and sieve some flour into the rings. Divide the mixture into each of the rings. Place them into sandwich boxes and put in the freezer. Fry from frozen and serve in a buttered pao or soft roll.

Sardines are rich in B2 and B12 which are important for the nervous system. They are also very rich in omega-3 containing 1·94g per 100g. They can be grilled, smoked pickled or canned. 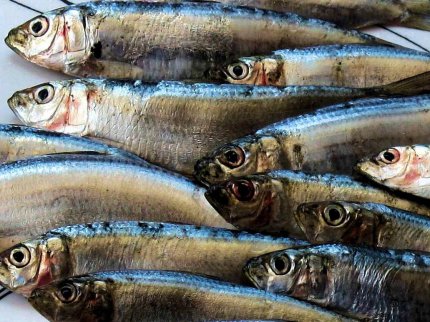 Sardines only an hour or two after being caught

Take 10 fresh sardines, descale and clean thoroughly. Marinate with a spoon of salt for ten minutes then rinse thoroughly three to four times. Chop 2 large onions, slice 2 large salad tomatoes and slice 2 potatoes. Put in a pressure cooker with one layer of onion and tomatoes, one layer of potatoes and one layer of three sardines.

After finishing the layers pour 4-5 spoons of tomato sauce along with 3 spoons of olive oil and two spoons of water. Finally add a pinch of salt. Cover the pressure cooker and put on the heat. Let the whistle blow three or four times. Serve with bread rolls of your choice.

Many fruit are important to the Goan diet especially pineapples, mangoes and bananas. Fruit is grown everywhere so is very fresh at the market. The Portuguese introduced potatoes, tomatoes, guavas, cashews and chillies from Brazil and all of these ingredients have become important in Goan cuisine. Vegetables important in Hindu cuisine include gourds, lentils and pumpkins. 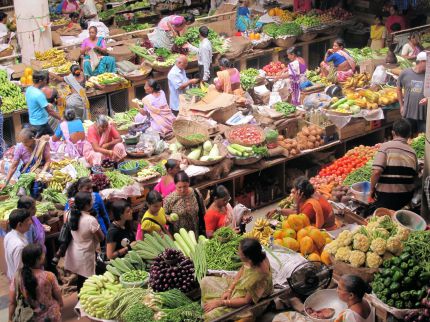 A fruit and vegetable market in Panaji

India as a whole produces nearly 17 million tonnes of bananas accounting for 2·8 per cent of the country’s agricultural GDP and contributing 37% of all fruit production in India. 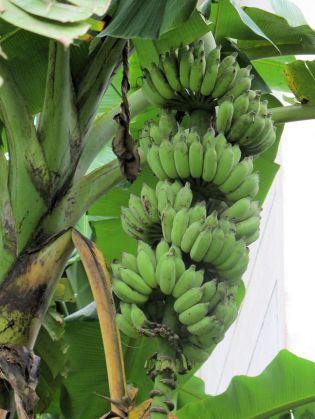 The fruit grows all year round. Banana leaves are large, flexible, and waterproof and are often formed into disposable dishes or plates to serve food.

Basmati rice is my favoured rice when cooking savoury dishes. It is a long grain rice and has a number of varieties both brown and white. The name Basmati is derived from the Sanskrit word vasmati which means fragrant. It certainly is the tastiest and twice as nutritious as short grain rice.

I am not a purist and I will choose basmati for dishes from other cultures such as Mexican chilli con carne, Chinese sweet and sour pork and all other non-sweet dishes etc. India is the largest exporter of Basmati rice having about 65% of the market. 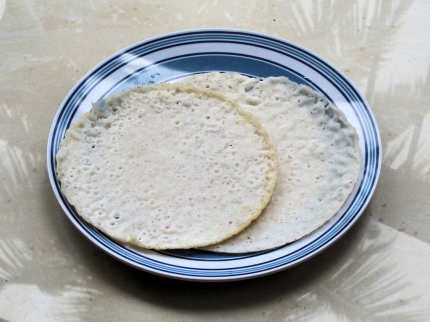 Daniel and Shankar are dealers in coconuts and they came one day halfway through my expedition to harvest coconuts from the palms in the apartment compound. Daniel, who is known as a toddy tapper, climbed six palms out of the dozen or so there to pluck the coconuts while Shankar cleared up. I mucked in too. The work took most of the morning. 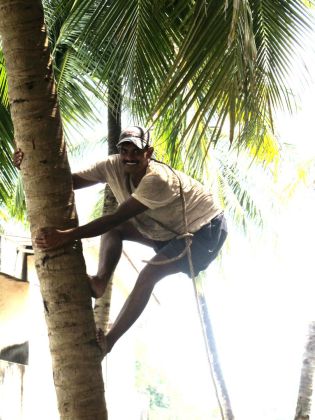 I chatted with these guys who have intelligence in abundance and could do anything they wanted but as toddy tappers they were the happiest people I have ever met. All I can say is good for them. 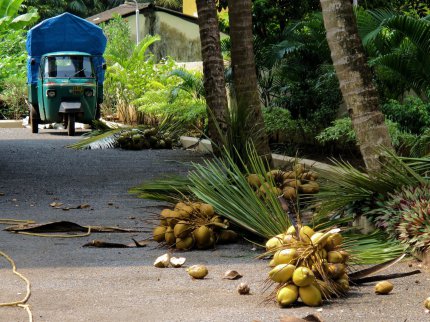 The trees belong to Sweetness and when the work was done the ‘toddy tappers’ pay for the coconuts that they take and then sell them at the market. Negotiations ensued and Sweetness retained a good number for herself to give to family and friends. The coconuts are ready for plucking maybe every three months or so. When Daniel and Shankar left the back of their tuk-tuk was overflowing.

Coconuts are an important part of the Goan diet as well as the economy and around 40 million are consumed by the people of Goa each year. It is a daily source of food and is used in a variety of dishes especially seafood and chicken curries and other savoury dishes. It is also used in sweet dishes and drinks such as smoothies.

Ginger garlic paste is a very tasty and versatile ingredient. It can be used as a marinade or within burgers and other foods. It goes especially well with chicken, fish and vegetables and there is no definitive recipe so you can adapt it according to taste or time available to make it. It can also be bought ready made in a jar or packet. 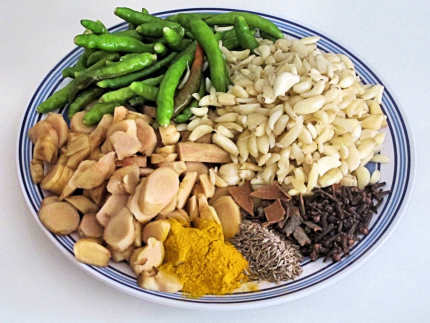 Ingredients for ginger garlic paste as made by Sweetness

This hotel is above a cove near Dona Paula and has indoor and outdoor places to eat. The outdoor restaurant is our favourite place to eat. It’s a beautifully presented complex and even the walk down to the restaurant is quite magical. At the bottom is a perfect lawn and the restaurant is on the seafront. There is a swimming pool and a plethora of palm trees. The beach is sandy but has lots of seashells washed upon it.

Sweetness ordered while I took some photographs. We had beef chilli fry with mixed fried rice which included chicken, prawns and vegetables with chapattis. Not something I’d prepare myself but it was very nice and reasonably priced. We’ll visit this place several more times during this expedition I am sure. 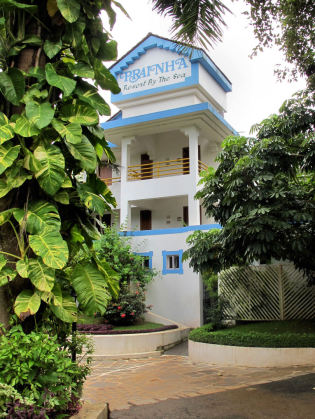 I was right. Apart from coming here just for the occasional ice cold Kingfisher lager we had two more meals. For the second meal I had pork vindaloo which was tasty but also very hot.

The third meal was disappointing. I had a Hawaiian chicken salad which was very well presented but quite bland in taste. The pineapple fresh or sweet enough.

Our favoured drink in a restaurant at lunchtime was Kingfisher lager. It’s a litle watery but it is always served super chilled and therefore refreshing in the heat. It has a stated strength of 4·8% alcohol by volume.

When a waiter serves the beer he always presents it as though it’s a fine wine. They must have seen this on TV or something and think that it is normal practice with any bottled drink. It is quite amusing but the way I dealt with it was to give a cursory glance and say ‘fine, thank you’. All I’m really interested in is that it is dripping with ice-cold condensation.

On our first visit we had chicken-stuffed papad appetisers and a beer for just 200Rs. The food was delicious and the Kingfisher lager was ice cold and refreshing. We then went home for lunch.

We had a couple of alleged ‘pizzas’. They were covered with a creamy goo which I assumed to be an attempt at cheese, neither had tomato or tomato purée but one of them did have a taste of onion. If this had been a home delivery I would have eaten the cardboard. I wolfed down my share for no other reason than I was famished. To be fair to the pizzas, which were very, very desperate attempts at cuisine, I wasn’t hungry when I finished. 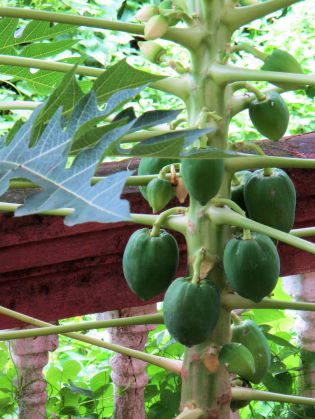 This version of chicken curry, which I developed in England, was inspired by the flavours of Goa, particularly pineapple and coconut. I prepared it for Sweetness and her younger son Rod and he commented ‘that’s the best curry I’ve ever had.’ 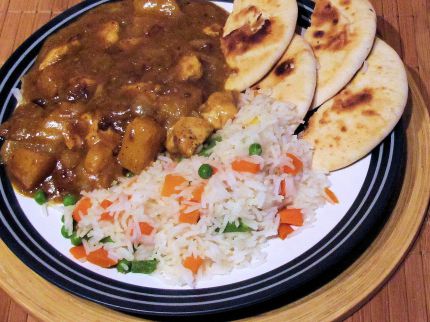 Season the chicken breast with salt and freshly ground black pepper and fry using a little oil in a wok until sealed and browned.

While the chicken is cooking, boil water in a pan. Add Basmati rice and season with salt and simmer for about 12 minutes. Boil some water in a kettle ready to rinse the rice. Add the mixed vegetables to the rice 5 minutes before serving.

I prefer plain naans so that I control the flavour. Lightly toast the naans and spread garlic paste to your taste. Mix chopped chives with grated mature cheddar, sprinkle on the naans and grill.