From the Spanish or Portuguese meaning ‘little fly’, mosquitoes go through four stages in their life-cycle: egg, larva, pupa, and adult. Eggs are laid in standing water such as salt-marsh, lakes, and puddles or even in a bucket. The first three stages are aquatic and last 5–14 days, depending on species and ambient temperature. The adult mosquito emerges from the pupa as it floats at the water surface. Adults live for 4–8 weeks. 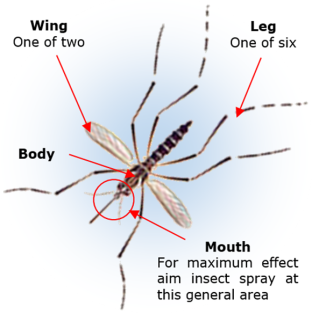 Both sexes feed on nectar and plant juices but the females of some species need blood meal for the nutrients to produce eggs. Prior to and during blood feeding, they inject saliva into the body of their host. This saliva is an anticoagulant – without it, the female mosquito's proboscis would become clogged. On the victim the saliva negatively affects vascular constriction, platelet aggregation, angiogenesis, and immunity and, if all that wasn’t enough, it creates an irritating inflammation.

Mosquitoes are attracted to a victim’s sweat if it contains high proportions of carbon dioxide, octenol and other compounds that make up body odour. This can make non-natives from cooler climates particularly attractive targets since they are prone to sweat more in the heat. I am a bulky white man from Britain, a prime target.

Distribution of malaria in the world 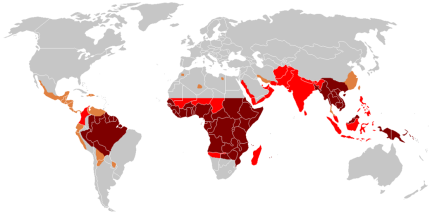 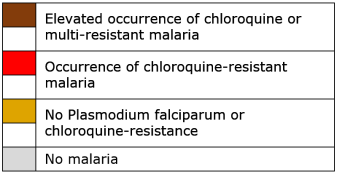 Deaths due to malaria in World in 2012 in Millions 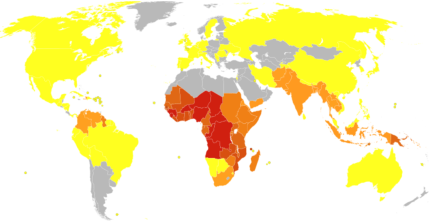 Maps and data adapted from Wikipedia

I usually try to make light of these sort of thing but there isn’t anything funny about suffering mosquito bites. The principal mosquito borne diseases are the viral diseases yellow fever, dengue fever and Chikungunya, transmitted mostly by the Aedes aegypti, and malaria carried by the genus Anopheles. The Anopheles mosquito can fly for up to four hours continuously at up to 1 mph traveling up to 7 miles in a night.

According to an episode of the BBC TV programme Qi as well as other sources, half of the humans that ever lived on Earth died from diseases contracted by mosquito bites. According to the Goan newspaper The Navhind Times, estimates on the deaths of people in India caused by mosquito bites may have been historically under estimated by a factor of up to thirteen. This being due to inaccurate diagnosis by doctors and poor anecdotal evidence being given by friends and relatives of victims.

In my indomitable battle against these little swine I have added a new and deadly weapon to my armoury. It is Mortein® Powergard™ All Insect Killer spray ‘The power of 2 cans in 1’ and it is extremely effective. With just a couple of short bursts, a cockroach will become immobile immediately, on its back with legs flailing. It’ll be dead in a minute. The thing that scares me is that so driven to madness by these pests that I have become completely callous in my attitude towards them. War is hell!

Last night, without any training or any kind of instruction I killed a cockroach that had scuttled out of reach under an armchair. Today my victim was a mosquito fat with blood but within seconds of three sharp direct sprays it fell to the floor. Somebody stop me!

Here are some of the weaponry, defence and remedies that one should consider in the battle against the household pests in this part of Goa:

Odomos Cream – applied to the body helps deter mosquitoes but is not pleasant to have on and I didn’t like it.

Coils – burn for up to eight hours and kill pests but are unpleasant.

Swatter, broom or newspaper – are effective if you’re quick enough and an excellent way to let off steam.

Mortein insect spray – is effective against all insects. Periodically I would spray liberally under the bed and other furniture to kill any cockroaches that may have scuttled under there.

Betnovate cream – applied to bites can help to relieve irritation, so the manufacturers claim.

Smoke – around the coast especially, the locals build bonfires even on the hottest days and these fires are designed to create smoke which helps to drive the mosquitoes away.

Ceiling fan or air conditioning – these systems can help reduce the smell of sweat which attracts the mosquitoes to the potential victim. It’s a deterrent; but if the mosquitoes find you, you will be bitten.

This count was done before the end of my expedition. The estimated total is a simple multiplication of the number of bites per day by the number of total days. It revealed a bite rate of 5 every two days hence an estimated 100 bites for the duration.

A few years after my expedition to Goa, I asked a friend of mine who is from Mauritius and returns to the island fairly frequently, what precautions she takes before going.

'Before I travelled I would take Soluble Aspirin 75mg daily for 2 weeks. Now I don’t need to do that because I swallow a Vitamin B complex every day. By the way, the mosquitoes on Mauritius are not considered deadly; they are just annoying.’

Please note that this is one individual’s solution for herself. I have an implicit regard for my friend and she is a health professional. Her solution might not suit your own constitution and you should certainly seek advice from your own health professional before taking any medication. Neither my friend nor I can accept any responsibility for anyone’s decisions in treating this or any other problem.

The comment about mosquitoes on Mauritius not considered deadly is correct. There are many different kinds of mosquito in the world and not all carry the deadly diseases. This is probably true for at least most of Goa, as well as Mauritius, as it is influenced by air from breezes from the Arabian Sea or Indian Ocean from the west. The state is largely protected to the east by the Western Ghats, a long range of mountains that run close to most of the western side of India.

The word ‘malaria’ was applied in the 18th century and comes from the Italian mal’aria meaning ‘bad air’. This refers to smell of stagnant marshes to which the disease was formerly attributed. There are times that when I wonder about the intelligence of our ancestors. How did they not see the bite marks on a victim’s body? Three of the mosquito bite scars on my body remained for six years. 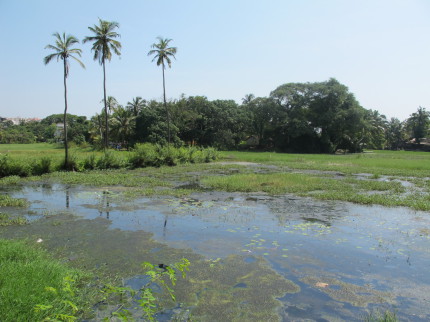 A view from my girlfriend’s apartment. Idyllic as the scene might be, these wet paddy fields provide the perfect breeding ground for mosquitoes.

The incubation period between being bitten and symptoms occurring is usually one to two weeks, depending on the specific parasite a person is infected with, but in some cases it can take a year or more for symptoms to develop. I believe I have malaria and in my experience I have very little warning of the onset of an attack, about 20-30 minutes. If I’m out I have to get to the safety of my home as quickly as possible. The attack itself may only last a week or so, but the after effects may go on for two or three weeks.

My symptoms during a malarial attack usually includes:

These symptoms usually last for a week or so and more than match those explained and listed on the NHS website and other reputable websites from around the world. I suffer them periodically and an important point is that the symptoms finish as mysteriously as they occurred. I understand that malaria can stay with you for life and that after each attack it mutates and disappears from the immune system until the next attack. During each of these periods I am effectively housebound.

NHS website states: ‘Seek medical advice  IMMEDIATELY if you develop symptoms of malaria during or after a visit to an area where the disease is found’

But what if the required support is not forthcoming? For some reason my doctor did not appear to accept the possibility that I may have malaria. In a request for a blood sample in 2017, she didn’t include testing for tropical diseases in spite of my testimony that I had 87 confirmed mosquito bites with an estimated total of 110 bites. It took a while to check the blood sample report as I don’t understand medical terms.

My doctor came to her diagnosis from an 8 minute consultation in the surgery and later a telephone consultation. I have a serious condition which is ruining my life. Looking at the addendum below it is clear that my condition is deteriorating and that time slots where I am able to keep appointments are shrinking.

This report is based on the personal experiences of mine along with research from several respected sources from around the world. I have also considered anecdotal evidence from close friends who are either sufferers of malaria themselves or have close family or relatives of their own who have suffered the condition.

It is important that throughout my research I didn’t limit my work to malaria. I considered other possible causes relating to stress, diet, lifestyle, alcohol and others but none matched the range of symptoms that I suffer except malaria. It doesn’t mean that I have come to a conclusion but I have had 87 confirmed mosquito bites as part of an estimated 110 bites in total and I am suffering symptoms as listed above.

There a philosophical thought known as the ‘Duck Test’. It goes like this:

This is a form of abductive reasoning. The test implies that a person can identify an unknown subject by observing that subject’s habitual characteristics.

Yearly reports on days out of action due to malarial attacks.

Start day of attacks is given with the subsequent days lost including the recovery periods.

Start day of attacks is given with the subsequent days lost including the recovery periods.

‘Days out of action’ or ‘days lost activity’ means effectively housebound either due to attack in progress or too weak due to poor nutrition.