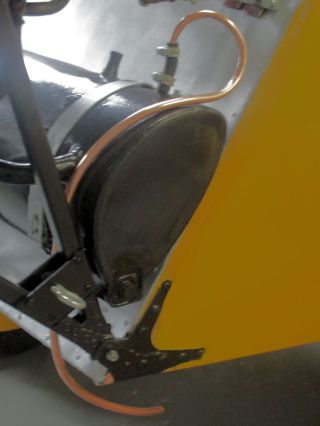 This component on the Gypsy Major engine on the Magister was manufactured by Maurice using copper tubing. He filled the tube with salt, crimped the ends and gradually formed this amazing shape applying heat as necessary and patiently forming the copper without causing any kinking.

The thing that makes this achievement remarkable is that copper is prone to kinking while it is being bent, but Maurice found out how to do it via the internet. The shape is three dimensional, that is to say it isn't on a single plane, and he got it right first time. 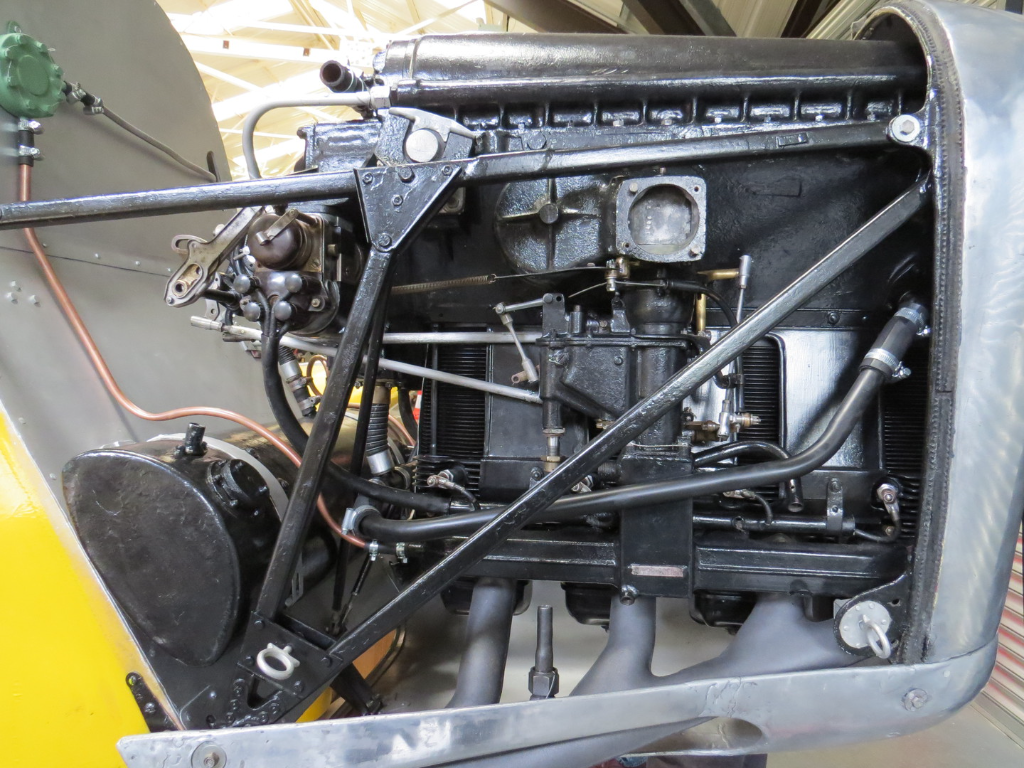 In the left of the photo another example of bending copper tube, this time by Andy. The purpose of the tube is to convey tube is to supply a vacuum to operate the flaps.

The piece of black tube about a third of the way up the photo was by Maurice and Andy. It is another piece that has a three dimensional quality, ie: it isn’t formed in a single plane. Again they did it in one go. 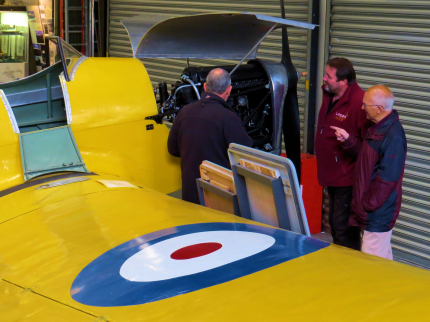 Maurice, Andy and Tony B contemplating the Magister engine. 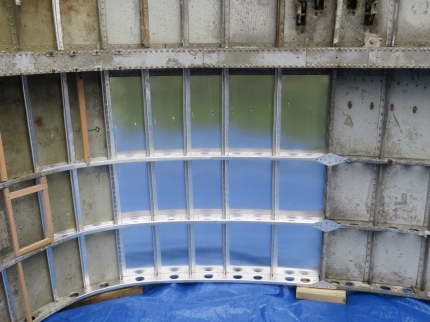 The shiny section along with the strengthening spars on the Marthon roof section had to be handmade by the volunteer engineers. The work is very accurate and has the added complication of the curved shape of the left-hand ends of the spars.

Volunteers involved in this part of the project have included: Graham, Dennis, Mick, Ted and Andy. 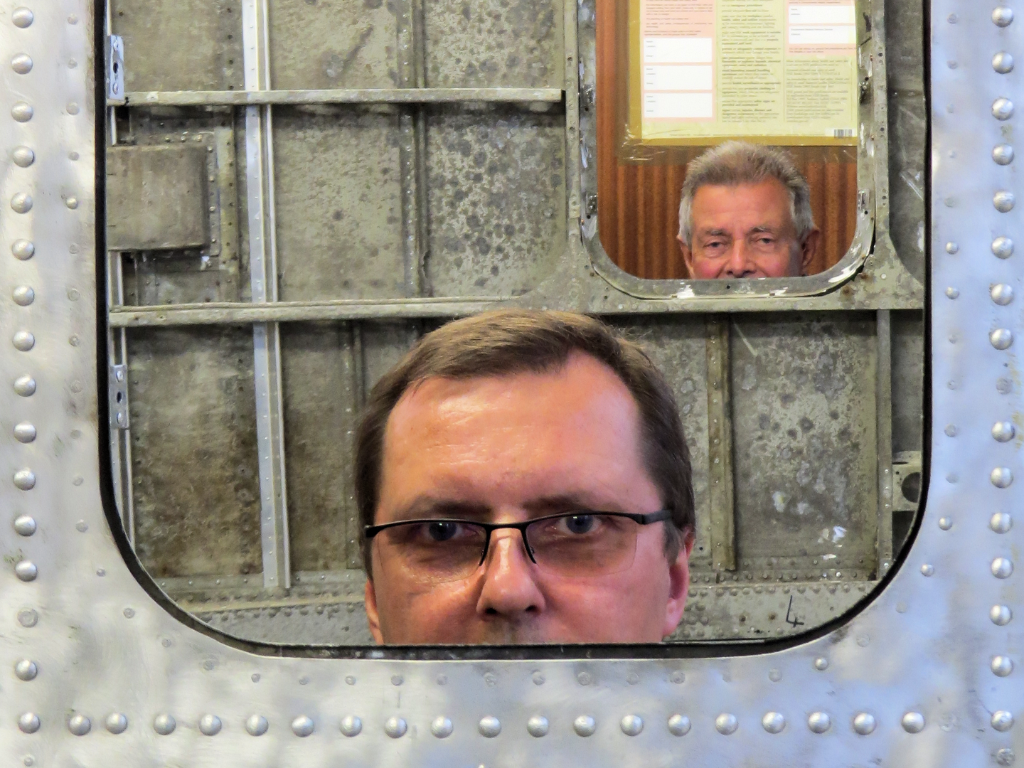 Graham has spent a lot of time working on the fuselage section of the Miles Marathon is looking rather furtive. Dennis in the background also spent much time on thiis and is looking equally furtive.

The Gannet had been neglected for a couple of years so as not to disturb bee colonies taking up residence. The front fuselage and number codes on the Gannet were finally repainted during the summer 2016. 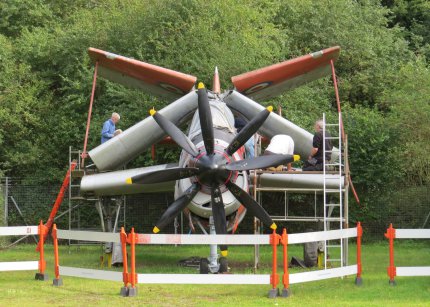 The nose wheels were refurbished by Maurice during early autumn 2016. The hubcap on the port side is coloured red in line with navigation lights. I don’t believe that this was necessarily an official naval requirement but it seems it was applied to aircraft of some units. 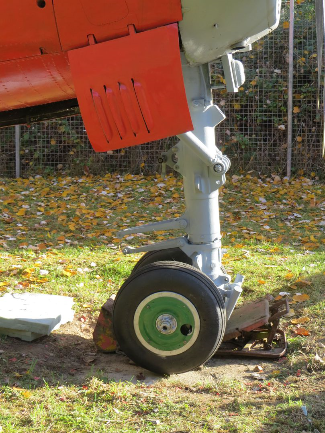 Nose wheel on the starboard side

Originally propellers were made of specially selected wood but from about 1940, solid steel propellers were made for military use. A modern propeller blade is made from a heat-treated aluminium alloy compressed into the required shape. The aluminium is strengthened by creating an alloy that may contain copper, manganese, magnesium, silicon or chromium. The general shape of the aluminium alloy propeller is similar to the wood propeller, but the sections are thinner so they cut through the air more efficiently.

The propellers on the Gannet are made of an aluminium alloy and after time corrosion can occur. The corrosion causes the material to expand into what look like layers. 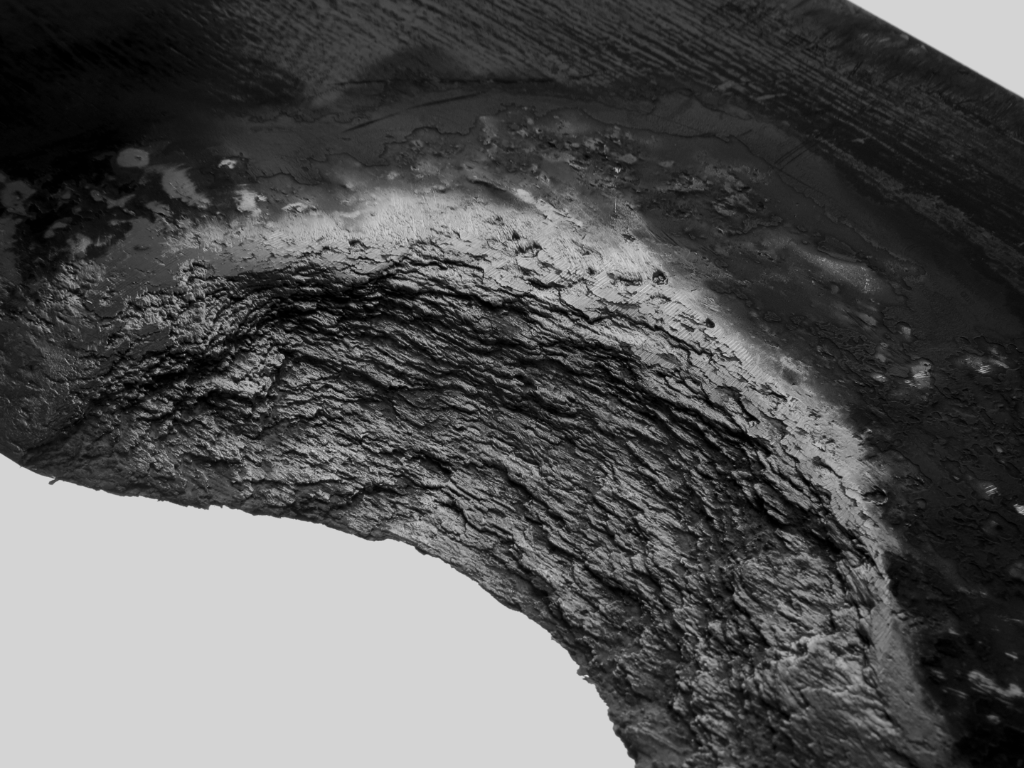 Corrosion on one of the propellers on the Gannet

When the corrosion begins it will set in and spread and will recur over and over even after repair. If this was a propeller blade on an aircraft required for flight it would have to be condemned and a new replacement fitted. As this is a static display aircraft Maurice will use car body filler to fix it purely for aesthetic purposes. 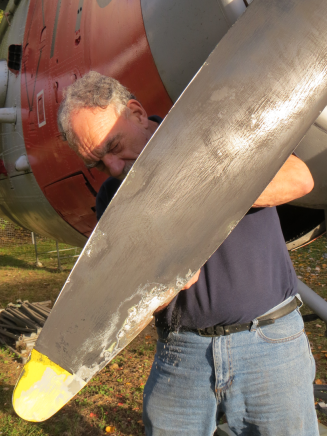 Maurice cleaning out an area of corrosion on a propeller blade on the Gannet in preparation for its repair.

In early summer 2017 the Gannet middle cockpit was damaged by a couple of visitors. They were taking measurements from the airframe in order to produce plans for a plastic model kit. Apparently in trying to move the middle cockpit canopy, they derailed it leaving it vulnerable to high winds and therefore dangerous. 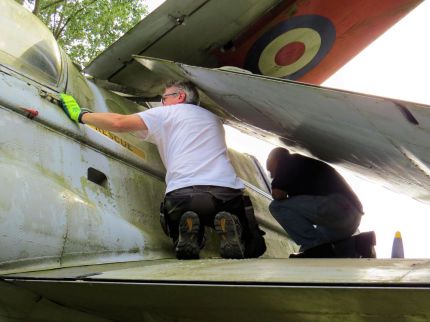 The canopy was removed and refurbished. The surroundings of the cockpit on the aircraft was also cleaned up ready for the replacement. 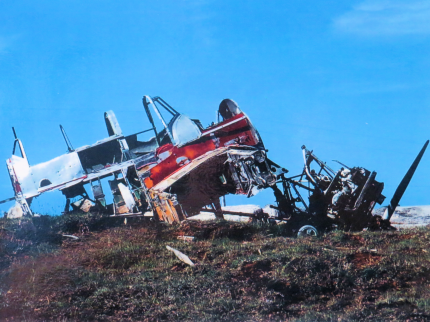 The forward fuselage of the Martinet had no cowling and no fixing points for a real engine, so the museum engineers did something quite remarkable; they fashioned the whole assembly out of wood and polystyrene including the spinner and propellers. 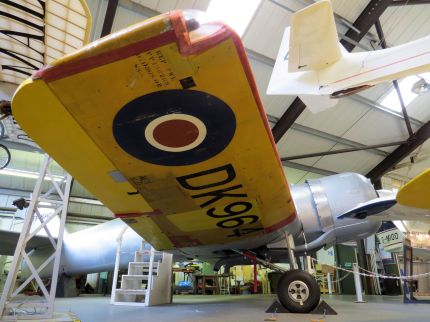 There were no wings for the Martinet but fortunately a pair of outer wings of a Miles Master DK964 were found. Master wing fixings match the fittings on the Martinet inner wing stubs so these were used instead. The Master wings are shorter giving the Martinet a wing span of 35ft 7in as opposed to 39ft. It was decided to leave the Master livery and registration on the wings.

The components of the framework of the SG.38 were originally held together using quick-drying glue. This age hardens and becomes brittle. Extensive parts had to be re-glued which was carried out by Chris. He also created a section of the wing which was not covered in fabric and is on display under the port wing. 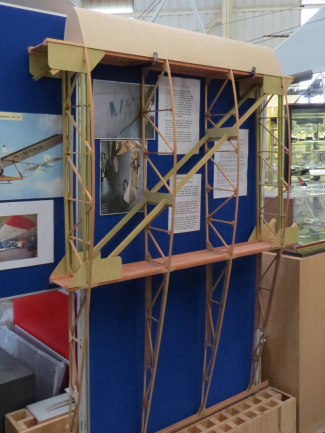 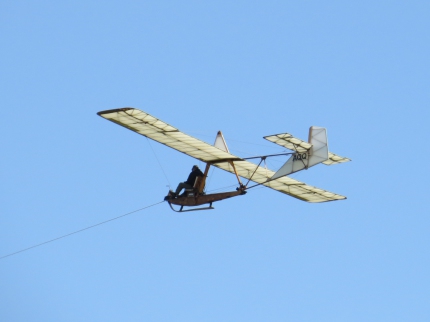 Another SG.38 being towed to height at Old Warden in 2015

In 1946, two young employees of Miles Aircraft designed and built this glider at Woodley Airfield and named it the Broburn Wanderlust. The two men were TE Brown and KW Radburn, the name, the name ‘Broburn’ being a conjunction of their surnames. Piloted by Miles Aircraft's Chief Test Pilot Hugh Rendall, it made its first flight in 1947. 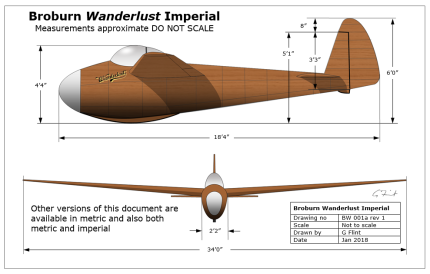 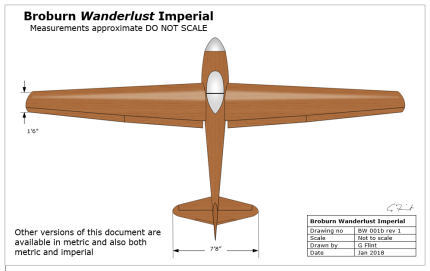 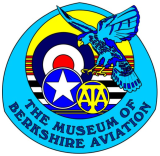